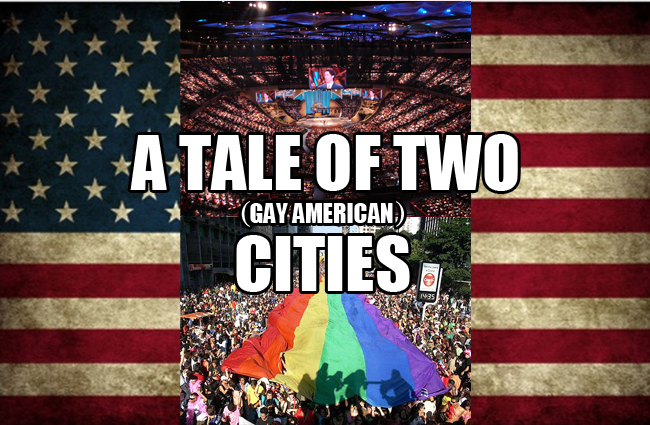 Yesterday I encountered another version of something that I must have experienced – and I suspect that you’ve also witnessed – a million (or more) times before.

In the aftermath of the Supreme Court’s suicidal (re-)declaration of war on God, I heard the story of a professing Christian who, when asked what the court decision meant to him and how he was going to deal with it, then responded with, “I’m prayed up and my bags are packed”. (See: “Supreme Court” Votes for Wrath of God Upon America.)

Meaning, of course, that he was waiting for the rapture.

He was just praying and waiting.

That was his response.

And in that moment – the moment in which I heard this American Christian’s self- and rapture-centered approach to dealing (or not dealing) with the situation biblically, it became even clearer that this attitude – this pre-emptive surrender, apathy, and laziness wrapped in false piety that has come to define American Christianity for generations now – is far more responsible for the cultural devastation we are witnessing than, say, Barack Obama or even the openly Pagan homosexuality advocates that lead Pride marches. (See: The Curse of Magic Christianity: Praying that God will do miraculously what we refuse to do through obedience.)

The culture is convulsing in anti-Christian revolution and all most American Christians care to do is more of the same, that being pretty much nothing. They’ve taken the bait of the enemy and come to believe that they are here to just passively observe and wait for Jesus to swoop down and do what He has commanded and equipped them to do through His Gospel-fueled Great Commission. (See: Encouragement from Satan.)

What we are witnessing today in America is the culmination of many wicked paths, one of which is a literature- and film-fueled path of dispensational surrender and pre-emptive defeat promoted and secured through the works of, among others, Hal Lindsey in the ’70s through to Tim LaHaye today. Left Behind theology and escapist “end times” perspectives have transformed American Christianity into one of the greatest forces of laziness and cultural disengagement in all of human history.

I know this all too well since I used to hold these views, and passionately so.

These ongoing, influential, best-selling literary contributors to the modern American church’s pre-emptive surrender of the culture reminded me of another novel of note written about two cities in a revolutionary time:

So begins the famous opening to the best selling novel in history, Charles Dickens’ A Tale of Two Cities.

The two cities that popped into my mind upon revisiting this legendary intro were two American cities. More specificly, two gay American cities, with each defined by very different aspects commonly conveyed through use of the term “gay”.

The one city is weak, lame, incapable of fruitful reproduction and unwilling to put forth meaningful effort to push life and culture in a truly positive direction. This is the American Christian city, immersed in passivity and false piety as it watches the world burn and waits for Jesus to come and do what He has commanded His people to do. (Actually, residents of this American Christian city have been conditioned to view the collapse of culture as a very good thing in that it can only mean that Jesus is even closer to rapturing them away, and who would want to delay that, right?)

The other city centers on legitimizing things like sexual perversion as a right and even a virtue. It is strong and committed to its cause. It works hard. It uses every means available to advance toward its goal. It is patient, persistent, and dedicated. It plans and works multi-generationally in accordance with long-term objectives. This is the American Progressive Pagan city, marching from victory to victory on the cultural battlefield, pillaging the pathetic American Christian city en route to complete cultural domination (a complete cultural domination that the American Christian city considers to be inevitable anyway, so why put up too much of a fight, right?).

The “age of wisdom” is actually more embodied by the American Progressive Pagan city as well, since it sees and applies wisdom in its careful, committed, methodical, multigenerational fidelity to its worldview and long-term objectives. The “age of foolishness” is on full display in the American Christian city, where most even now still ship their children off to the anti-Christ State for an explicitly anti-Christian “education” while going about their normal weekly routines, just riding things out and trying to enjoy life as much as possible before the rapture.

The “epoch of belief” seems to be on display with the Pagan Progressives, who actually believe in their worldview enough to do what it requires of them.

The “epoch of incredulity” is embodied by a professing Christian church that just doesn’t care about anything beyond itself. (See: Beware the “Gospel in a Bottle”.)

As a result, the “spring of hope” has come to the Progressive Pagan City and a “winter of despair” has settled in on the rest of us.

Now consider this: Our present cultural upheaval has been spearheaded and accomplished through a committed 3% or so of the population.

What if 3% of the population was, by God’s grace, actually on fire for the life- and culture-resurrecting Gospel-fueled Great Commission?

What if only 3% purposed by God’s grace to advance His Kingdom here and now with everything that He has given them? What if they spent all of their talent and treasure in that pursuit? What if just 3% took on a committed, multigenerational approach to the Great Commission?

How much might the culture improve over the next 150 years through the grace-fueled obedience of those people?

What if we stopped insincerely praying for solutions from God while ignoring those very solutions as He has already so clearly and lovingly provided them to us in His perfect, sufficient Word?

What if we actually repented and obeyed Him in matters of children’s education? (See: Redeeming Children’s Education: Confronting Our Satanic Approach to the Pursuit of Knowledge.)

What if we actually repented and obeyed Him in matters of economics and business? (See: Corporate America’s Big Gay Push (Or: “Mark of the Beast” economics, here we come!)

What if we actually repented and obeyed Him in matters of law and justice? (See: Note to ‘Merica: There is no “God-given right” to worship false gods. Repent accordingly.)

What if only 3% did this with the same vigor and multi-generational determination as the 3% who have already succeeded in dragging our culture to the gates of hell over the snoozing body of an apathetic, lazy, disengaged American “church”? (See: How to NOT stop the Big Gay Bullies that are raping the culture.)

You are the light of the world. A city set on a hill cannot be hidden. Nor do people light a lamp and put it under a basket, but on a stand, and it gives light to all in the house. In the same way, let your light shine before others, so that they may see your good works and give glory to your Father who is in heaven.” ~ Jesus, in Matthew 5:13-16

And Jesus came and said to them, “All authority in heaven and on earth has been given to me. Go therefore and make disciples of all nations, baptizing them in the name of the Father and of the Son and of the Holy Spirit, teaching them to observe all that I have commanded you. And behold, I am with you always, to the end of the age.” ~ Jesus, in Matthew 28:18-20 (emphasis added)

Tagged A Tale of Two CitiesChristianityDefeatDispensationalismEschatologyHomosexualityRaptureVictory