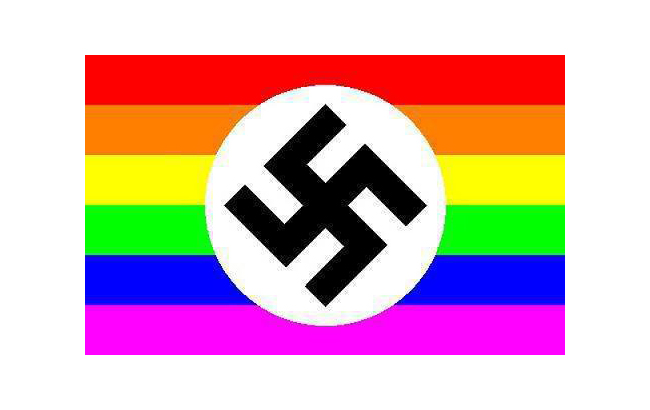 First off, let’s take a moment to duly note how pathetic and emasculated we’ve become here in the “land of the free and the home of the brave” when it is the assumed norm that American culture and civilization is going to be nagged, bullied and bought into compliance by a bunch of loudmouthed and fabulously malicious androgynous fruitloops.

And way to go “American Christian church” for leading the way to this big gay mess. (See: Judgment begins with the Church…not the Democrats.)

We’ve apparently become so sad, lame, weak and wimpified in our proud rejection of God that we’re no longer even entitled to have a “cool” villain or nemesis by whom we might meet our ultimate doom. No Russian or Chinese invasion for us (at least not yet, anyway). No rampaging Muslim hordes in the American heartland (at least not yet, anyway). No Darth Vader or Dracula type bad guy to do us in. No sir; we’ll have none o’ that.

Nah, instead we’re being finished off by the Kardashians, Glee and an army of Rupaul wannabes.

“We the people” have clearly established a new gold standard in the category of tragically comedic suicidal idiocy.

Perhaps the most pathetic aspect of the ongoing Pride parade that is American culture comes by way of those who are looking to “save us” by way of the same Christ-dismissing principles that got us here in the first place. Even at this ridiculously late hour and in light of the boatloads of Scriptural validation pouring down all around us, most professing Christians in America – especially the “politically conservative” ones – are still looking first and foremost to unbelievers and worldviews founded in unbelief for the salvation of their beloved America Idol.

The latest attempt by “good conservative Christians” to use the All-American virtues of religious pluralism (which God despises, by the way) and secularly defined tolerance comes by way of one of my favorite places: Texas. As reported yesterday in The Dallas Morning News, the Gaystapo and Gender Madness Fascists are all up in arms over some legislative proposals rolling around the Texas State legislature:

Leaders of civil-rights and liberal groups are warning Texas lawmakers not to damage the state’s economy and reputation by passing bills designed to undercut a possibly favorable ruling on same-sex marriage by the U.S. Supreme Court this summer.

As deadlines for passing bills begin to kick in this week, the Legislature’s two chambers could take floor action on Monday and Tuesday on as many as three bills on same-sex marriage.

Proponents say the measures are necessary to defend states’ rights and religious freedom against activist federal judges and gay rights zealots. Critics say the bills are blatant efforts to turn back the clock and deny equal treatment to people with a different sexual orientation or gender identity. (bold emphasis added)

Once again, please note that it’s not the Nature of God as revealed in His Word and through His Son that is to be defended. It is “religious freedom”…which obviously must include the “religious freedom” of folks like, say, for example: Satanists, witches and Muslims.

Or god. Or mother earth. Or Oprah or Thor or Iron Man or whatever.

You pick your god and I’ll pick mine.

And god (or Oprah or Spider-man) bless ‘Merica, of course!

The longer this madness rolls on – the more that “conservative Christians” cling to the America Idol and its core virtue of religious pluralism – the more apparent it becomes that perhaps the great lesson of our time (and perhaps even the primary purpose of America at this moment in God’s creation of history) is to demonstrate what pride does to any people who decide to reject the essential exclusivity of Christ as King in practice and plant their flag instead on “virtues” like the “religious liberty” to do whatever one pleases regardless of what God has to say about it.

How many times can we look the other way and pretend not to see the crystal clear contradiction between what we are doing and the binding, living Word of the one true God?! (See: Openly reject God’s First Commandment? YES! WE! CAN!)

How many times can we just smile, shrug our shoulders and once again dive deeper into satanic “solutions” for the consequences of rejecting the essential exclusivity of Jesus Christ as King in practice?!

How may times can we dare to “wonder” at the insanity of Bruce Jenner “transitioning” into a Republican Christian Woman, lesbians teaching kindergarteners about “being gay”, the increasing homo-fascist economic persecution of obedient Christians, U.S. Army Cadets marching in red high heels under the leadership of a lesbian general, the emergence of “Transgender Girl(?) Scouts”, and the purposeful obliteration of family and gender as concepts (much less constructs that are to actually hold our culture and civilization together)?

How many times can we claim “shock” at the relentless advance of the Big Gay Anti-Christian Bullies that are raping and pillaging the culture unencumbered by any meaningful resistance?!

How long will we ignore the glaring reality that our “religious leaders” have done as much as anyone to lead us to this place? (See: Have the “We will not obey!” Christian “leaders” repented of their role in bringing us to this hellish condition in the first place?)

How long can we go on pretending that our favored “experts” and “leaders” from the Pagan Right haven’t done as much as anyone (except maybe our “religious leaders”) to bring us to this place?! (See: Confronting the Gay Orwellian Party: Dragging the Pagan Right out of the closet and into the light. and So what if Bruce Jenner claimed to be Napoleon? Or a Tomato? What then, Rick Santorum?)

How long can this go on?

How long will we resist and rebel against the Gospel command to repentance? (See: Why Americans don’t do repentance.)

How long will we refuse to submit to the Christ that we so loudly and proudly claim with our lips?

This is not a joke.

This is not a drill.

There are not multiple viable options or solutions for what ails us.

Thomas Jefferson, gifted as he was in so many ways, cannot save us.

The U.S. Constitution, beautiful as it is in so many ways, cannot save us.

The Pagan Right, appealing as they are to our “itching ears”, American pride and vanity, cannot save us.

Religious pluralism, secular tolerance and the “freedom to worship” false gods cannot save us. They can only continue to kill us.

He has done so with loving, life-giving clarity, and He commands us to repent.

If we do, we’ll repent, believe and be saved.

It really is that simple.