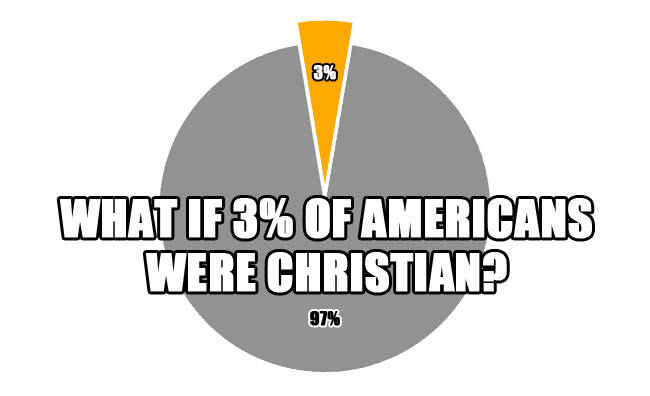 One way that America’s ongoing cultural disintegration is particularly striking is that most of those guiding and shaping our culture are professing Christians. Most of the people writing books, making movies, winning elections, and managing the pursuit of everything from art and law to education and civil government are, in fact, professing Christians.

When something like Fifty Shades of Grey sells a gajillion copies (and movie tickets), it’s largely professing Christians in America who buy them.

When the preservation of State-run children’s “education” is offered up for discussion, the vast majority of those who step up to defend State-run schools are professing Christians. The same goes for other unbiblical, culture-destroying State-run (and Statism-advancing) programs like Social Security, Medicare, food stamps, unemployment benefits, and the like. (See: Kicking the Socialism Habit: Do we love the Lord (and one another) enough to confront and correct our dependence on the State?)

When 1,000,000+ baby boys and girls are openly murdered for convenience via abortion each year in America, it’s often professing Christians who are choosing to have their own child killed.

This is what Christianity has come to look like in America.

This is what it produces.

These are its fruits.

Poll after poll after survey after survey, so long as they’re kept nice and vague (just the way Americans tend to like their religion), results confirm that even now most Americans claim Christianity.

Most of these surveys indicate that the majority of Americans claiming Christianity is vast – a recent poll conducted and published by ABC News claimed that “eighty-three percent of Americans identify themselves as Christians”.

Which is ridiculous, of course, but that’s what the “professional” surveys and polls come up with time and again.

So how many actual, supernaturally transformed New Creatures in Christ are there in America?

That much seems plain.

While I’m not proposing a rock solid answer or route to a rock solid answer as to precisely what percentage of Americans are truly Christian, I respectfully submit for your consideration that, based on all that is easily (and often painfully) observable and measurable where American culture is concerned, it seems at least reasonable to suggest that the percentage of Americans who actually evidence the biblical fruits of true conversion is very, very small. As in: single digit small.

Back in July we asked What if America had as many Christians as it does gay activists?

That’s what it took to move America to where it is now.

That’s all that was required to transition us from a people who at least loosely based their morality on some vaguely understood and appreciated Christian foundation into one that is openly and proudly based on self-centered, self-referential, and self-serving lust. (See: Limp Wristed Gospels Make Limp Wristed Cultures.)

That’s how much commitment on the ground was needed to shift us from cheering Wheaties-box Bruce Jenner as an example of All-American masculinity into a people that applauds Vanity Fair cover “Caitlyn” Jenner as the embodiment of “bravery” and “courage”. (See: Bruce Jenner Transitions Into Republican Christian Woman.)

Of all the many great and terrible lessons being taught to us now through the committed, believing, active 3% who have successfully stormed and pillaged the culture, one of the greatest and most important is this: 3% is enough.

With persistence, 3% is enough to move the culture from one extreme to another.

With belief in practice, the dedicated actions of 3% can accomplish what seemed impossible only 10 or 20 years earlier.

With faith in action, 3% can fundamentally change the world.

As much as it hurts, let it take root.

As much as it stings, let it linger.

As much as it exposes about our laughably non-Christian professing Christian culture in America over (at least) the past 100 years, let it take hold. (See: The Little gospel That Can’t.)

Then ask the question: What if just 3% of Americans were as committed to Christ in action as the 3% who are at this moment dancing on the grave of our dead culture?

What if only 3% of Americans took seriously the comprehensive life- and culture-defining reality of the Gospel-fueled Great Commission? (See: The Awesome Gospel.)

What if a mere 3% of Americans we consecrated by the grace of God to the propagation of His Kingdom through loving obedience to His crystal clear command to take every thought captive and make obedient disciples of all nations (including – and starting with – our own)? (See: Matthew 28:18-20)

What would our law, politics, economics, art, and culture begin to look like then? (See: What does Jesus bring to politics, education, law, and economics?)

Put another way: What if just 3% of those living in “the Christian nation” of America were actually Christians?

Whatever the actual percentage of Christians is in America, this is a question worthy of consideration. It is a question that should challenge, convict, and inspire us.

After all, if just 3% of passionate Pagans (sex/gender chaos advocates) have managed to turn our culture on its head in no time at all, then what does that tell us about the relative power and passion of those who claim to be operating from a “conservative Christian” perspective on the other side of the socio-political spectrum?

A mere 3% (or less) of radical advocates of a thoroughly satanic worldview have become the tail that is wagging the dog, and that sort of thing is only possible when that 3% is left unopposed by nearly all of the remaining 97% of the culture it is dominating.

Which seems to indicate that we have less than 3% on the other side to act as, at the very least, a serious countermeasure.

If a 3% sliver of a slice of passionate Pagans has been able to do what has been done to this culture in just a few generations’ time in the name of false gods, false religion, and a satanic worldview devoid of any true power or life, then what might just a 3% sliver of Spirit-filled, supernaturally transformed New Creatures in Christ acting in accordance with the Gospel-fueled Great Commission be able to accomplish in this culture over two or three generations’ time?

Let’s find out, shall we?