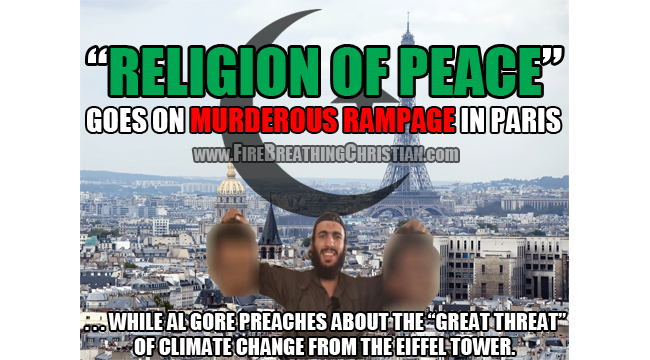 Terrible (and terribly revealing) things happened yesterday in Paris at the hands of a few dedicated, well armed advocates for what we are told again and again is “a religion of peace”. And all major media coverage of the nightmare that’s pierced the heart of France has dutifully avoided each and every one of the most important points to be understood in the wake of these tragic events.

While God and His Word speak plainly as to what is going on here and why, our Pagan Political Right and Pagan Political Left “leaders” will have none of that truth. They and their accomplices permeating State- and Corporate-run media are now, as is always the case with these sorts of events, doing everything within their power to keep us looking away from biblical truths that would actually empower us and set us free, keeping us focused instead on the next installment of a State-empowering narrative that has become all the rage since 9/11. (See: Problem>Reaction>Solution – Why we will beg to have our freedoms taken away and go to war forever.)

What we have to do now, and from here on out as Christians, is begin and end our analysis of events like this by considering them in light of very basic biblical truths:

Is it truly lawful for the worship of false gods like Allah to be openly allowed anywhere in God’s creation? (See: Note to ‘Merica: There is no “God-given right” to worship false gods. Repent accordingly.)

Is true “religious liberty” something that allows for the open worship of whatever idol or false god one chooses? (See: Why do we allow the open practice of Islam, witchcraft, and Satanism in America?)

Is there anywhere in God’s creation that His Law is not binding? Is there any nation or people or group of “leaders” anywhere in God’s creation who have truly been given the authority to make lawful that which God has forbidden and condemned as lawless? Is there any reason to expect that “We the People” or the people of France or any other people in any other place will ever be able to do anything but slide deeper and deeper into darkness and death through the pursuit and application of “law” that is in opposition to the clearly revealed will of God?

There is no basis in reality for expecting any culture to ultimately achieve anything better than disintegration and death when it presumes to define law, economics, worship and the like in manners that contradict the unbreakable Law of God.

Yet here we are in America and throughout the West doing just that, proudly pretending that we can make “law” as we see fit and that it’ll all be just fine in the end.

So God gives us Paris.

He gives us reminders.

He gives us warnings and examples.

He provides these things in conjunction with His Gospel command to repent and submit to His Son as King in practice. (See: Will America repent or will America be destroyed?)

As of this writing, the latest CNN report places yesterday’s death toll at 153, casualties realized even as Al Gore was preaching about the “great threat” of  “Climate Change” (AKA “seasons”?) at the Eiffel Tower.

Our approach to worship has consequences.

Our approach to law  – God’s unbreakable Law – has consequences.

Today’s “Exhibit A” is Paris.

(Thoughts on this subject continue in ISIS: Priceless Tool of American Statism.)