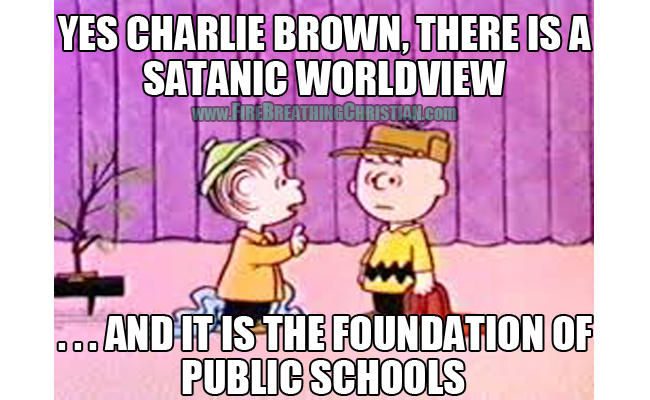 If there’s one thing most “American Christians” will not tolerate, it’s the removal of Christian sprinkles from their otherwise anti-Christian worldviews and practices.

Among the most glaring and impactful of these thoroughly anti-Christian practices is the willingness (and often eagerness) of professing Christians to ship off their little five-, six-, and seven-year-olds to State-run “education” systems in which they will be immersed in a worldview and approach to the pursuit of knowledge lifted directly from the serpent’s tongue in Genesis 3 (and echoed later in the pages of The Communist Manifesto).

While one would hope that the above indisputable description of American public schools’ approach to children’s education would be enough to have Christians (particularly Christian leadership) openly and vigorously opposing such an evil system across the board and at every opportunity, that’s simply (and sadly) not the case in America.

Instead of opposing this fundamentally satanic model for the pursuit of knowledge and the training of minds in anti-Christian thought, American Christians and their “leaders” tend to want to protect, defend and prop up this system consecrated to the denial and opposition of Christ’s lordship via satanic “education”. Here are just a few examples of this tragic approach in action over recent months:

Regardless of how overtly, flagrantly, and obviously satanic the State-run school model becomes, “Christian leaders” in America still largely refuse to preach the Gospel in detail to the subject of children’s education and, in conjunction with this profound betrayal of their charge to protect and correct their flocks, they actually encourage Christians to continue feeding their children to the beast of anti-Christian “education”. (See: Ten problems with the “salt and light” excuse for feeding children to the State. and Why is the beast of Socialism eating our children? Ask your pastor.)

Even so, and as we already mentioned, there are still some things that “American Christians” will not tolerate when it comes to the education of their children. Oh sure, the essential personal foundation (hint: Jesus) for understanding any subject in all of God’s creation – including art, economics, history, science, music, and everything else – can be ditched, avoided, and ignored, but one thing you just don’t mess with here in ‘Merica at Christmastime is…A Charlie Brown Christmas.

As reported last week in the Lexington Herald Leader:

When students perform the play “A Charlie Brown Christmas” at W.R. Castle Elementary School in Johnson County on Thursday, the scene in which the character Linus quotes from the Bible is set to be deleted.

Johnson County Schools Superintendent Thomas Salyer told the Herald-Leader Tuesday that Christmas programs across the district were being reviewed for possible modifications of religious references. That news had led people to protest outside school district offices for a second day Tuesday.

Principal Jeff Cochran said all references to the Bible were removed from the Christmas play after he and others in the district received a message from Salyer on Dec. 11 that said in part:

“As superintendent of Johnson County Schools, I recognize the significance of Christmas and the traditions and beliefs associated with this holiday. Over the past few days, there have been several rumors indicating that there would be no Christmas plays this year at our elementary schools. I want to clarify that all programs will go on as scheduled. In accordance with federal laws, our programs will follow appropriate regulations. . .”

…American public school regulations which of course preclude the acknowledgment (much less pursuit) of Christ as King in practice…which just so happens to be the essential, non-negotiable core of true Christianity.
.
Sadly, this essential core is nonessential at best even to most professing Christians in America.
.
And why?
.
Because that’s what they’ve been educated to believe, silly.
.
See how that works?