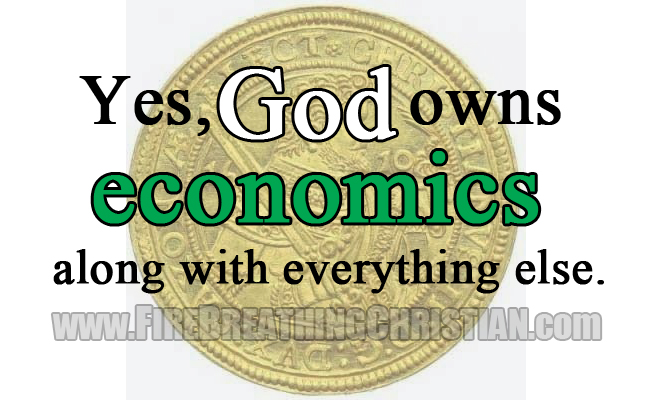 Isn’t it great that we have the anti-Christian black magic of fiat economics and the Federal Reserve to “protect” us from anything resembling a truly free and real commercial marketplace? (See: Fiat $lavery: We have been bought and paid for…with nothing.)

Isn’t it awesome that we’ve utterly dismissed the Nature of Christ as revealed in His Word as the basis upon which we understand and pursue economic activity? (See: What is the primary goal of business? – Hint: It’s NOT what Rush Limbaugh, CNBC, and Forbes are telling us.)

Isn’t it sweet that we have been conditioned to actually believe that we are living in a land of “freedom” – including economic freedom – when we are far from such a place…and being led farther away from it with each passing System-induced “crisis”?

While we are relatively free as compared to, say, North Korea (for now), we are far removed from the image of America that is relentlessly pitched and promoted by way of the State-run “education” and Corporate-managed pop-culture in which we are immersed.

We’re so not free in “the land of the free” that we are not even allowed to actually own our own homes…so that we can be forced to fund things like the Tenth Plank of The Communist Manifesto (AKA public schools) in America. (See: How “free public schools” make us all renters from the State.)

So yeah, we’re in a pretty bad spot right now.

Worse still is that we’ve been so thoroughly programmed and conditioned for so long that we are far more prone to defend the tools of our bondage (Social Security, public schools, Medicare, the perpetual war machine, etc.) than we are inclined to biblically confront and correct them.

Few fictions have been more ridiculously redefined and then pounded into our heads than that of the “free market” concept in America. This makes perfect sense once one stops to notice, since the capture and subsequent corruption of originally wonderful concepts and terms like “free markets”, “free speech” and even “freedom” itself is central to the promotion and protection of American State power over its people.

So when the System of systems propping up the anti-Christian pursuit of economics, education, law, and pretty much everything else in America begins to sway, buckle, and crack – as it has been for some time now – we should be anything but surprised…and anything but fearful.

We should be anything but surprised because here in God’s creation, everything – including economics – can only thrive in the true, lasting sense insofar as it is practiced in accordance with His Nature as revealed in His Word.

We should be anything but fearful because fear of man and the fear of the things of the world is the antithesis of faith. We should always and only fear the Lord. When we displace the fear of the Lord with the fear of the world, we open ourselves up to endless manipulation at the hands of those who would guide us to…well…where we are now and the much worse that’s right around the corner. (See: The Fear-Fueled Politics of American Statism.)

Last week in Chinese Dragon Eats Economy: Stock Market off to Worst Start Ever we chronicled the worst start to a new year in U.S. Stock Market history and tried to touch on how the fundamentally rotten, anti-Christ foundation of our economic system is incapable of ultimately producing anything better than increasing bondage.

This week there have been a few interesting reports posted elsewhere that serve to help us better understand exactly what is happening through the West as a result of our pursuit of what God calls an abominable economic construct (see: Proverbs 11:1). In Sell everything ahead of stock market crash, say RBS economists, Nick Fletcher of The Guardian reports on a remarkable warning from the Royal Bank of Scotland:

Investors face a “cataclysmic year” where stock markets could fall by up to 20% and oil could slump to $16 a barrel, economists at the Royal Bank of Scotland have warned.

In a note to its clients the bank said: “Sell everything except high quality bonds. This is about return of capital, not return on capital. In a crowded hall, exit doors are small.” It said the current situation was reminiscent of 2008, when the collapse of the Lehman Brothers investment bank led to the global financial crisis. This time China could be the crisis point.

Now factor that in with ZeroHedge‘s recent posting of You Know Negative Interest Rates Are Bad When…, in which we’re treated to some details regarding the insanity (and now necessity, at least from fiat-economic “expert” perspectives) of negative interest rates for savings:

Switzerland is famous for being punctual.

The Swiss are so culturally punctual that they even tend to pay their taxes well in advance of the filing deadline.

So it was quite a shock to hear this morning that the Swiss canton of Zug is asking its citizens to delay paying their taxes for as long as possible.

The cantonal government doesn’t want to take in a pile of cash, only to end up paying the bank interest on all the tax revenue.

Let that sink in for a sec.

Can such an approach as this be described as rational? Wise? Or even sane?

And that’s a huge reason why there’s such a push to outlaw cash.

If even a small percentage of depositors decided to close their bank accounts and withdraw all their savings in cash, the banking system would collapse.

There simply isn’t enough physical cash in the system.

Plus most banks are so highly leveraged, and they lack the liquidity to honor any meaningful amount of withdrawal requests.

This is one of the fundamental dangers of negative interest rates.

Central bankers, in an absurd, desperate attempt to generate inflation, are accomplishing nothing more than destroying the banking system.

And even when it doesn’t work– even when the numbers prove that their ridiculous goal of increasing inflation isn’t working– they just keep trying the same thing over and over again, making interest rates even MORE negative.

These people have broken the concept of money.

Money is one of the most important social technologies in the history of the world, almost as important as language.

But they’ve destroyed that. And it’s so obvious now.

But cutting the price of money (interest rates) so far into negative territory, money has become so worthless that even a government doesn’t want it.

Just the sort of economic madness one would expect as the eventual, inevitable consequence of pursuing economics in open opposition to the Author of economics.

May God grace His people with the confidence, wisdom, and opportunity to prepare, proclaim, and apply His Gospel to the realm of economics in their lives, families, churches, businesses, and communities, so that they might be His shining city on a hill as all counterfeit kingdoms properly and predictably crash and burn around us.