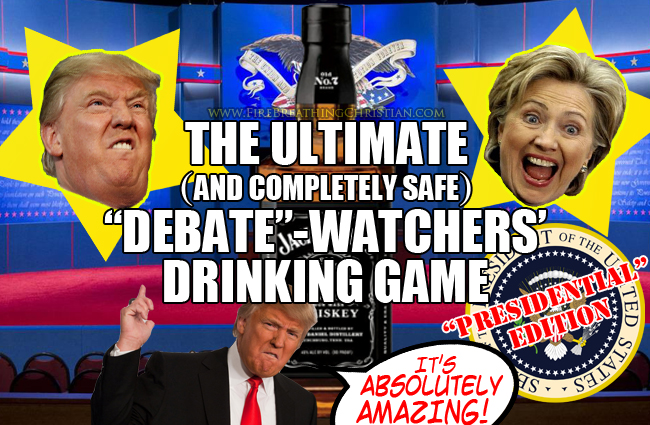 As Debate Night approaches, America is as fearful and frazzled as ever. Many weak, rudderless Americans are terrified (and therefore easily manipulated by fear) and many questions are begging to be answered. Questions like: Which candidate will be more overtly satanic in tonight’s debate? Habitually twitching and passing out Hillary, or the personification of unrepentant pride that is Donald Trump?

And it doesn’t get any easier from there.

Which candidate will more actively cheer and promote the ever growing power of the Orwellian American State?

Oh man…that’s a tough one, too!

And which candidate will more passionately argue for a gigantic globe-dominating military that we obviously cannot afford because we are BROKE. (See: How can a “broke” country have the biggest military in the world?)

Which candidate will more completely avoid calling anyone’s attention to the fact that our whole economy is a cruel fiction based upon the satanic contrivance of fiat currency (money that some create out of thin air so that they can then control and practically own everyone and everything beneath them)?

Or, put another way in a more simplified form: Which candidate will more clearly personify the judgment of God upon a proud, unrepentant America?

Again, it’s hard to say. They’re both so committed to the same evils in so many of the same ways that it’s hard to give anyone a real edge. Talk about a nail biter!

Even so, and despite the overtly satanic, Statist worldviews that will be spewing forth from both featured sets of habitually lying lips on stage tonight, there is some real value to be found in this tragi-comedic event for those who are inclined to watch for the right reasons.

“As a reformed (and reforming) political junkie who still enjoys these sorts of events from what I hope is an ever-more Christ-centered and Great Commission-fueled perspective, I’ll definitely be tuning in. But where the whole “we must support the lesser evil put forth by the System” used to actually work on me, these days events such as this tend to inspire more of a “watching a train wreck in slow motion” curiosity combined with a desire to observe and critique this episode of The American Political Puppet Show from a biblical perspective so that maybe, just maybe, something informative and helpful might be gleaned and used to advance the Kingdom of God.

Just remember to stay sober-minded and “test all things”…especially the things said at this “debate”.”

The fact that it’s come down to Trump and Clinton ought to tell us something.

The fact that God is showing us so much about ourselves with so much (often jarring and gag-inducing) clarity ought to tell us something.

That fact that we have been given yet another day to repent, believe, and submit to Christ as King in political practice even as we allow ourselves to be wrapped up and immersed in this idiotic puppet show as though the votes cast for either of these clowns has the capacity to save us or “make us great again” ought to tell us something.

Of course, the things that we ought to be getting are precisely the very things that will be religiously avoided by the two anti-Christ candidates yammering on stage tonight.

That’s the name of this game.

That’s the point of the Trump/Clinton Show.

Distraction away from the One that can actually save us, and distraction toward more of the very things that are enslaving and killing us.

So enjoy the show…as you are able…