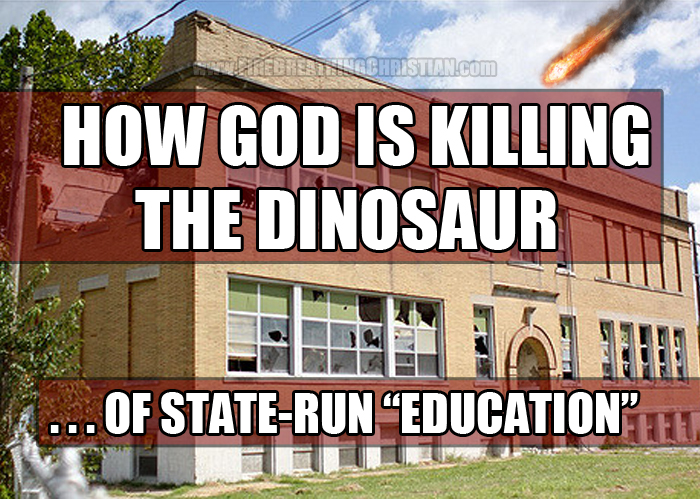 But perhaps the most exciting (and important) news on the dino front is that dinosaur models of education are dying, too.

By God’s grace and right in the nick o’ time, an age of radical decentralization is beginning to dawn all around us, and while the Powers That Be will do all that they can to deny and suppress the decentralization of power that they know must, of necessity, destroy their long-running schemes and massive systems of control, there’s nothing they can do to prevent the inevitable ultimate triumph of decentralization.

At this very moment, God is raising up technologies and tools the likes of which were relegated to sci-fi fantasies just a generation or two ago. God-given technological blessings like the Internet, personal computing, 3D printing, and increasingly affordable/complex/capable robotics are coming together to empower God’s people in ways that absolutely terrify those atop the System of systems under which we currently (and temporarily) live.

This development is, in strict theological terms, “very cool”.

The massive, bureaucracy-laden, empires of the Corporate/State systems now dominating life in America and throughout the West are coming down.

Dinosaur, Fake News mega-outlets serving the Orwellian State are cracking up and beginning to collapse. The same goes for many Dinosaur Corporate business models, Dinosaur massive standing army (military industrial complex) modelsm and Dinosaur central government power models (like those run from Washington DC), each of which is built upon the farcically unstable foundation of Dinosaur centralized economic/banking models that allow an elite few to literally make magic money out of thin air in order to prop up all of the other Dinosaur systems in question for the purpose of maintining control (and practical ownership) over everyone and everything beleath them.

The Dinosaurs of old media, old politics, old business, old economics, and old education, however much they may roar and howl on the way, are going down nonetheless.

Their time is passing, and we should thank God for that, but in an active rather than passive manner, understanding that He has given His people both His Spirit and His gift of decentralization-enabling technology so that we might do things – great and challenging things – with those gifts.

Nowhere is the trend toward decentralization more important to celebrate, embrace, and encourage than in the realm of children’s education.

The old brick and mortar model of bussing masses of children to a central school/factory for large-scale mind-sculpting on a State-managed assembly line is dying, and quickly. The idea that we are well served to ship our children off to the State for explicitly anti-Christian indoctrination is becoming more and more obviously idiotic with each passing generation of State-“educated” drones who are more Statist, more Leftist, and more anti-Christian than the last.

In an age of incredibly individual- and family-empowering educational tools like personal computers and the Internet, the sheer backwardness and wastefulness of the Dinosaur model of State-managed children’s education is becoming more and more painfully obvious even to many who have nothing in the way of a Christian worldview.

For those of us who have been graced by God with a Christ-centered approach to reality, this is an incredible time of matchless opportunity.

We are blessed to live in an age of dying dinosaurs.

We are even more blessed to play a critical role in bringing about their soon coming extinction, all by God’s grace and all for His glory.

[Reminder: I will be kicking off the third annual Great Education Forum this Saturday (April 29) with a presentation on the satanic foundation of public schools. The event will be hosted at the New Geneva Christian Academy in Appomattox, VA, and will begin at 1 p.m. (Eastern Time). Admission is free.]