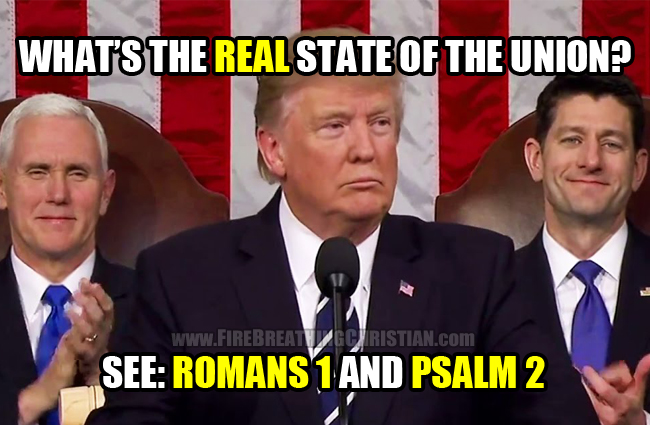 It’s that “State of the Union” time again, a time when political leaders at State and Federal levels give grand speeches yammering on about how great, awesome, and incredibly well off we are.

While some of the points they make are rooted in truth, most are not.

But how do we know which is which?

How are we to know which claims are right on, which are bad fiction, and which are somewhere in-between?

As with all important questions, the correct answer begins with Jesus.

As in: What has Jesus told us about the state of our culture? What has He said about who we are as a people right here and now in 2018 America and where we’re going from here?

And make no mistake: He has said a lot.

I was honored and blessed to share this simultaneously beautiful and terrifying truth with members of the Tennessee General Assembly this morning. I spoke for 30 minutes on this stuff during a devotional period that runs during Session on Wednesday mornings, and I’ve recently had the opportunity to start twice-weekly Bible studies on campus, so there’s been a whole lot of supercool stuff going on in Nashville lately.

I look forward to sharing much more about that soon, but for now let’s get back to Jesus’ multiple answers to the State of the Union question…

At this point, reading through Romans 1 and Psalm 2 is a really good idea. (And maybe check out Want to see America in Scripture? Try Psalm 2.)

Rather than dive deep into actual truth (which can be very challenging and convicting on a personal level) where the state of our nation, communities, families, and lives are concerned, we’ve been conditioned to chase after endless side-show distractions featuring political puppets and media talking heads aimed at keeping us focused on everything but what we need to know in order to actually identify, much less productively pursue, real freedom, liberty, peace, prosperity, and the long-lost art of adulthood.

So guys like Barack Obama and Donald Trump ramble on annually about how awesome we are as a people to the thunderous applause and adulation of a perpetually rotating 50% pool of the politically active population.

While the laughably broken systems of fiat-currency-fueled State power roll on and on, tightening their grip with each passing generation. Newborns, if they’re allowed to live, are drenched in red ink from day 1, sold into debt bondage to cover the “benefits” of past and present State program Ponzi payment recipients, and then find themselves shipped off to the State for “education” so that they might ever find a clue or begin to notice the million or so rank evils and tragic flaws that define the all-American System of systems into which they were born.

And, sadly, our children, because of our clinging to pride over repentance.

This is the judgment of a God who has spoken, in detail and with crystal clarity.

He has told us exactly what the state of our nation is and what must be done to save it.

He has told us exactly how wicked and prideful we are, what we deserve, and what we will soon get as a people if we do not do that most anti-pride of things and repent.

Yet we won’t have it.

We want things our way.

We the People are not about to submit to Christ as King over our politics, law, education, or anything else…well, except maybe our dead religion. Yeah, He can be Lord over that.

We have no use for true, explicit repentance to Him…just like the leaders God has placed over us.

The thought of Christ ruling over us in detail and in practice right here and now is a terribly tyrannical sort of thing to our Bush/Clinton/Obama/Trump/America worshiping minds. Here in America, we submit all gods – Christ included – equally under the authority and power of our one true god in practice, that being the American State. (For more on this important subject, please read State-Supervised Polytheism: The Official Religion Of America.)

That’s just how we roll.

And always proudly, of course.

Which is why the one and only actual God has given us over to our pride and is in the process of grinding us under His heel. (Again, see Psalm 2 and Romans 1.)

We covered this in some detail during a previous State of the Union season in which Obama was the flavor of the moment atop the American system-of-systems. Here’s some of what we shared then:

“One of the most telling signs of our vulgar and prideful animosity toward Christ the King is our comfort with the knowledge that He will not be addressed by our “leaders” in a formal, official context in anything but the most vague, superficial sense, if at all. He may be cited or used as an ornamental prop when deemed useful, but never anything more than that. And we all know it.

This now quite comfortable and normative dismissal of Christ the King is both a sign of and reason for our presently unfolding plunge into cultural oblivion.”

Whether a Clinton, Bush, Obama or Trump sits atop the American system-of-systems under which we now (temporarily) labor, we must understand that “We the People”, in our current (and long-running) approach to things, are begging for the wrath of God to squish us like bugs and sweep us off the face of His earth.

We’ve embraced the pride-fueled death-march of a Romans 1 culture and at nearly every turn we proudly provoke the King of kings to do that nation-crushing thing He so lovingly warns us about in Psalm 2.

Contrary to everything you will hear from the likes of Bush, Clinton, Obama, Trump, CNN, Fox News, MSNBC, and pretty much every other State/Corporate-owned tool of propaganda, apart from explicit repentance in our approach to politics, economics, law, business, family, marriage, and everything else, we are (and deserve to be) a doomed people.

That is the state of our union.

Repent accordingly…while He graciously grants the time to do so.