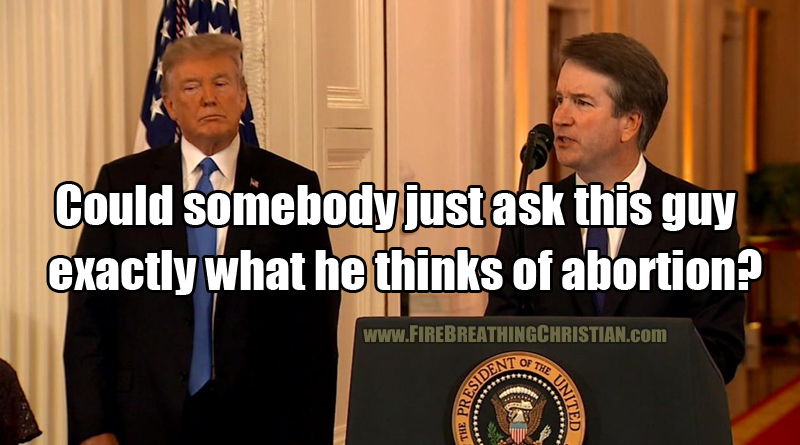 Of all the Orwellian doublethink idiocy that passes for “serious political conversation” these days, none is more Orwellian or more idiotic than the prevailing notion that a President (or anyone else) shouldn’t dare ask in a straightforward manner what the exact position of a judge (or anyone else) is on abortion.

Could it be that maybe – just maybe – one of the big, bad, and painfully obvious reasons we keep getting Republican Supreme Court Justice nominee after Republican Supreme Court Justice nominee who ends up supporting abortion from the bench is that…*drumroll*…we don’t bother to ask them exactly where they are on the issue of protecting human baby lives before nominating or confirming them?

Maybe I’m just spiffballing here, but this sure does seem incredibly stupid to me, and the track record of Republican-SCOTUS formed courts is, if we’re honest, basically a bloody mountainous mass made of the dismembered bodies of tens of millions of baby boys and girls.

It’s not “smart” or “sophisticated” to purposefully avoid these necessary questions.

It’s not “politically savvy” or cool to play this moronic game.

If we really want judges who will overturn Roe v Wade and abolish the mass murder of babies in America, why not just make it plain in the SCOTUS hiring process?

If the Republican Party really wants the systematic government-protected mass murder of American baby boys and girls to end, then why not be clear and tackle the issue head on?

Ironically, it’s Democrat Senate bigwig Chuck Schumer who’s threatening to make these sorts of “what do you think about abortion” questions a part of the official confirmation process.

And, just as ironically (but not surprisingly), it’s Republicans who are out in force decrying such a move.

I heard a Republican U.S. Senator on “conservative” talk radio just this morning talking about how crazy and wrong it would be to actually ask such questions of the SCOTUS appointee. He went on about how “the Ginsburg rule” prevents such an approach.

This is the kind of now-routine garbage that flows from our controlled/contrived political puppet show. It’s also the sort of bilge that inspired us to post Just in case you still think Republicans are ever going to actually stop abortion…, wherein we considered several points that seem worth reexamining right about now:

“So which of the two All-American Pagan political parties gave us the majority of Supreme Court Justices who gave us “legal” abortion in America?

This is why, despite all of the rhetoric and posing and nibbling at the edges, the Republican Party has no intention of ever actually doing what so many Christians and other “pro-life” advocates claim to want. The GOP isn’t about solving this problem by taking a biblical stand against child sacrifice. The GOP is about preserving its “good cop” role in the controlled political puppet show that is American Corporate Politics, and it does this by, among other things, constantly pretending to be “pro-life” (and “Christian” too in some vague, never-defined-biblically-in-detail).

Stand clearly and unwavering on the Word of God.

Stand unequivocally for the lordship of Christ the King over us here and now in every realm of life.

That is our one and only true hope…and that is the one thing that you will never hear pitched by the Pagan Political Right.

How many mountains of dead babies will it take for us to accept this truth and repent accordingly?”

The national Republican Party and its Pro-Life profiteers/distractors/tools don’t even want us to know in a simple, straightforward and clear manner whether their hand-picked SCOTUS appointee thinks unborn human babies are actually unborn human babies and are therefore worthy of respect and the most basic protection.

What are they afraid of?

That much is clear…or should be by now, anyway.

May God grace this proud, murderous land with a broken spirit of repentance…while there is yet time. May God move us to abandon our America idols and submit to Him as King before He breaks us into pieces and grinds us underfoot as we deserve (see: Want to see America in Scripture? Try Psalm 2.)