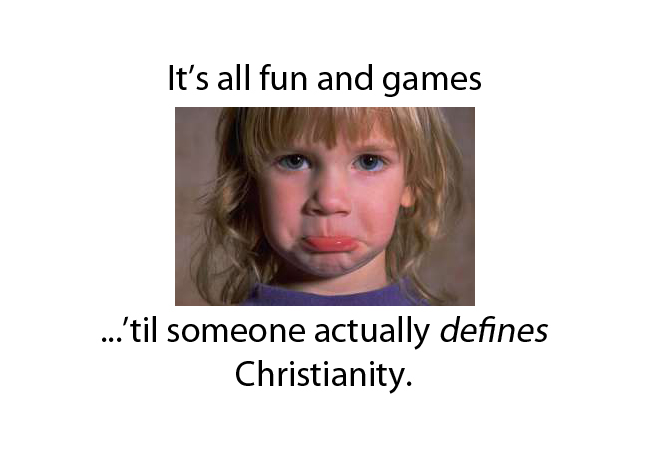 Like a kid who desperately wants to ignore the increasingly clear meaning of increasingly bad report cards, American “Christians” have been conditioned to give themselves a million fantastically childish ways out – a never-ending list of reasons to dismiss any and all reports of their persistent failure and betrayal of both the culture in which they’ve been placed and the Lord they claim with their lips.

So it is that they look around at the imploding wreck of a civilization smoldering around them and loudly blame everyone but themselves for the catastrophe.

But it is never, ever their fault.

Their religion doesn’t allow for such a concept.

Their religion – usually a version of America worship with some Jesus lingo sprinkled on top – never encourages them to test themselves and their most cherished views on politics, economics, patriotism, business and the like by biblical standards. (See: The America Idol: How “Christians” Worship and Enable the Anti-Christ State.)

Not so surprisingly, their favorite (usually openly unbelieving) “experts” and “leaders” all agree and support that approach at every turn. They have no trouble finding men and women to feed their “itching ears” that they want to hear. (See: Confronting the Gay Orwellian Party: Dragging the Pagan Right out of the closet and into the light.)

Their religion, while it teaches them to use the name of Christ, openly dismisses practically everything that He has clearly said about His authority here and now and the resulting power and mission of His true church on His behalf. (See: Encouragement from Satan as opposed to The Awesome Gospel.)

Their religion pitches a “lord and savior” who is only lord “in the hearts of people” or in their prayer closets or in their church buildings or in formal worship-ish events scheduled to take place under the watchful supervision of government 501(c)(3)-sanctioned religious facilities and organizations. Their little god is the lord of a heaven and a kingdom that is somewhere “out there” off in the future and/or in some far away place, always respectful of the rightful rule of men here and now in what they call and actually imagine to be “the real world”.

So it is that they expect a smoldering culture in their “real world”.

And whaddaya know? Their predictions and expectations are being fulfilled all around us!  Their idea and realization of the “real world” would seem to be Exhibit ‘A’ in the category of “self-fulfilling bad prophecy.”

So I guess that American religion has actually been quite successful after all.

In all seriousness, the bottom line is this: The carnage and destruction that we see unfolding all around us here now in “the land of the free” and the home of the NSA is very much like a report card: A report card of this false American “Christianity’s” success and a report card of the true Church’s failure. (See: American Culture as the American Church’s Report Card.)

So what about those of us who, by God’s grace alone, have been saved and have had our eyes opened to these most disturbing and challenging truths?

What about folks like me who, before their eyes were opened, themselves proudly and happily played lifelong roles in support of an America-worshiping counterfeit religion masquerading as Christianity?

The Gospel-fueled Great Commission is the means by which the true and reigning King of creation has chosen to conquer all territory temporarily claimed by His loud, proud, and ultimately impotent enemies. His people are the means by which He has chosen to advance that supernaturally glorious mission to every corner and realm of His creation. (See: Roaring into Post-America Christianity.)

So while our civilization’s foundation has cracked wide open and its walls are tumbling down, we should not be afraid. (See: The devil only holds what we leave in his hands.)

While the enemies of Light and lovers of darkness are storming, looting and pillaging the near-corpse of “proud America”, we should not be shocked.

While the mission before us may seem impossible and daunting beyond description when measured by mere human standards, we should not be cowardly, lazy or apathetic. (See: What if we are living in early Church history?)

As the fruits of our failures as the professing Christian church in America come into full bloom, we should not be surprised.

By the grace of God, we should be ashamed.

We should be convicted.

We should cast aside our pride, repudiate our roles in bringing this all about, and repent.

Then we must blaming everyone but those most to blame for this mess (us) and finally take up the one and only thing that can and will ultimately win the battle on every front in the war that for now rages across creation.

Then we will be the true Church of Jesus Christ the King in practice.

And that will change everything…all by His grace, all for His glory, and all to the eternal benefit of His people.