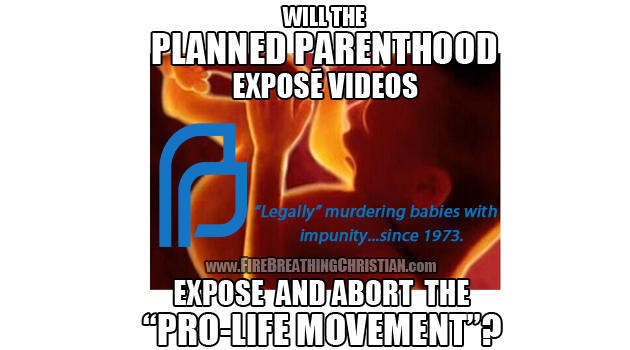 Yet, gosh golly gee, even after video after video after video “expose”, Planned Parenthood just keeps right on doing what they do. They keep right on openly, systematically murdering American baby boys and girls by the boatload. (See: Just in case you still think Republicans are ever going to actually stop abortion…)

Well, for many reasons, among them being the fact that these videos are less of an “expose” than we might have initially been emotionally led to believe.

Did we ever not know that babies were being murdered and dismembered by Planned Parenthood?

Did we ever not know that said murder/dismemberment was a brutal, ugly business?

Did any sane, thinking person honestly believe back in 2014 or 2013 or 2000 or 1990 or 1980 that little baby boys and girls weren’t being systematically murdered and dismembered in the Planned Parenthood “clinics” operating openly and with full “legal” protection all across the fruited plain?

So what has been “exposed” here, really?

Our self-delusion and rank hypocrisy, that’s what.

Our self-serving, culture-wrecking, baby-sacrificing lawlessness, that’s what. (See: Presuppositional Law: Where we begin with law determines where we end.)

And by “our” I do mean our – the professing church’s – rank hypocrisy and raging self-centered self-delusion.

The greatest expose accomplished here has been of the American professing Christian church’s utter disinterest in His Gospel-fueled Great Commission…even at the expense of a million or so (who can keep track, really?) babies a year here in the “land of the free” and the home of the self-described “brave”.

Could God be telling us something?

Could He be giving us waves of excruciating, undeniable clarity before…what comes next…

Could He be giving us one last chance to repent with all excuse, veneer, mirage, and illusion stripped away? (See: Want to end abortion, corruption, and the Big Gay Wave? Start killing sacred cows.)

Think of it this way:

Do we really think that God does not notice this?

Do we really think that He doesn’t see the blood of millions of American babies freely offered up and sacrificed on the altars of convenience and profit? (See: Cultures of death die. America is a culture of death. You do the math.)

Do we really think that He doesn’t hear their blood crying out for justice?

Do we honestly believe that He will tolerate We the People’s murderous narcissism and “legalized” lawlessness?

God is not mocked, for whatever one sows, that will he also reap.

May we repent, believe, and submit to Christ as King in practice…while we are still graced by Him with the time to do so…