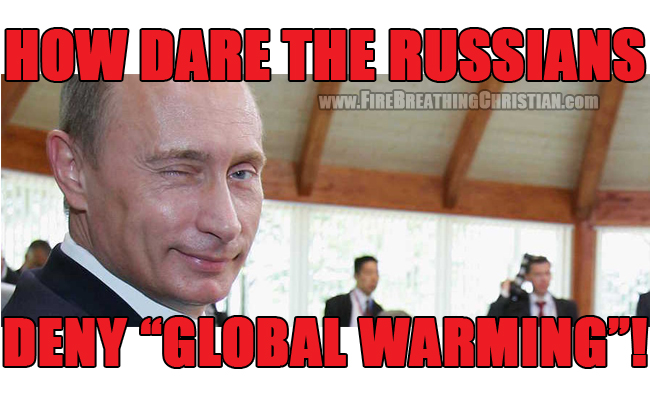 As if the Russian attempt to champion the God-ordained family model in resistance to the America-advanced perversion of the same wasn’t bad enough… (See: America Goes Gay While Russia Celebrates #RealFamily.)

As if the Russians openly campaigning against abortion and moving towards making it illegal in their land wasn’t bad enough… (See: Selling murdered baby parts in America? Sure. Why not?)

As if the Russians completely screwing up the modern American dispensational/Rapture-focused “end times” model that has been so incredibly helpful to the American State in distracting and neutralizing the professing Christian church in America wasn’t bad enough… (See: Is Putin killing ISIS and Nicolae Carpathia at the same time?)

On top of all of this flagrantly, unforgivably, and, of course, “provocatively” un-American activity, the Russians have dared to take yet another step away from the path charted by the Pagan Political Right and Pagan Political Left directed Pagan American Empire.

Those backwards, ignorant, dangerous, and alarmingly uncompliant Russians have dared to question…and even deny(!)… the American State- and Statist-empowering myth of man-made “climate change”.

As “reported” last week by an unamused and deeply concerned tool of Statist propaganda, The New York Times:

“. . . Russia’s official view appears to have changed little since 2003, when Putin told an international climate conference that warmer temperatures would mean Russians “spend less on fur coats” while “agricultural specialists say our grain production will increase, and thank God for that”.

The president believes that “there is no global warming, that this is a fraud to restrain the industrial development of several countries including Russia,” says Stanislav Belkovsky, a political analyst and critic of Putin. “That is why this subject is not topical for the majority of the Russian mass media and society in general.”

And with Russian media focused on the economic squeeze at home and events in Ukraine and Syria abroad, the absence of a robust media conversation on climate change means his skepticism goes largely unchallenged.”

This is the Russia that we are being poked and prodded as “good patriotic Americans” to vilify, hate, and anxiously hope to engage in war anywhere necessary to teach ’em a lesson and save the world from…what exactly?

Something to keep in mind and think about as we are once again being purposefully led toward at least a proxy war with Russia in Syria…  (See: Problem>Reaction>Solution – Why we will beg to have our freedoms taken away and go to war forever.)