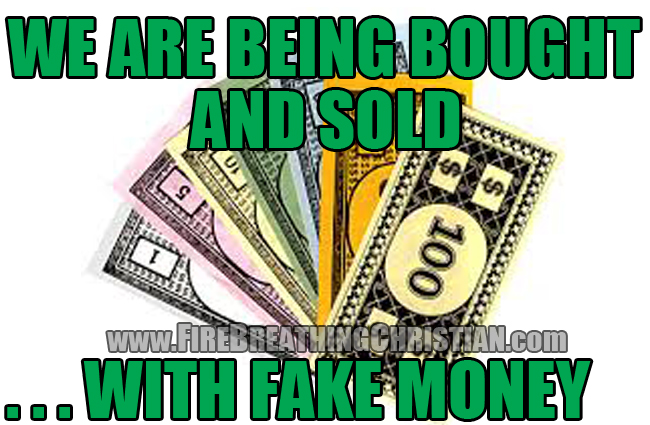 Few things are as thoroughly fictional as professional wrestling, the presidential-level political system in America, and the satanic “money out of thin” air economic system that keeps ’em both afloat.

Along those lines, if you’re honestly wondering what a sure sign of a real, serious, meaningfully and positively impactful (in a biblical way) presidential candidate would look like, please consider the following: Anyone making plain that the current system of black magic fiat economics must go – that it cannot be tweaked, fixed or saved; that it must be utterly repudiated and repented of – because it is designed to increasingly enslave the masses to the few, that is a legitimate candidate with real biblical promise.

Until you see a candidate saying something very close to that sort of thing about our economic condition (which serves as a taproot supplying all manner of rot, evil, and cultural decay), you can rest assured that they are devoted disciples of the very black magic, mass-enslaving system in question.

Speaking of black magic economics and the consequences of allowing its disciples to lead us, we come to today’s most recent market plunge. Which itself comes on the heels of last week’s market plunge, and which we tried to use as an opportunity to help people understand what is happening and why in The fiction of U.S. “free markets” and why they can’t last in God’s creation.

With this week’s market downturn even more pronounced than last week’s (as of this writing), it seems like we’ve been given yet another good opportunity to consider how these artificially induced market gyrations fit into the grand scheme – and I do mean scheme – of things.

In one particularly helpful article posted earlier today, The Telegraph chronicled the take of one “monetary theorist” (whatever that is) as to what is going on in the markets right now and where we will likely go from here:

The global financial system has become dangerously unstable and faces an avalanche of bankruptcies that will test social and political stability, a leading monetary theorist has warned.

“The situation is worse than it was in 2007. Our macroeconomic ammunition to fight downturns is essentially all used up,” said William White, the Swiss-based chairman of the OECD’s review committee and former chief economist of the Bank for International Settlements (BIS).

After 7+ years of “the professionals” managing this particular financial crisis, after over 40 years of dollar printing de-pegged from and unrestrained by any objective standard of value, and after 100+ years of organized Bankster control of our economies (and thereby our lives), we are left with what, exactly?

Well, for one, a global economic construct that is “dangerously unstable”.

And, for two, “an avalanche of bankruptcies” is right around the corner.

And way to go, Christians, for compliantly rolling over and begging to be economic slaves alongside everyone else rather than pursuing or modeling a biblical approach to economics and business.

“Debts have continued to build up over the last eight years and they have reached such levels in every part of the world that they have become a potent cause for mischief,” he said.

“It will become obvious in the next recession that many of these debts will never be serviced or repaid, and this will be uncomfortable for a lot of people who think they own assets that are worth something,” he told The Telegraph on the eve of the World Economic Forum in Davos.

“The only question is whether we are able to look reality in the eye and face what is coming in an orderly fashion, or whether it will be disorderly. Debt jubilees have been going on for 5,000 years, as far back as the Sumerians.”

The next task awaiting the global authorities is how to manage debt write-offs – and therefore a massive reordering of winners and losers in society – without setting off a political storm.

Ah, how to “manage debt write-offs”…

We’ve been ’round this track again.

They will enjoy the benefits of things like artificially propped up stock and home prices.

They will be “protected” from the consequences of bad behavior and investments.

They will be relentlessly bailed out when all else fails to ensure the lifestyle to which they believe themselves to be entitled at our ever-increasing expense.

But before we go and get all uppity at the evil Banksters and grab our pitchforks on the way to the local Citicorp, we dare not let it slide by that we as Christians are most responsible for allowing this to ever happen to our culture. We are more responsible than even the Banksters and their wholly owned legions of Progressive “leaders” and “experts” for the fiat-fueled slavery and bondage now dominating so many and defining so much here in “the land of the free” and the home of the self-described “brave”.

The situation is bleak.

Which makes the opportunity for repentance and restoration so incredible…but that incredible opportunity can only be seized when we finally, fully repent, believe, and submit to Christ as King in the realms of business and economics.