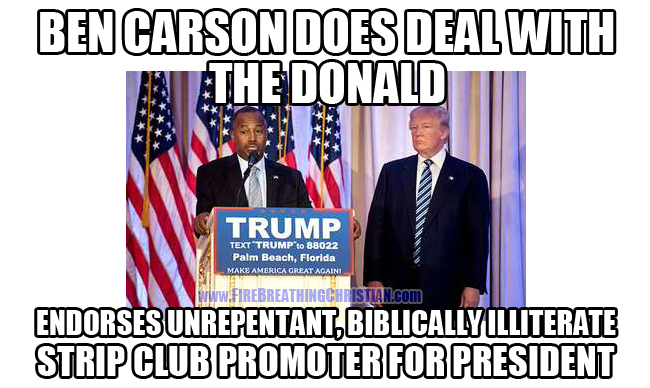 Another highly regarded “Christian leader” – this time one o’ the tip top faves of the super-duper-Christian-ish (and thoroughly paganized) Political Right – has “come out” as the latest in a long line of pragmatically pagan-minded politicos to endorse an unrepentant, biblically illiterate casino and strip club promoter for President.

But how can this be? How can a super Christian-ish candidate like Ben Carson do such a thing?

To even ask such a question is to demonstrate either a profound ignorance or determined denial of reality, since just a few months ago Ben Carson, Ted Cruz, and all of the “less Christian-ish” wannabe Presidents on the GOP debate stage pledged to support whomever won the GOP nomination…and they all knew full well that The Donald was in the race for that crown, since he has literally been front and center in each and every Republican primary season debate.

Earlier this month in How’s that GOP loyalty pledge looking now, Mr. Cruz/Bush/Rubio/Carson?, we tried to shed more light on the path that Dr. Carson has now taken (and is advising us to follow):

So here we are, one Carson down and one Cruz to go… (see: Would Ted Cruz endorse Donald Trump for President? We may soon find out.)

God is gracing us with some amazing clarity here.

Unwanted, avoided, and often hated clarity, to be sure, but clarity nonetheless.