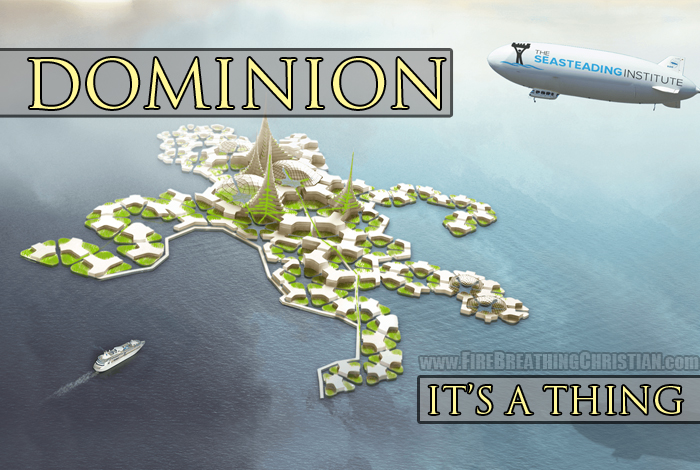 In articles like How God’s Gift Of Technology Is Forcing Us To Think And Grow Biblically and Technology, Family, and the Awesome Opportunity for Decentralization, we’ve tried to remind Christians of the beautiful truth that God owns everything and that He’s using it all to build His Kingdom in His creation on His schedule through His people by His grace in accordance with His Great Commission. This is what you might call a drumbeat theme here at Fire Breathing Christian, and we love it!

And what’s not to love about it, right?

Land, sea, stars, air, space, time, circuits, robots, farms, arts, sciences…they all belong to King Jesus and He has chosen to involve us – His people – in the process of reconciling and enjoying all of these things for His glory and to our benefit.

So things like technology ought to be on our radar, and not just a little bit. As Christians, we ought to be leading the way in both developing and appreciating God’s gift of technology.

It’s in this spirit that we’ve recently written a bit about flying cars (and a little bit more about flying taxis) with an emphasis on how wonderfully empowering these sorts of technologies will be as the Kingdom of God continues to rise and go about the business of breaking the top-down control of various old-school pagan/paganized empires who are all about the centralization of power in the hands of a few (like the falling American empire’s DC-centered approach to satanic Statism, for example).

Along these lines we couldn’t help but be jazzed about a gem of an article posted last week describing how it may soon be possible to build civilizations and cultures right here on earth apart from (many, if not all of) the crushing controls of centralized powers like those headquartered in Washington DC. Here’s a portion of the article:

Oakland nonprofit the Seasteading Institute, a group devoted to the development of floating colonies adrift from the oppressive moorings of society, has announced its dreams are closer than ever to reality. As soon as 2017, the institute hopes to break ground — er, ocean? — on its first seastead off the coast of French Polynesia in the South Pacific, Business Insider writes . . .

One motto from the Seasteading Institute, “Stop Arguing. Start Seasteading,” hints at its goals, which extend far beyond the technological — what if we built floating cities? — to the ideological — people can’t get along on land, so what about building those floating cities, huh? What about that? No, seasteading isn’t just an endeavor to get away from society, Hencken explains. It’s an endeavor to build it anew. “If somebody wants isolation, they can go buy a sailboat right now and be out at sea for months at a time,” Hencken tells Business Insider. To be separate from society, “Go be a hermit,” he says. Instead, “Seasteading is for people who want to engage in the marketplace of ideas, the marketplace of commerce, and the marketplace of government.”

Those are people like Paypal co-founding billionaire Peter Thiel, a noted libertarian whose dissatisfaction with American government lead him to support Donald Trump and whose fearsome love for free speech brought him to secretly fund lawsuits against a media company in order to protect it. In 2008, Thiel co-founded the Seasteading Institute along with Patri Friedman, a grandson of famed libertarian Nobel Prize-winner Milton Friedman, who in 2011 called his Seasteading dream “Burning Man meets Silicon Valley meets the water.” Actually, that sounds a lot more like Ephemerisle, but I digress.

Executive director Hencken says the plan in French Polynesia will cost $30 million to execute and that the floating city would consist of two or three platforms, each home to 30 people and roughly half a football field in size. “Our sustainable modular platforms are designed by the Dutch engineering firm Blue21, who showcased their engineering ingenuity with the famed Floating Pavilion in Rotterdam,” Joe Quirk, co-author with Patri Friedman of the forthcoming book Seasteading: How Ocean Cities Will Change the World, said via the press release.

Considering the differences between his current subsistence as a landlubber and his future home on a seastead, Hencken explained that “The difference would be, I would probably start my day going kitesurfing,” before sagely adding that he is likely to eat more fish. “All the land is claimed,” Hencken explains, “the ocean is our last place on Earth.” Ummm, excuse me Mr. Hencken. Haven’t you considered colonizing mars along with OTHER Paypal mafia member Elon Musk? Puny earthling!

Are there a whole lotta anti-Christian minds and worldviews involved in the creating of these technologies and the cities on the sea that they will make possible?

Are there a whole lotta bad motives sprinkled around the Seasteading movement (and pagan/paganized libertarianism in general)?

Just as there are with any endeavor undertaken or promoted by unrepentant, self-centered people.

But is this wave of technology not a beautifully inspiring thing?

What a force for decentralization!

What an encouraging development!

Okay, yeah, I am shouting, but c’mon; this…is…awesome!

Look at what God is doing, and through the likes of Peter Thiel, no less!

Put down your Hal Lindsey book, stop holing up in your prayer closet waiting for the rapture, and start paying attention!

Stop looking for Donald Trump to “Make America Great Again” and start looking at what God is doing to equip His people to advance His Kingdom right here on His earth even as the fleeting, farcical man-made empires around us teeter, crumble, and fall all around us.

Between readily available (and still rapidly advancing) present-day technologies like PCs and the Internet, and rapidly emerging technologies like robotics and 3D printing, the coming decades hold incredible promise for breaking the chains that we’ve allowed to be forged around us.

Because God is raising up not only a people, but the technologies that will equip His people to advance His Kindgom over even the most seemingly invincible cold, dead, anti-Christian systems (temporarily) dominating the scene.

The true City on a Hill – the Kingdom of God – inspires all manner of Christ-centered dominion over every aspect of His creation…including, apparently, cities on the sea.

So get with the program, Christian.

Stop fearing the loss of idols.

Start believing in the King.

Start believing in His Great Commission.

Start believing in the victory that He has secured for His people and a Kingdom that is destined to conquer everything.