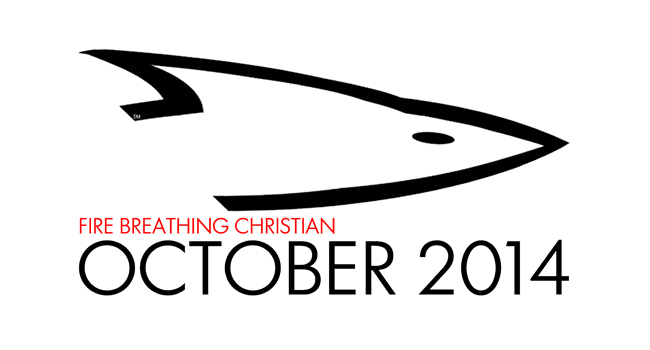 That said, here’s the rundown of articles posted in the third month (and first Reformation Day!) of Fire Breathing Christian – October of 2014:

Too big to fail and too big to jail. (October 1)

Faith, Courage, and Hope in the Face of Ebola (October 1)

Ebola? Don’t worry. The “trained professionals” have it, like, totally under control, and stuff. (October 2)

What do the Gospel and Great Commission have to do with Ebola? (October 3)

Preparing for Ebola with Confidence and Hope (October 3)

Enterprise, Falcon, or Galactica? What will Christians use to explore the restored cosmos? (October 4)

Daddy (Isn’t There) Issues: The Myth of Autonomy (October 4)

America’s lesson to creation: Pride, freedom and liberty are stupid, destructive, and gay…when centered on anything but God. (October 6)

Why does God despise the US dollar? Here are seven reasons… (October 7)

What do we actually know about Ebola and why does it matter? (October 7)

The Obacalypse continues…but are we any closer to repentance? (October 8)

Judgment begins with the Church…not the Democrats. (October 9)

Ever wonder why Pharaoh’s charioteers went along with his plan? Ever wonder if we are like them? (October 9)

Want relief from the stress, fear, and anxiety of Ebola, ISIS, and Obama? Focus on Christ the King. (October 10)

Are we all Socialists now? (October 10)

Christianity in a Box: Containing the Contagion of Obedience to Christ (October 10)

What if a “Religion of Peace” activist decapitated a “Gay Rights” activist (or two) in America? (October 11)

Will we repent or will we be destroyed? (October 13)

Of course Ebola is airborne. It flies in from Africa all the time. (October 13)

What do Barack Obama and Joel Osteen have in common…with George W. Bush? (October 14)

The Eternal Model for Marriage is Christ the King and His Bride, the Church. (October 14)

Fear not, stock-holders! The Monopoly money printing presses are here to save you (and bury the rest of us)…again. (October 17)

Hi, my name is Ron, I’m a political lawyer and I will be your Ebola Czar for this pandemic. (October 17)

Why do most professing Christians dismiss God’s Word on children’s education? (October 18)

What does Jesus bring to politics, education, law, and economics? (October 20)

Liars, Thieves, and the “Free Market” Fiction of “Too Big to Fail” America (October 22)

New York City, Ebola, and the Insanity of Our Anti-Quarantine Policy (October 23)

Ebola is an STD? So what? We have ObamaCare! (October 24)

How has the professing church in America taught Dolly Parton to hate the Word of God? (October 25)

The Satanic approach to children’s education…as embraced by most professing Christians in America. (October 25)

Does the Gospel teach us to oppose or embrace the Law of God? (October 27)

The cool new Christ-less Christianity is getting old fast. (October 28)

What do we naturally hate most about God? (October 29)

Why are we surprised that “educated” Americans are open to murdering toddlers and infants? (October 29)

On October 31, are we walking dead or are we supernatural reformers? (October 31)