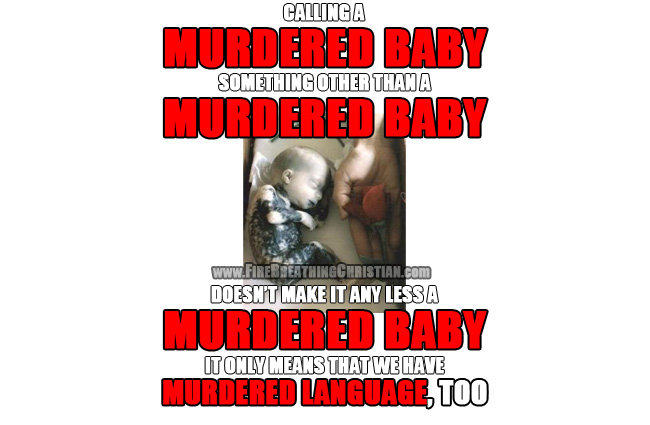 In America, we claim a lot of things, usually in a loud and proud fashion. That’s just how we roll (and have been encouraged to roll by the State/Corporate-owned schools and pop-culture under which we’ve been discipled).

As a natural and purposeful consequence of our Pagan discipleship, we proudly claim the “right” to do any number of things.

All while the vast majority of us claim to be Christians, of course.

This is why everything is up for grabs.

This is why everything is changing.

This is why words like family, marriage, love, law, justice, liberty, and even life itself have come to mean nothing solid. They have been purposefully pummeled and pounded into an ever-malleable condition to be used by those who would rule us in any manner that they see fit at any given moment in time.

So as we look around in horror at the wave after wave of catastrophic change that is now sweeping over the culture, the last thing we ought to be is surprised. This was always where man-centered, “We the People”-centered approaches to law, liberty, and life were going to lead. They never could have gone anywhere else. Oh sure, they could have gotten here a little quicker or a little slower or with some slightly different (more “conservative” or more “liberal”) flavoring along the way, but the endgame and end goal was and is always going to be the same any time a people chooses to build its culture and civilization apart from explicit connection and subjugation to Christ as King in practice.

When our forefathers – many of whom were wonderful and gifted by God in many unique and amazing ways – decided to enshrine “rights” to do that which God has explicitly forbidden, that open rebellion against Christ as King in practice set us firmly on the path that leads to…well…just look around.

We are now a nation loaded with professing “conservative Christians” who actually believe and openly live out a flagrantly Socialist/Statist worldview. (See: How American Conservatives happily forge the chains of American Socialism.)

We are now in a “land of the free” and home of “the brave” where the American State is openly known to spy and manipulate its citizens on a scale and at a depth that would make leaders of the Gestapo and KGB of old weep with envy. (See: Privacy is for masters. Transparency is for slaves. Welcome to “the land of the free” and the home of the NSA.)

We are now a people who are “free” to “marry” another of the same sex…and will soon be “free” to marry as many other partners as we like. (See: “Supreme Court” Votes for Wrath of God Upon America.)

Do you see what we’ve systematically done here?

To language, I mean?

All along the way, critical terms have been turned upside-down, beginning with our All-American and thoroughly unbiblical redefinitions of freedom and liberty, which were themselves terminally and purposefully perverted through our refusal to submit them to the lordship of Christ.

This is how we got to where we are…and the much worse that is right around the corner.

“We the People” will not acknowledge that Christ owns, defines, and personally embodies these terms.

“We the People” will not submit to the unbreakable truth that He is the necessary sustainer of these terms. (See: Who owns America? (Hint: Not “We the People”.)

Why do we do this in “Christian” America?

Because “We the People” will not have Christ to rule over us in practice.

We are proud, unrepentant, and willing to do anything to sustain or justify our rebellion, including murdering language, babies, and anything else that gets in our way.

So take a good look again at the price – the inevitable product – of our All-American approach to freedom, liberty, law, and life in practice apart from subjugation to Christ the King: 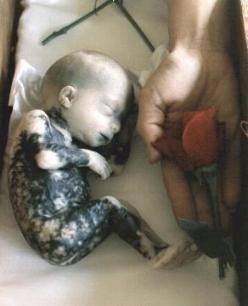 Look at that baby – that 22 week old baby girl who was burned to death in accordance with the “right” to murder  children for any reason or no reason at all. (See: 51,000,003 reasons why America owes Nazi Germany an apology.)

It is very important that we look long and hard at the charred corpse of this precious little baby girl.

It is very important that we understand how refusing her the label of “baby” was integral to her being burned to death in this “legally” protected way.

It is even more important to realize that we were only able to embrace the redefinition of such critical terms as “child”, “marriage”, and “family” because we first redefined the object, and thereby the meaning, of the term Lord.

“We the People” have attempted to make ourselves God in practice. It isn’t really working out so well, as it never does anywhere in God’s creation, but that hasn’t stopped us. Even now we seem far more inclined to double down in All-American pride than we are toward repentance and submission to Christ as King. (See: Will America repent or will America be destroyed?)

The eventual death of every meaningful concept is the inevitable consequence of our rebellion. Until we repent, believe, and submit to Christ as King in practice, it will only get worse – much worse – from here. (See: Presuppositional Law: Where we begin with law determines where we end.)

If we really want to save America, we will repent and lead others to do the same, all by God’s grace, all for His glory, and all to our eternal benefit.

If we really want to save babies, we will first have to save our minds and language from the stain and perversion of our sinfulness.

If we really want to save language and finally begin to apply it in a life-giving, Christ-honoring way, we will begin with our pursuit, understanding, and application of the word Lord.