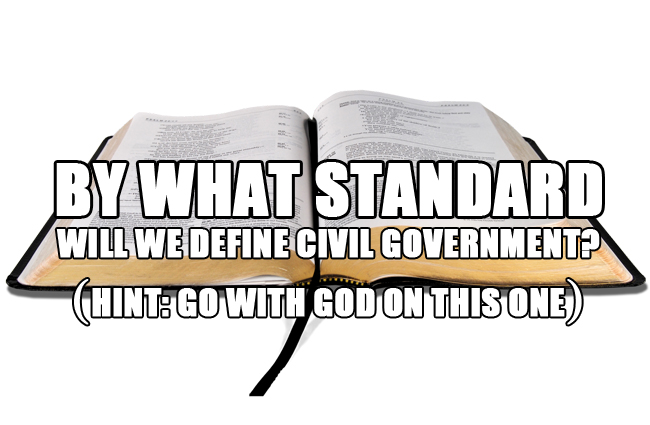 More specifically, what is civil government?

Put another way, what is The State?

What are its roles, responsibilities, and limitations?

Where might we as Christians go to find the answers to these important questions…hrmmm….I wonder…

Well, howsabout other respected American State loving “experts” and “leaders”, then? Surely they have all the answers, right? Surely they have a solid foundation of truth upon which we can build our understanding of the roles, responsibilities, and limitations of the state?

While we’ve been conditioned for generations now through State-run “education” and State/Corporate-owned pop culture to view The State as the authority on The State, what we’ve been told – what we’ve had hammered and engrained into our minds from toddlerhood on – is completely (and purposefully) wrong. What we’ve been relentlessly pitched and sold by The State as the truth about the nature of The State is, not surprisingly, a flagrantly deceptive and incredibly destructive State-serving lie. (See: Statism 101: State-run “education” makes a State-dependent population.)

As we covered in July, our approach to things like law, government, politics, and the role of the state is fundamentally formed by the presuppositions that we bring into our thought processes from the very beginning:

“What we often automatically and unconsciously presuppose about the origin and nature of law determines what we will allow ourselves to see and consider from that point forward. Our presuppositions about the essence of law dictate which “truths” we will acknowledge as legitimate and which “realities” we will allow on our radar.

Law, as with all other things in the created universe, can only begin to be rightly understood by going to the beginning.”

What is true of law is certainly true of civil government, politics, education, and everything else.

So it is then that in order to get those vital answers to the important questions asked above, we must go to the beginning:

Civil government, like law, is not a creation or invention of man, however much we may like to imagine (and are encouraged to imagine) otherwise. Therefore, civil government is not something that man can tweak or modify as he sees fit apart from the Nature of God as revealed in His Word.

Civil Government belongs to God. It is a reflection of Him in His creation. It is born from, bound to, defined by and dependent upon His Nature. (See: What does Jesus bring to politics, education, law, and economics?)

Only with this simple but profound and essential truth in hand and held tight are we are able to rightly understand and apply civil government in God’s creation.

But we aren’t really encouraged to think of civil government or The State in this way, are we?

Every unbelieving “expert” and “leader” in the land  – be they of a Pagan Political Right or Pagan Political Left flavor – is all about promoting and reinforcing the notion that state or civil government is man’s and that any consideration of such government here “in the real world” must begin with the assumption – the presupposition – that man is somehow, some way legitimately empowered and entitled to determine for himself what is right and what is wrong in the realm of civil government. (See: How’s that Pagan “conservatism” workin’ out for ya, Christian?)

This Christless lie is the foundation of Statism…including our All-American version. (See: What would happen if Christians just said no to American Statism?)

All Statism is founded and built upon the satanic presupposition that civil government belongs to man and is somehow not under the lordship of Christ and therefore not subject to obey Him.

This is, of course, utterly incompatible with a Christian worldview.

Christians are commanded and equipped by the grace and Spirit of God to take every thought captive to Christ (2 Corinthians 10:5) and to both become and propagate disciples of Christ who actively obey all that He has lovingly commanded regarding every realm of His creation (see: Matthew 28:18-20)…which includes His creation of civil government.

When we presuppose that civil government is man’s plaything, we get…well…pretty much what we have now in America, and the much worse that will follow apart from broken repentance and humble submission to Christ as King over even our beloved American State. (See: Will America repent or will America be destroyed?)

When we presuppose that law and civil government are man’s to do with as he sees fit, we predictably end up with things like the suicidal insanity of “gay marriage” and the open, systematic mass murder of baby boys and girls for the sake of convenience in the name of “liberty” and “freedom”. (See: “Supreme Court” Votes for Wrath of God Upon America and Note to ‘Merica: There is no “God-given right” to murder children. Repent accordingly.)

This is what the state and civil government become when we imagine them to be anything other than wholly reliant upon the Nature of God as revealed in His Word.

This is the lesson of America’s exaltation of itself as God in practice…a lesson that Christians are well served to note and apply as we move forward through this temporary man-centered, man-made wreckage and toward the supernatural victories and restoration to come, all by God’s grace, all for His glory, and all to the eternal benefit of His people. (See: Roaring into Post-America Christianity.)