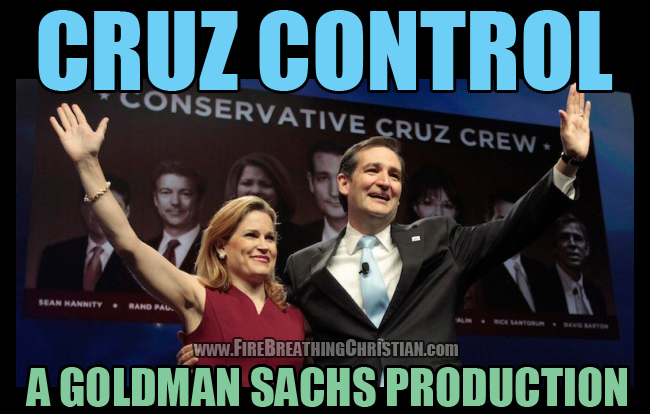 When Ted Cruz wins the Republican Party nomination for President of the United States, let’s remember that despite the fact that he may well be a super nice guy and that his father is an impressive man in many substantial ways, Mr. Cruz is, at the end of the day, a classic American Statist deeply committed to fundamentally unbiblical approaches to law, economics, war, liberty, freedom, privacy, and civil government in general. (See: How’s that Pagan “conservatism” workin’ out for ya, Christian?)

Moreover, he’s a classic American Statist who just “happens” to be married to one of the highest ranking folks at Goldman Sachs, which is another way of saying that he’s married to a woman who operates at the highest levels of the Matrix–like System of systems built upon the black magic fiction of fiat economics. To understand what this means at a basic level, please read Fiat $lavery: We have been bought and paid for…with nothing.

So if you think that President Cruz represents a legit path to anything seriously resembling biblically based solutions for the smoldering wreckage that is America, think again. He’s just – at this moment anyway – another American Statist dressed in paganized conservative garb with enough Christian rhetoric sprinkled ’round the edges to dupe masses of American evangelicals prone to proudly swig down and regurgitate everything from Heaven is for Real to whatever Blood Mooning episode the likes of John Hagee decides to parade out and profit from next. (See: The Blood Mooning of American “Christianity”.)

Barring a supernatural combo of conviction, repentance, and the radical reformation of his views at a fundamental level (something God most certainly can accomplish in Mr. Cruz or anyone else and something that we should certainly be praying for where Mr. and Mrs. Cruz are concerned), there can be little hope for much true and lasting good to come of a Cruz presidency. On the other hand, there should be every expectation that under President Cruz’s watch civil government in the United States will continue to grow in size and power as the actual freedoms, liberties, and privacy of the masses continues to shrink…just as they’ve been doing for many generations now under the watch of any number of “conservative leaders”.

So what’s a politically aware and active Christian to do then?!

What’s a thoughtful, serious Christian man or woman to cling to for hope if the most “conservative Christian” of options being offered up by the Pagan Political Right wing of The American Political Puppet Show isn’t actually going to lead us anywhere but deeper into proud idolatry of America itself while growing the very systems that “leaders” like Cruz repeatedly rail about in carefully prepared political speeches?

Well, howsabout this: Let’s simply trust in Christ the reigning King of creation and do what He has commanded and equipped us to do, regardless of whatever happens during this season’s run of The American Political Puppet Show.

Let’s stop getting all wrapped up in the controlled, contrived political game that is a Corporate owned and operated fiction. Let’s stop hanging on every word spouting from the right head or left head of the American Statist dragon that is killing us and finally, fully grasp the glaring truth that the Pagan Political Right and Pagan Political Left are, in fact, two heads of the same dragon.

Last month in Cruz Control: How Ted Cruz is positioned to win the GOP nomination…and why Christians shouldn’t pin their hopes on it., we tried to remind both ourselves and readers of the need for Christians to avoid the many powerful, destructive distractions of The American Political Puppet Show, keep our politics completely rooted in Scripture, and do the things that our King has placed us here to do:

As the last GOP presidential nominee wannabe debate of the year gets underway this evening and we’re subsequently inundated with post-game reports and opinions and prognostications from all manner of Pagan and paganized “experts”, let’s remember that The American Political Puppet Show, while funny and sad and tragic and even exciting at times, is still ultimately just a puppet show.

And as this controlled, contrived game runs its course, the real King of all creation (yes, including America) is on His throne. He commands everyone (yes, including everyone in America) to repent and submit to His rule in every area of life (yes, including law, economics, education, and civil government), and He has ordained that His people by His grace with His Spirit in accordance with His Word will make obedient disciples through the power of His Gospel-fueled Great Commission. (See: “…on earth as it is in heaven.”)

So we have work to do. (See: Man up, buttercup. Rome wasn’t conquered in a day.)

By His grace, for His glory, and to our eternal (and often temporal) benefit.

So let’s get to it…regardless of what any Goldman Sachs sponsored puppet may have to say tonight, tomorrow, or any day thereafter.