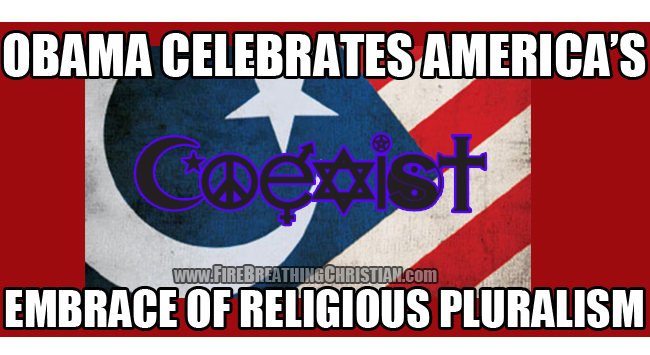 Every time Barack Obama (or Donald Trump or Ted Cruz or Marco Rubio) advocates the satanic concept of religious pluralism, almost always while claiming to be a Christian, “We the People” are reaping what we’ve sown.

For generation after generation, we’ve championed as a virtue that which God despises so much that He singles it out for explicit condemnation and repudiation in the earliest of the Ten Commandments…you know, those things written on plaques, monuments, and posters that American “conservative Christians” want sprinkled all around government buildings like lucky rabbits feet, but are oh-so rarely read, much less obeyed, by the very same “conservative Christians”.

Back in May of last year, we tackled this most enormous of elephants in the room in Note to ‘Merica: There is no “God-given right” to worship false gods. Repent accordingly, which included the following convicting (and therefore not very popular) tidbits of info:

This may be news to most American “Christians”. . . , but, believe it or not: There is no “God-given right” to openly worship false gods.

It is in this context that we ought to consider US President Barack Obama’s comments centering on the All-American “virtue” of religious pluralism as he made them recently while visiting a Baltimore area mosque. In Obama rebuts anti-Muslim rhetoric in first U.S. mosque visit, CNN reported on Obama’s pitch perfect appeal to the All-American (and satanically inspired) concept of religious pluralism as the basis upon which we must continue to operate:

Attempting to recast what he said was a warped image of Islam while encouraging members of the faith to speak out against terror, Obama described Muslims as essential to the fabric of America.

“Let me say as clearly as I can as president of the United States: you fit right here,” Obama told the audience at the Islamic Society of Baltimore, a 47-year-old mosque with thousands of attendees. . .

“We can’t be bystanders to bigotry,” Obama said. “Together, we’ve got to show that America truly protects all faiths. As we protect our country from terrorism, we should not reinforce the ideas and the rhetoric of the terrorists themselves.”

In this, Obama accomplishes two things, but before we get into those things, we are well served to note that his very American Statist view of religious pluralism – that being that all lesser gods and religions are to be treated equally as subjects under the one true religion of Statism and the one true god of the State – is a view explicitly proclaimed and applied by each and every so-called “conservative Christian” seeking the Republican Party nomination for President.

Let that soak in deeply before continuing.

The Pagan Political Right and Pagan Political Left are two wings of the same Statist/Anti-Christian dragon that is dragging our culture into darkness and bondage before our eyes.

With that understood, here are two points neatly made in the above quote from President Obama:

Just ask yourself: How many times have you heard professing Christians say something like, “But we can’t seek our God’s Word as the basis for law in America! That would make us just like ISIS!”

The insanity and inanity of this is almost beyond description, yet fits right in with where we are now in America and helps a great deal in explaining how we got here.

The fact that most professing Christians in the land can’t even grasp, much less apply, the fundamental difference between a false god and the one true God when it comes to understanding and pursuing law and civil government in God’s creation tells us all we need to know about American “Christianity” in 2016.

And howsabout this glaring-yet-never-asked question: Why is there even an openly operating mosque in Baltimore for President Obama to visit and use in such a manner in the first place?

Well, do you wanna know?

Do you really want to know why Satanists, Muslims, and witches now operate freely and are “legally” protected by the American State as they practice that which God despises and has made plain that He will wipe from the face of His earth?

For the same reason there are openly operating mass baby-butchering facilities being “legally” protected and enabled to kill on a scale that would make ISIS (or NAZI Germany) weep with envy each and every day all across “the land of the free” and home of the self-described “brave”.

Why are witches and Satanists allowed to openly worship their gods in America?

It all begins and is inextricably bound to our willingness – or unwillingness – to submit to the Nature of God as revealed in His Word as the basis upon which “We the People” pursue law, economics, business, and civil government right here and now in America.

We will not have Christ to rule over us…so we get what he have now instead.

God has raised up the likes of Barack Obama, George W. Bush, Bill Clinton, and every other Statist to guide our fast-fading empire as a part of His perfect judgment against a proud American people who claim Him with their lips but will not have Him to rule over them in practice.

If we will not have His Law as our law, we will have His judgment instead.

There is no third option anywhere in His creation…and neither America nor Allah get a vote.