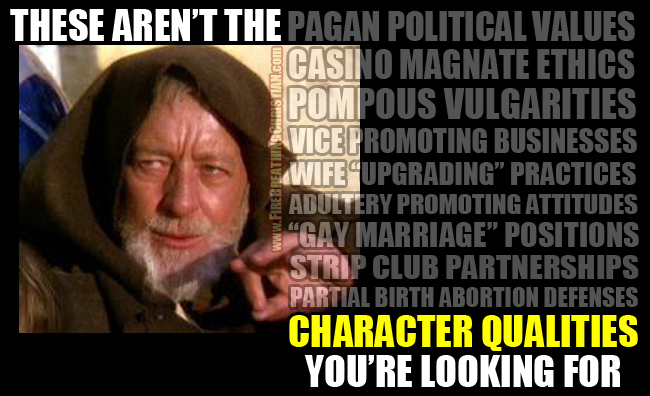 GOP front-runner (and likely sith lord) Donald Trump continued to maintain a magical, svengali-like grip on the simple, submissive minds of thousands of voting evangelicals as his dark march toward the Republican nomination rolled through Super Tuesday and on into March.

“Man, I wish I could do anything close to that,” said a still-recovering, disheveled and psychologically fragile Jeb Bush while staring down at his feet in shame. “I’d kill to have that kind of power over people. My whole family would. We’ve been trying for generations to do what this guy does so effortlessly! It’s just not natural“, added an increasingly twitchy Bush before breaking down and weeping uncontrollably.

“I mean, what the heck!” Jeb shouted between sobs as he raised his unshaven face and bloodshot, tear streaming eyes into the light, causing him to flinch just before freezing into a listless stare.

Texas Senator Ted Cruz, Trump’s most significant challenger for the party nomination, expressed similar concerns about The Donald’s freakish ability to co-opt and control the hearts, minds and votes of millions of evangelicals across America.

“I just don’t understand it at all,” said Cruz in his pitch-perfect, overly polished tone accompanied by hand animations so silky smooth that we’re all pretty sure he’s a robot.

“I’ve been a consistent champion for Christian values as defined by the Republican Party since I was created in a lab at Liberty University just over thirty years ago,” added a totally poised Cruz while trying hard to figure out how to emote and display the frustration and anger that he knew would fit so well here.

“And what did it get me?” Cruz mused as he maintained exactly the same facial expression while wishing he could instead convey something resembling righteous indignation. “Jerry Falwel, Jr. endorsing Donald Trump, that’s what! The President of the school that literally constructed me in an underground bunker just endorsed a biblically illiterate strip club promoter to be President of the United States…over me!”

Cruz concluded by observing, “I’m pretty sure this power that Trump is wielding is of the devil. It’s as though he just takes over people’s minds by repeating the same vague, hollow rhetorical platitudes. He seems to have an unnatural ability to dominate and control the weak minded. It’s kind of like demonic possession, but for dumb people.”

Marco Rubio, the Senator from Florida who has born the most brutal beatdowns from Trump in recent weeks,  also has serious reservations about the bizarre power that The Donald has displayed along his seemingly inexorable, Godzilla-like march to the White House.

“No matter how many brief, beautifully polished, multiple-focus-group-tested, perfectly Reagan-esque lines I relentlessly regurgitate in response to any question I’m asked about anything, I just can’t seem to compete with this dark power that Donald has to control the minds of the masses,” said a clearly shaken Rubio. “I’m saying exactly – and I mean exactly – what Republican voters have been programmed to want to hear, and in nice little easy-to-digest soundbite and Twitter-friendly forms, to boot. But it just isn’t working. It’s just not fair!”

Trump only seemed to be enjoying the horror and despair of his increasingly insignificant political opposition.

“Let me tell you something, when I’m President, we are going to make America great again!” added The Donald, once again with some strange, spell-caster-like finger waving action.

“You know, just by saying that out loud again my poll numbers with the evangelicals in South Carolina probably went up two points. They love me. They love me way more than Cruz, who was literally built in a lab for the purpose of appealing to them. That’s how amazing I am to the evangelicals!”

When asked at a recent press conference how it was that these American evangelicals had come to so enthusiastically throw themselves behind the mad power grab of a proud, vulgar, utterly unrepentant, biblically illiterate, strip club promoting, wife-“upgrading”, adultery boasting, politician buying, casino owning, vice peddling political whore such as himself, Trump shrugged his shoulders, rolled his eyes, and let a loud “give me a break!” fly before pulling himself together just enough to look straight into the camera and gently wave his fingers along an imaginary airborne horizontal line while calmly and clearly saying:

“Because I will make America great again!”