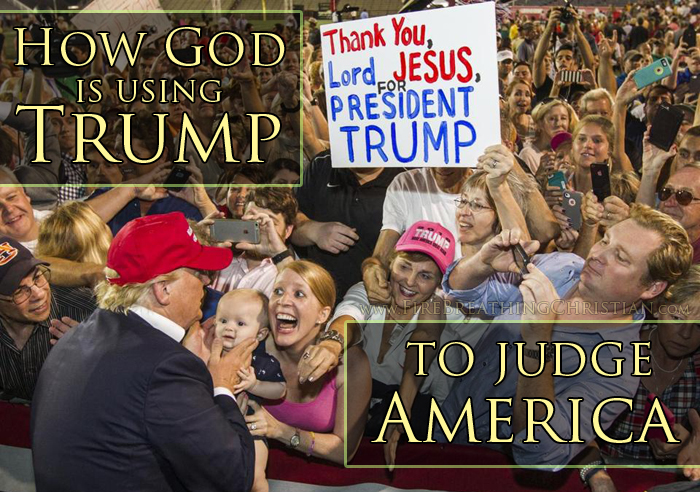 In The Donald’s ascendancy we are being graced with so much more clarity than we could ever have expected where our pride, unrepentance, and desperate condition as a people are concerned. God is indeed doing something “absolutely amazing” through Trump.

So as we wade through the wails and gnashing of teeth radiating from the Cruz camp, let’s take a moment to focus on what really matters here. Let’s stop pretending and playing along with the contrived, controlled political puppet show parading around us and let’s zero in on the brutal, ugly truths that God is even now making plain about America (and America’s version of Christianity) through His perfect, purposeful use of one Donald J. Trump.

It’s in that spirit that I respectfully offer for your consideration the following list of Seven Things God Is Using Trump To Teach America:

Psalm 2 seems like a good place to close these thoughts:

Why do the nations rage
and the peoples plot in vain?
The kings of the earth set themselves,
and the rulers take counsel together,
against the LORD and against his Anointed, saying,
“Let us burst their bonds apart
and cast away their cords from us.”
He who sits in the heavens laughs;
the Lord holds them in derision.
Then he will speak to them in his wrath,
and terrify them in his fury, saying,
“As for me, I have set my King
on Zion, my holy hill.”
I will tell of the decree:
The LORD said to me, “You are my Son;
today I have begotten you.
Ask of me, and I will make the nations your heritage,
and the ends of the earth your possession.
You shall break them with a rod of iron
and dash them in pieces like a potter’s vessel.”
Now therefore, O kings, be wise;
be warned, O rulers of the earth.
Serve the LORD with fear,
and rejoice with trembling.
Kiss the Son,
lest he be angry, and you perish in the way,
for his wrath is quickly kindled.
Blessed are all who take refuge in him.

Repent, believe, and submit to Christ as King…in practice.

(For a satirical look at these recent political turns, check out The End Times articles including Unhinged Heartland Evangelicals Propel Biblically Illiterate Strip Club Promoter To GOP Nomination and Distraught Cruz Supporters Begin To Rationalize Their Inevitable Vote For Trump.)