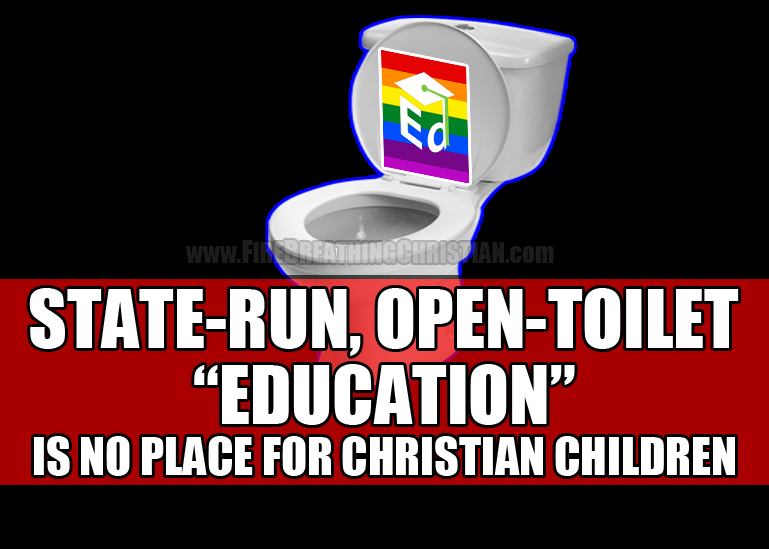 Here we are again: President Obama, serving quite effectively in his role as one of the more glaring judgments of God upon America, has decreed from the lofty heights of Washington that all American public schools are to embrace and enforce “open toilet education”.

For those of you who’ve not yet heard the glorious news from on high (that being DC, of course), as The New York Times reported today in Obama Administration to Issue Decree on Transgender Access to School Restrooms:

In the middle of a legal fight with North Carolina over transgender rights, the Obama administration is planning to issue a sweeping decree telling every public school district in the country to allow transgender students to use the bathrooms that match their gender identity.

The letter to school districts that will go out Friday describing what they should do to ensure that none of their students are discriminated against, signed by officials of the Justice Department and Department of Education, does not have the force of law. But it contains an implicit threat: Schools that do not abide by the Obama administration’s interpretation of the law could face lawsuits or a loss of federal aid.

In this we see so many important but long avoided truths made even more plain, including:

All of which leads us to the other big, ugly, flaming red flag item in the “here we go again” category: In the immediate – and I do mean immediate – aftermath of Obama’s decree, bajillions of loud, proud, angry self-described conservative Christians from all across the land began screeching and ranting about how unbelievably awful and evil all of this is…all while dutifully and compliantly shipping off their little boys and little girls to the State for an explicitly anti-Christian, open-toilet “education”.

Obviously the unfolding judgment of God upon America will (and should) only continue for as long as this is the case, so we all might as well prepare for the next decree of insanity to be ratified through the Department of Education and imposed upon the voluntarily sacrificed children of millions of professing Christians in the land until and unless repentance finally comes.

And let’s not forget to give credit where credit is due on the pastoral and “evangelical leadership” front. Without guys from Franklin Graham and Robert Jeffress right on down to the typical local little “conservative, Bible believing” church pastor enabling and encouraging the satanic children’s education movement, none of this would be happening. Not even close.

So, if you’ve never heard your pastor clearly engage the children’s education issue using Scripture from the pulpit, lovingly warning in accordance with the Gospel that shipping one’s little children off to the State-run system of satanic worldview training and “education” is indeed sinful, please do be sure to thank them for their role in bringing us to where we are now.

Official open toilet education is the fruit of their labor, or lack thereof.

Back in March, we asked What if Cruz supporters yanked their little children from State-run schools?

Going absolutely nuts over things like Target’s insane bathroom policy while continuing to freely feed our own children into the very system that promotes and advances the worldview behind such policies exposes American Christians as the unserious, incoherent, faithless and oh-so-easily-manipulated little drama-queens that we are.

Let’s hope that Obama’s formal decree of open toilet education in all American public schools will finally shake us out of our culture-wrecking cowardice and denial. Let’s hope that we will finally repent, believe, and submit to Christ as King in educational practice before we are finally fully flushed away under the presently unfolding judgment of God.