So how is our Pagan “conservatism” and America worship working out for us?

How’s that 40+ year “pro-life commitment” from the GOP panning out? (See: Note to ‘Merica: There is no “God-given right” to murder children. Repent accordingly.)

How’s that GOP/”conservative” defense of “family values” playing out? (See: Of course Jeb Bush is “fine” with the idea of “transgender” soldiers in the US military. That’s just what Pagan Right politicians do.)

How’s that Pagan “conservative” defense of marriage working out for us? (See: “Supreme Court” Votes for Wrath of God Upon America.)

How’s that Pagan “conservative” “war against the welfare state” gone for the past 50-ish years? (See: Jeb! (not Bush) Launches Presidential Campaign with “Conservative” Case for the Welfare/Warfare Nanny State.)

How have all of those Pagan “conservative” Supreme Court justices helped the cause, especially on The Big Votes (like child sacrifice/abortion and “gay marriage”), where they have been in the clear (and often huge) majority? (See: With ObamaCare and “Gay Marriage” upheld, when (if ever) should we simply say no to Federal control?)

How have all of those hours and hours and days and weeks and months and years of man-centered Pagan “conservative” talk radio helped to shape us into a better, more Christ-centered culture?

How’s all of this Pagan “conservatism” treatin’ ya?

These seem like fair – and necessary – questions to be asking right about now.

How’s the “American Dream” of even owning a home outright panning out under the guidance of our beloved Pagan “conservatives”? (See: Why home ownership will never be allowed in “the land of the free” and the home of the NSA.)

As our still-proud and still very much self-absorbed civilization crumbles under the weight of God’s wrath before our “shocked” and “horrified” eyes, these are the questions that we ought to be exploring most vigorously and passionately. Instead, we’re mostly still ignoring or dismissing ’em entirely in favor of the same old tired trinkets and “solutions” offered up by the very folks and worldviews that led us here to the gates of hell in the first place. (See: Our Suicidal Lawlessness.)

The bottom line is this: By what standard will we live?

Will we be ruled by Christ the King’s clear and detailed life- and civilization-sustaining standard as lovingly revealed in His perfect Word?

Or will we instead insist on being ruled by the man-centered, mankind-enslaving will and words of men?

Here in America, the painful answer still seems to be: Give us men! We will not have Christ to rule over us! We are “free” to govern as we see fit and we have the “right” to do any number of things that Christ forbids. (See: Note to ‘Merica: There is no “God-given right” to worship false gods. Repent accordingly.)

Even though the wheels have clearly come off our “We the People” worshipping culture in so many ways just over the past few months, most Americans (including most professing Christians in America) seem no closer to repentance and submission to Christ as King in practice. We continue to resist Him and flock to the same Pagan Political Right “experts” and “leaders” who have played pivotal roles in bringing about (and then sustaining) everything from “legal” child sacrifice (abortion) and the “legal” obliteration of privacy (NSA/TSA) to “legal” “gay marriage” and the “legal” operation of businesses dedicated to making a profit by encouraging and assisting mothers in the murder (and profitable dismemberment) of their own children. (See: Selling murdered baby parts in America? Sure. Why not?)

So what is going to be our basis for law?

What is going to be our basis for justice?

What is going to be our basis for economics?

Will “We the People” repent and submit in broken humility to Christ the King? Or will we keep on swilling the same old “We the People” bilge and propaganda that has been so masterfully used by some to lead us to where we are now? (See: Will America repent or will America be destroyed?)

Will we finally suck it up, admit that we’ve been profoundly duped and played like violins for a very long time? Or will we pridefully persist in loyalty to our preferred wing of the Pagan Dragon that is devouring our culture?

That’s the question put to us now.

That’s the stage that God has set to demonstrate the unbreakable nature of His Word throughout His creation. (See: Who owns America? (Hint: Not “We the People”.).)

By what standard will we live? (See: How to truly love (and really save) America.)

So as you watch the Trump Show roll on or you hear interviews, town halls, articles and “debates” featuring “top tier” Pagan Right and/or Pagan Left representatives, pay close attention to how they answer (or purposefully avoid) these vital questions…and treat them accordingly. 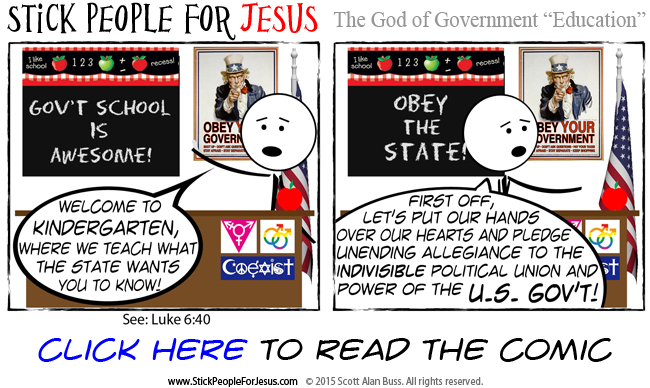