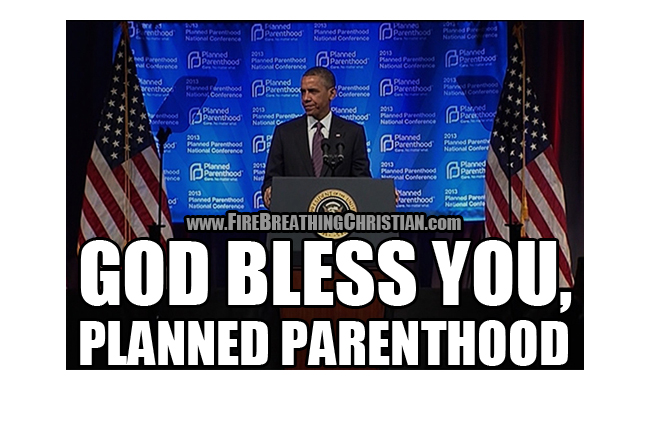 Revelation leading to repentance can be a very hard thing. That’s it’s nature.

But that doesn’t make it any less a blessing from God.

Thankfully, these days we’re getting a whole lotta revelation. Not much in the way of repentance yet, but God is graciously keeping the revelations coming anyway. (See: Will America repent or will America be destroyed?)

The latest wave of America-exposing truth has come by way of Planned Parenthood’s shouldn’t-be-at-all-surprising involvement in carefully protecting the parts of beautiful healthy little baby boys and girls while helping mothers murder these kids and then selling the preserved parts for profit. (See: Selling murdered baby parts in America? Sure. Why not?)

This all comes on the heels of America’s proud plunge deeper into overt Statism by way of its Supreme Courts decision to uphold ObamaCare and then, in case there was any doubt left lingering as to our open hatred of God’s Nature as revealed in His Word, the same court suicidally decreed the redefinition of the unalterable, God-ordained institution of marriage. (See: “Supreme Court” Votes for Wrath of God Upon America and With ObamaCare and “Gay Marriage” upheld, when (if ever) should we simply say no to Federal control?)

These things are then predictably used by the Pagan Right to paint Obama or Democrats or Leftists or whatever as the real problem. The real threat. The real enemy. The only cure for which is, of course, the Republican Party and Pagan “conservatism”. (See: Confronting the Gay Orwellian Party: Dragging the Pagan Right out of the closet and into the light.)

But what of this Pagan “conservatism”? (See: When Conservatism Trumps Christianity.)

What of our encouraged America idolatry? (See: The America Idol: How “Christians” Worship and Enable the Anti-Christ State.)

Has it not been used most effectively to convince “Christian conservatives” to embrace and proudly advocate counterfeit truths and concepts that are every bit as blasphemous as Obama’s “God bless you, Planned Parenthood” line?

Have we not been convinced and do we not proudly proclaim that we have the “God-given right” to freely speak blasphemy?

Have we not been convinced and do we not proudly proclaim that we have the “God-given right” to “legally” operate bu$ine$$e$ built for the purpose of “helping” women to sacrifice their own children on the altar of convenience? (See: Note to ‘Merica: There is no “God-given right” to murder children.)

Is this not the American way?

Then is Barack Obama not the just judgment of God upon a people who will not have Him to rule over them?

Remember: “God-given rights” are only as good – or as real – as the God giving them.

Which makes it fairly plain that the (temporarily) ruling (false) god in America is clearly the American State.

The sooner we realize that, the better.

Until we ditch the American pride, repent and submit to Christ as King in practice, we’re gonna see and feel and smell more and more of the same…more and more revelations of just how profoundly pathetic, evil, and worthy of destruction we’ve become.