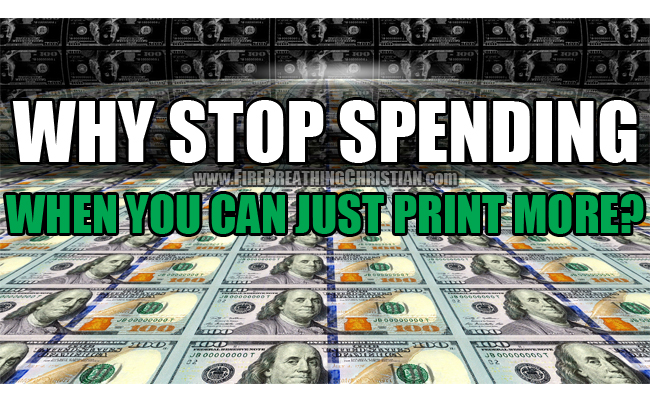 Can you feel the surge?

Do you hear the hum?

The surge of manufactured power and the hum of warming printing presses, I mean. (See also: Fear not, stock-holders! The Monopoly money printing presses are here to save you (and bury the rest of us)…again.)

This “money”-for-nothing will then be used, as always, to selectively bail out and prop up some, while purposefully driving the rest of us into more obvious forms of bondage and dependency.

So those who own things like homes and stock in favored companies will once again be well served, at least in the short term, while those who do not own such things…well…those folks will be paying even more for the rent and groceries that they already cannot usually afford.

This is what “free markets” purposefully become when some have the power to create “money” out of thin air. (See: Fiat $lavery: We have been bought and paid for…with nothing.)

This economic construct under which we live and have been conditioned to view as normal is a direct product and consequence of what Scripture calls an abomination:

A false balance is an abomination to the LORD,
but a just weight is his delight.

The biblically abominable behavior getting all the press these days, and understandably so, is the fast-moving, culture-sweeping phenomena of the sexual chaos movement.

With the US Supreme Court ruling in favor of “gay marriage”, State-run “schools” continuing to march our children down the path of conformity with an anti-Christ worldview, and Corporate-run pop-culture pressuring us at every turn to embrace the “freedom” and “courage” of “Caitlyn” Jenner & Friends, it’s easy to understand why the abomination of sexual chaos has captivated the horrified hearts of deer-in-the-headlights evangelicals across the fruited plain. (See: “Supreme Court” Votes for Wrath of God Upon America.)

Yet it is the generally unnoticed abomination of fiat currency has played a major role in empowering the gender/sexuality chaos monster to do what it’s been doing for decades and to achieve the position of apparent (if temporary) dominance that it now holds.

The Corporate/State agenda promoting all of the most vile ills that we do notice all around us is being fueled and funded through a satanic economic system based upon the black magic of fiat currency. The sooner we recognize these connections and begin to retrieve the power we’ve given to those pushing us into the hell of Statism, the better.

What makes this urgent situation particularly challenging is that, as of right now in America anyway, few seem to have any interest in understanding, much less addressing, the problem of satanic economics.

Back in June, we posted Greece is the word. (That nobody wants to hear.), in which we noted:

“There are two topics that we write on fairly regularly here that routinely cause site traffic and interest to dive. But we keep writing about ’em anyway because they’re important.

One of those subjects is technology. The other is economics.

For various reasons – many of which are rooted in lousy “end times” views that fuel apathy, laziness and disengagement from all things not Vacation Bible School related – vast numbers of professing Christians in America have decided to just let the realms of art, economics, business, politics and pretty much everything else go to hell. (See: Encouragement from Satan.)”

Later that same month in Fake it ’til ya break it: What the Greek implosion tells us about America’s future, we added:

“What would you do if you found out that banks in America were not going to open today – or anytime at all this week – and that all bank-held accounts were effectively frozen, with a $60 daily limit on withdrawals?

These sad realities are all connected, however much we may like to pretend otherwise.”

Then in July, we kept “following the [fake] money” with Bankers to Laughing Greek Public: You can trust us! Really!, where we elaborated further on the true nature of the ongoing Greek economic crisis:

“So where does the wildly unbiblical and culture-enslaving practice of black magic fiat currency economics ultimately and invariably lead?

To State dependence for the masses and civilizational control for the elites who own and operate said State, that’s where.

Which is the whole point, from their perspective.”

August’s continuation of the global economic crackup inspired us to connect a few more dots, particularly those that relate to the present American situation, in Why “conservatives” love funding liberalism. (And how they do it.):

“This is what a worldview at war with God looks, smells, and spends like.

The answer to the first question is that modern American “conservative” types have become every bit as Statist as their Leftist counterparts. Through generations of Corporate-owned, State-run “education”, the vast majority of professing Christians in America have become loud and proud worshippers and defenders of the American State. (See: Confronting Americult.)”

This is not rocket science, folks.

It’s all actually quite obvious…but only when God graces us with the desire and ability to open our eyes and face reality.

That’s our hope in posting this today: That God might be pleased to use these clumsy, sometimes rambling words to wake people up and inspire them to biblical action while there is yet time. (Lord willing, and schedule permitting, my hope is to share much here in the future regarding practical steps that we can take along these lines.)

We are indeed living in a world largely dominated and controlled through satanic fiat economics. Even so, we have not been left unable to climb out of the hole in which we find ourselves and, beyond that, on to victories – economic and otherwise – that may now seem impossible from a worldly perspective. (See: Art, math, beauty, logic, law and economics…it’s all about Him.)

But ours is not a worldly perspective. It shouldn’t be, anyway.

The people of God really can (and will!) conquer even the seemingly impossible challenge of economics. (See: Jesus Conquers Everything.)

Our children and grandchildren need not be consigned to the ever-darkening hell of Statism that inevitably flows from the practice of satanic economics.

By God’s grace we really can restore the biblical beauty of work, private property, free enterprise, and truly free markets…but only through Christ, and we can only do these things through Him if we first, by His grace, open our eyes, acknowledge the evil around us (as well as our past enabling of that evil), and repent.

Then – and only then – all good things – including all good economic things – really and truly become possible.

I know that this sort of material is nowhere near as marketable as the Blood Moon efforts of John Hagee & Company or whatever other unbiblical escapist fiction is right around the corner, but if you appreciate these thoughts and know of anyone who might benefit from considering the nature of money and economics from a biblical perspective, please share this post with them. Please also prayerfully consider supporting our mission.

Thank you for your time and interest in these things.