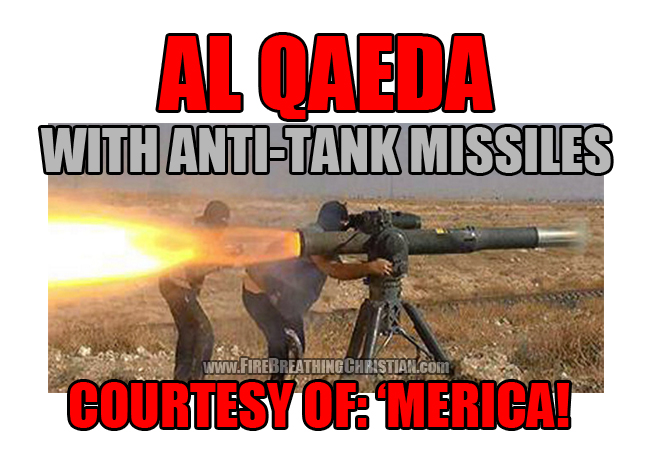 Over the past week – a week in which US President Barack Obama once again put a fine point on America’s long running desire to see Syria’s Bashar Al-Assad deposed – Russia has responded by pointing out an obvious and very inconvenient truth for proponents of US-as-Global-Good-Guy fiction.

That inconvenient truth is that ISIS is, like al Qaeda before it, is a product and tool of the United States. It is a tool of American Empire. It is a well funded and fueled foil by which the ever-expanding power of the American State at home and never ending wars of the American State abroad are justified and exalted to such a level that to even question them is to be deemed unpatriotic and therefore fundamentally untrustworthy. (See: Problem>Reaction>Solution – Why we will beg to have our freedoms taken away and go to war forever.)

Yet even as the official State/Big Brother Media narrative drones on, the curtain covering the little men trying to pull our strings and run our lives is getting thinner and thinner. The veneer of “good guy” status used to justify any behavior by American forces and allies is nearly gone…though that doesn’t prevent many from still trying to imagine that it’s there.

The thread running through al-Qaeda/ISIS/ISIL is proving to be an unintentionally useful display of naked deceit and the Statists’ favored Problem>Reaction>Solution paradigm in action. (See: Oops! We “accidentally armed ISIS”…again…, Oops, we “accidentally” gave ISIS a boatload of Toyotas, and ISIS: Priceless Tool of American Statism.)

As ZeroHedge reported this week, the latest in a looooooong line of “accidental” US support for ISIS/al-Qaeda & Friends comes in the form of…a sweet (and quite useful!) supply of anti-tank missiles:

Put simply, the US had become so desperate to preserve whatever was left of the strategy to overthrow Assad, that Washington had the mainstream media floating trial balloons to see if the public would accept the characterization of al-Qaeda as “moderate.”

Generally speaking, most Americans didn’t notice, presumably because they were too busy ogling at Russian fighter jets and/or Islamic State’s latest Hollywood special (which at the time was a clip of an SAA fighter being run over by a tank), but for anyone who did pick up on the fact that the mainstream US media had just officially (and posthumously) labeled Osama Bin Laden a “moderate”, the farce was complete.

. . . the fact that the US now counts al-Nusra as a de facto ally came as no surprise. The Saudis and Qatar have backed al-Nusra virtually from the beginning, and the US is all for anything that destabilizes Assad, even if it means funneling guns and money to the very same group that flew passenger jets into skyscrapers on American soil. And let’s not forget that this wouldn’t be the first time Washington has backed al-Qaeda. . .

. . . now, in what can only be described as an embarrassment of truly epic proportions, al-Qaeda has released a video thanking the FSA for supplying al-Nusra with American-made TOWs. Here’s Sputnik:

The Al-Nusra Front, Al-Qaeda’s affiliate in Syria, has released a grateful video, where they openly thank the Free Syrian Army (FSA), which the US has touted as a “moderate opposition group”, for supplying them with US-made anti-tank TOW missiles (“Tube-launched, Optically tracked, Wire-guided”).

How “unfortunate” that again and again and again we, the great force of goodness known as the United States of America, keep “accidentally” funding, fueling, and encouraging al-Qaeda, ISIS, and the like this way.

All while protecting the open “legal” operation of baby mass murdering and dismembering facilities all across the fruited plain at home, of course. (See: If ISIS did to one American child what Planned Parenthood does to millions, we’d go to war and kill them for it.)

‘Cause, you know, that’s what “freedom” and “liberty” looks like in the “land of the free” and the home of the NSA.

It’s time to wake up, my fellow Americans.

Wake up, repent of the pride and rank emotional manipulation that we’ve allowed to led us to where we are now, and beg God for forgiveness…beg Him to give us a heart and desire for His Law as our own……while there is yet time…