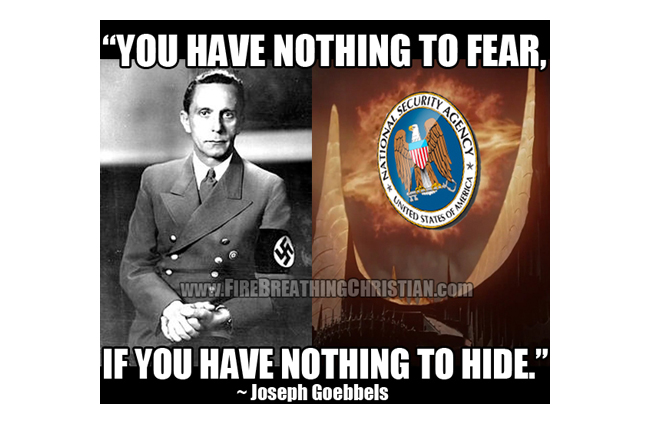 Is privacy just too much to expect these days in “the land of the free” and the home of the NSA?

Why yes, of course it is! (See: Privacy is for masters. Transparency is for slaves. Welcome to “the land of the free” and the home of the NSA.)

What a stupid – and increasingly unpatriotic – question. Why would any good American even think of such a question, much less dare to ask it out loud (or in public print)?

Of course it doesn’t.

And if you do dare to notice, definitely do not dare to question – especially publicly – the overtly Orwellian nature of the American State’s use of the presumably never-ending “war on terror”. (See: Problem>Reaction>Solution – Why we will beg to have our freedoms taken away and go to war forever.)

The latest step taken down our path to State-managed “safety” and “security” comes by way of the Cybersecurity Information Sharing Act, which was just now snuck through Congress (which is Republican led) along with the standard (and huge) public funding of Planned Parenthood’s openly operating mass child sacrifice business. (See: American “conservatives” fund Planned Parenthood (again) in new budget deal.)

As reported today at RT:

Under the cover of a late-night session of Congress, House Speaker Paul Ryan announced a new version of the “omnibus” federal government funding bill that includes a version of the Cybersecurity Information Sharing Act, outraging privacy advocates.

. . . “They’re kind of pulling a Patriot Act,” Robyn Greene, police counsel of OTI, told Wired. “They’ve got this bill that’s kicked around for years and had been too controversial to pass, so they’ve seen an opportunity to push it through without debate. And they’re taking that opportunity.”

Just think how cool and how righteous it would be if a Republican controlled congress was actually willing to stop  rather than perpetually fund both the evisceration of little babies via Planned Parenthood and the evisceration of privacy via the ever-growing power and “all seeing eye” of the American Security State.

It’s almost as though, for all of the loud talk and practiced political posturing to the contrary, the Republican Party at the highest levels is actually – in practice – supportive of the ongoing murder of babies and privacy in America.

The question then before us is: What are we as Christians gonna do about it?

(See: Roaring into Post-America Christianity and Man up, buttercup. Rome wasn’t conquered in a day.)