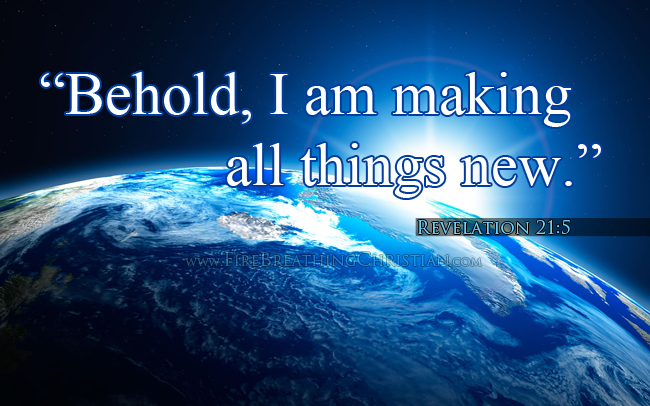 As we wade through another season of Corporate/State-sponsored American Political Puppet Theater steeped in the predictable fear- and emotion-based unbiblical “solutions” offered up this time by the likes of Donald Trump, Hillary Clinton, Ted Cruz and Bernie Sanders, it’s important that we keep our eyes on the prize, our hands on the wheel, and our minds focused on what’s really going on around here, that being: King Jesus is even at this very moment making all things in His creation new by the power of His work on the cross.

He is even now preserving, equipping and using His Spirit-filled people to pursue and apply His Gospel-fueled Great Commission, which is really and truly in the process of reconciling everything – politics, economics, business, art, science, technology, and everything else – to Himself.

Along the way to this assured and secured destination, the King of kings (and presidents and sheriffs and county commissioners) will use a heretofore unrepentant America as He pleases to bring ultimate glory to Himself and ultimate benefit to His people. He will break this proud, dying culture either through repentance and submission to Him as Lord in practice, or he will break this proud, dying culture by finally, fully grinding it under the heels of His judgment and wrath. One way or the other, America will serve Him, and perfectly so.

This is not our primary concern, and we really need to remember that right about now.

America is only as good or bad insofar as it conforms to or deviates from the Nature of God as revealed in His Word. In this everything-defining context, it’s important (albeit painful) to note America’s proud, open commitment to thoroughly satanic approaches to many (if not all) areas of life, including:

In light of these truths as tested by Scripture rather than by American Statist propaganda, what is the most likely thing that we should expect God to do with America?

That seems like something to think and pray about here and now in 2016 America as the latest wave of GOP and DNC wannabe saviors make their pitches, all of which dutifully avoid the clear, detailed repentance and submission to Christ as King in practice that is necessary to actually “make America great” or even good.

So as we hear again and again and again from this, that, and the other President wannabe telling us how they are going to “Make America Great Again!” or some similar such thing, simply weigh what they are proposing in light of Scripture, judge and/or dismiss them accordingly, and go about the business of spending your time, talent, and treasure on expanding the Kingdom of God in your life, family, church and community as the King has perfectly placed and equipped you to do in such a time as this.

Don’t worry, don’t stress, and don’t fear…no matter how much fear is pitched our way during this season’s run of the soon-to-be-cancelled-by-God American Political Puppet Theater.

Rest in the Nature of Christ as revealed in His Word. Find true peace in the unbreakable promises of the reigning King of all creation.

Pursue the Nature of Christ as revealed in His Word. Strive to learn in ever increasing detail what He has commanded out of a passion and desire to better know what He loves and know what He hates so that we might become more like Him.

Apply the Nature of Christ as revealed in His Word. Strive to do what He has commanded out of true love for Him.

And revel in the Nature of Christ as revealed in His Word…even as the world tells you that you must look anywhere but to Him for “practical” and “realistic” solutions to actually solve problems in “the real world”…a world actually owned, defined, and sustained by King Jesus.

. . . Jesus came and said to them, “All authority in heaven and on earth has been given to me. Go therefore and make disciples of all nations, baptizing them in the name of the Father and of the Son and of the Holy Spirit, teaching them to obey all that I have commanded you. And behold, I am with you always, to the end of the age.”

And he who was seated on the throne said, “Behold, I am making all things new.”