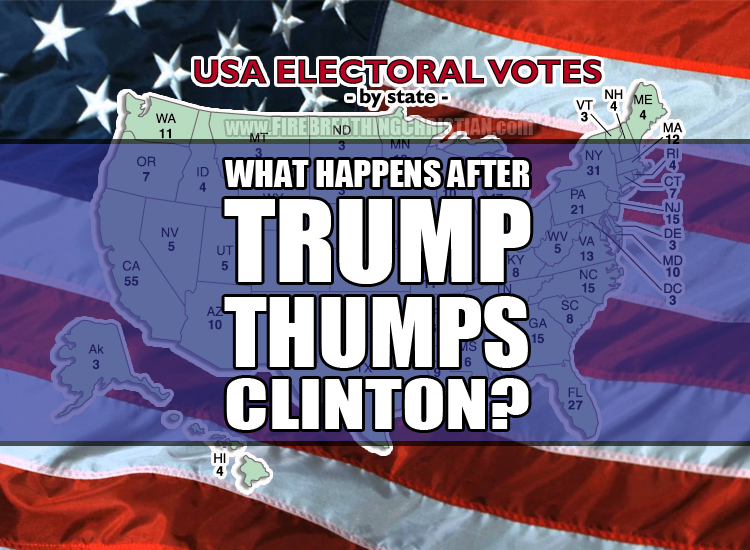 For whatever my thoughts on such things are worth (which is probably somewhere between very little and absolutely nothing), I’ve been suspecting for a while now that Trump is probably gonna win this thing pretty big in November. If pressed for a guesstimate, I’d say The Donald will likely have the biggest blowout win since the raging Progressive/Statist George H.W. Bush thumped the other raging Progressive/Statist Michael Dukakis back in ’88.

Of course, a million things could happen, many major shifts could (and almost certainly will) come, and who-knows-what might blow up between now and the election, but it sure seems like Trump is going to smoke Hillary on his way to becoming the next President of the United States.

So what if Trump is the next President?

What do we do then?

For starters, as always, we pray.

We pray for Trump as we pray for Obama now. We pray that whichever proud, unrepentant man God chooses to raise up in judgment against America might, by the same God’s grace, be convicted of his sin, repent of his sin, and submit to Christ as his King in practice.

That’s what we ought to be praying for, among other things.

From there, we simply keep doing what we ought to be doing right now as Obama is President.

We keep learning through the Word.

We keep growing in the Word.

We keep proclaiming and applying the Gospel-fueled Great Commission in the way we educate ourselves and our children, the way we build and manage businesses, the way we understand and pursue law, and the way we do everything else.

We keep advancing the Kingdom of God by any and all means available to us.

There’s nothing Barack Obama or Donald Trump or Hillary Clinton or anyone else can do to stop that.

Even now as the nations rage and the enemies of God plot in vain (see: Psalm 2), we have been perfectly equipped and commanded to advance the one true Kingdom while all others fall by the wayside, so we ought not be distracted – and we definitely ought never fear – the fall of any anti-Christian culture or empire. (For more on this, please consider reading The Kingdom of God vs. The (Collapsing) Empire of America and From Babel To Pentecost: How The Kingdom Of God Is Built Upon The Ruins Of Enemy Empires.)

Please remember these things as we roll through the thick of this latest installment of America’s Political Puppet Show and on into November’s election.

Please remember them as you are poked, prodded, pressured and nagged to fear Hillary and the Democrats soooooooooooooooooo much that you just have to vote for Trump to “Make America Great Again”.

Don’t fear Donald Trump or the Republicans either.

Let the pagans and paganized of both the Trump and Clinton camps do their things as God uses them to bring about His judgment and fulfill His purposes. Let them do their thing while we do ours, all by His grace and all for His glory.

With this important concept in hand, we are probably well served to at least begin to consider and prepare ourselves for certain impactful changes that will almost surely result from a Trump win in November.

Here are a few for your consideration:

1. Biblical Christian perspectives within the Republican Party will be significantly marginalized (from the already marginalized position that they hold now) in the wake of a Trump win in November. A win by The Donald will be presented as proof positive that the path to future Republican relevance and victory lies through the increased marginalization of true (meaning: increasingly unpopular and unmarketable) biblical Christianity in favor of a more and more openly pagan progressive approach to reality. And if Donald wins yuge, the volume of this argument will be amplified accordingly.

2. Republicans will once again become primary advocates for maintaining (and often increasing) the centralization of power in Washington DC. With a Republican in the White House, tens of millions who may have otherwise pushed (or at least been open to seriously considering) the sort of radical decentralization that is sweeping other parts of the world (think: Brexit) will find themselves very keen on preserving the gigantic, forced union of increasingly divergent states under the rule of Washington DC. The Donald has already made his commitment to judicial supremacy and any number of overtly socialist programs plain. Under a Trump administration, barring repentance inspired by the grace of God (which, again, we must be praying for in Obama now and Trump then, should he win), we will see significant growth in government power in the name of “making America great again”.

In this, The Donald will merely be continuing the trend long established by previous Republican administrations known for the radical expansion of government power and citizen dependence.

3. The next rung down the “lesser evil” ladder will come into view. With Trump/Clinton behind us, we will have established a new temporary bottom in the market for depraved, anti-Christian American leadership. This bottom will almost certainly be broken through in subsequent presidential election cycles as Christians continue to enable and embrace a thoroughly satanic approach to politics that has them relentlessly advocating and supporting increasingly wicked men and women to lead the culture to hell.

I hope that these points are helpful and provocative in the best sense.

We have been blessed to live in very interesting times. What an honor to have been placed here and now in such a time as this.

So man up, buttercup. Rome wasn’t conquered in a day!