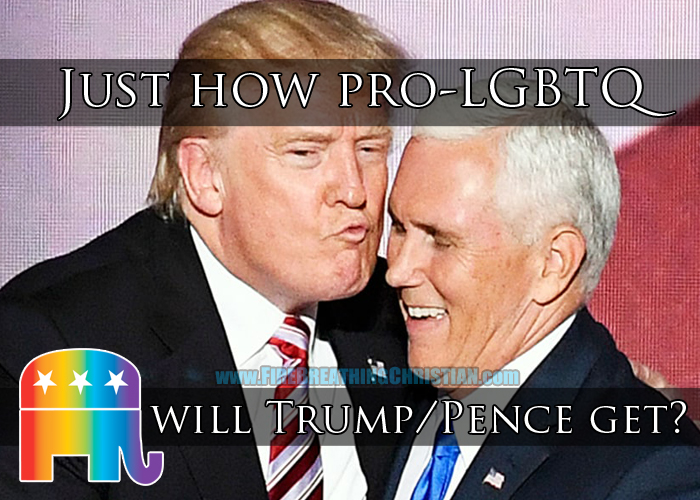 There’s a whole lotta gay news coming out of Trumpworld these days.

As in pro-“let’s obliterate the meaning of terms like family, marriage, husband, wife, and even gender itself and pretend it’ll all somehow work out in the long run as long as we have better jobs, more money, bigger houses and more stuff”.

Oh and “a bigger military”. Can’t forget that.

How else are we supposed to enforce our moral superiority all over God’s green earth?

This money over truth trade-off is a core component of the “Make America Great Again” worldview that now dominates the Pagan Political Right, which these days includes most politically active “conservative Christians” in the land.

So “conservative Christian”, as a label, isn’t worth much these days. As a term, it’s less and less associated with anything solid and good.

Kind of like family, marriage, husband, wife and gender.

These days, each and every term for a solid, good thing seems to be losing its coherence, and therefore its ability to positively shape the culture, at an increasingly rapid pace.

This is anything but accidental.

This has long been the plan and purpose of the System of systems under which we now live.

Even so, it can be particularly sad and frustrating to watch supposed conservative Christian types cheer and enable the continued march of the culture into the insanity of postmodern sexuality and the utter chaos and cultural implosion that inevitably follows in its wake, which is precisely what we have here in the early days of the Trump/Pence chapter of American history.

From Vice President Pence’s apparent caving toward a pro-LGBTQRSTD worldview to President Trump’s own re-re-reaffirmation of a pro-LGTBQRSTD worldview, we’re getting a pretty good sense of just how gay the next eight years are gonna be (assuming God allows the US to go on that long), at least in and around DC and with those who insist on maintaining a DC-centric approach to things.

Throw in the emergence of Milo Yiannopoulos, a stark raving pagan homosexual who’s blossomed into the oft defended darling of those passing for conservatives these days, and the trajectory is both dramatic and clear. (For more on this flamboyant/pathetic trend, please check out related articles we’ve posted in recent months, including: Gay Old Party: How The GOP Is Trading Christians For Homosexuals, Conservatives Champion Trump As “Most Pro-Gay Candidate In American Electoral History”, America’s Growing Appetite For Gay Conservatism, and Anti-Christ American Conservatism: It’s All The Rage.)

The early signs of Trump/Pence era gayness for America came days after the inauguration. As The Washington Post reported in late January:

The White House is pledging to keep the Obama administration protections extended to lesbian, gay, bisexual and transgender workers, a statement said, apparently responding to reports that the orders would be reversed.

“President Trump continues to be respectful and supportive of L.G.B.T.Q. rights, just as he was throughout the election,” the White House said in a statement early Tuesday. “The president is proud to have been the first ever G.O.P. nominee to mention the L.G.B.T.Q. community in his nomination acceptance speech, pledging then to protect the community from violence and oppression.”

Because the American State creates rights, of course.

And the “right” to murder babies for convenience.

And any number of other explicitly anti-Christian “rights” in America.

Anyway, without exploring those “rights” again in detail (something we do here regularly as a wake-up call and reminder), let’s move on into Vice President Pence’s apparent green lighting of Trump’s suicidally stupid embrace of the LGBTQRSTD movement.

Doug Wilson did a great job of addressing Pence’s apparent collapse in An Open Letter to the Vice-President of the United States, which opened as follows:

I am writing you as one who has appreciated your work, and as one who has been most grateful for your presence and influence in the new administration. Your impact has not gone unnoticed, and we thank God for you. I am extraordinarily mindful of what you did in appearing to speak at the pro-life march. I have thanked God for you. We have prayed for you.

At the same time, there has also been obvious influence in the other direction, and so I wanted to take this opportunity address you in my capacity as a minister of the Lord Jesus Christ. I know that you are a believer, and that you respect the authority of the holy Scriptures. I am appealing to those Scriptures, and come to you as a fellow servant of those Scriptures. I know, in fact, that we agree on this common ground.

I saw that you recently defended the president’s approach to LGBTQ issues, in his extension of President Obama’s executive order on LGBT rights. In the past you have said that you are a Christian first, a conservative second and a Republican third, in that order. In the past you have recognized that “societal collapse was always brought about following an advent of the deterioration of marriage and family.” But just recently, in this interview with George Stephanopoulos, you said that you applauded the president’s continued inclusion of the “LGBT community” in this way.  You further said that there is no room in a patriot’s heart for prejudice. This is problematic in many ways . . .”

I highly recommend taking the time to read all of Wilson’s article, which you can find by clicking here. After making many good points, he draws to a close with powerful words of warning (with bold emphasis added):

” . . . So in the name of the Lord Jesus Christ, here is the admonition. You know better. I know that you know better. I watched you interviewed about Bradley Manning, and admired how you made a point of referring to him as Private Manning over and over again, doing so in order to avoid honoring him with the name of Chelsea or the pronoun her. That was well done. You were walking carefully, but without compromise. What you were doing was obvious, but not obnoxious or provocative.

But you have now begun to do the one thing that you may not do. You may not defend corruption. You may be around it—in fact, you must be around it. This is what God has called you to. But you may not, as Jesus reigns, start strewing aromatic flowers over the cesspool. You may not start talking as though tolerance of sexual perversion were diversity. You must not act as though believing Christians really are homophobic and need to get over their “prejudice.” That narrative is the central lie—Seneca Falls, Selma, Stonewall—and the language you used in the interview with Stephanopoulos was a badly handled accommodation to that narrative. But the narrative is false, and further, you know that it is false. Return to an honest and winsome statement of your own convictions.

When this kind of thing comes up again—as it will, probably next week—you need to have an honest response ready. This response needs to be respectful of the president, but it must not maneuver you into calling good evil and evil good (Is 5:20).

I really believe that you want to help make America great again. But mainstreaming sexual deviance is not the way that happens. That is how we become one with Nineveh and Tyre.”

Do we understand Nineveh?

Do we understand Tyre?

Do we understand that when we avoid repentance and double down on pride, we’re in serious trouble?

In such a scenario, we’re not on the verge of greatness.

We’re on the verge of death.

Do we understand that when we put our faith in the almighty American State as the author and guarantor of things like the “right” to abortion, the “right” to “gay marriage”, and the “right” to openly worship of false gods, we’re done?

The LGTBQ movement is at this very moment rolling like a hot pink knife through butter made warm by generations of Americanized religion masquerading as Christianity.

This is the religion that Mike Pence is modeling now.

Please pray for his conviction, repentance, and restoration so that he might, by God’s grace, find the courage to stand on this critical issue at this critical moment.

We need men who will stand.