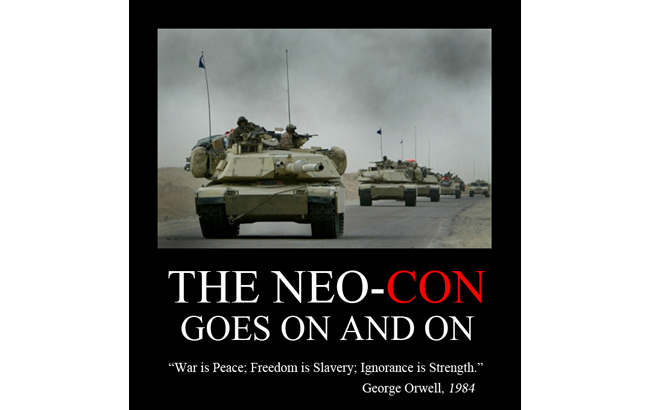 If there’s one thing that American “conservative Christians” have been conditioned to love, it’s war.

As reported this week by The Daily Beast (how perfect is that name/title, by the way?), Marco Rubio is coming on strong up against another fave of the Establishment Pagan Right, Jeb Bush, and he’s making this surge by stoking the never-ending, ever-building flames of perpetual war favored by both the Right and the Left heads of the Progressive Dragon that is trying its best to eat us alive…with our help, of course. (See: Problem>Reaction>Solution – Why we will beg to have our freedoms taken away and go to war forever.)

Here’s what The Beast had to tell us about newly minted Pagan Right champion of perpetual war, Marco Rubio:

Marco Rubio proved he can hang with the big hawks in his first foreign policy speech since he declared his run for president.

The student has now become the teacher.

Sen. Marco Rubio, once viewed as a protege of presidential competitor Jeb Bush, schooled the former Florida governor Wednesday evening in the first national security address of his national campaign.

As compared to Jeb Bush, who fumbled and stumbled through his first major national security address, Marco Rubio delivered a master class on foreign policy that spoke to the soul of the right’s hawkish neoconservatives.

In New York City, before the Council of Foreign Relations and their foreign policy experts, Rubio showed himself to be a peer.

Hands down the most awesome quote from this story is its reference to “the soul of the right’s hawkish neoconservatives”.

The story went on to add other nifty details (bold emphasis and appropriate links added):

Ultimately, Rubio’s appeal for a foreign policy based in morality is the strategy most designed to pluck at the heartstrings of American national security hawks.

It isn’t the mathematics of defense cuts that stir souls, nor the need to reauthorize Section 215 of the Patriot Act to continue the country’s metadata collection program. [See: So the American State has to destroy our freedom in order to protect it? Oh yeah, that makes sense and So even the Germans are creeped out by our Surveillance State.]

Instead, it’s the strategic belief in American morality and its link to foreign policy that drives the neoconservative movement. [See: Islamic worship in American government? Sure. Why not?]

Rubio hit all those notes: lofty words, with a measured tone—citing JFK and Pope Pius the 12th.

“America plays a part on the world stage for which there is no understudy,” Rubio said. He went around the world, criticising the regimes of the so-called Islamic State, Iran, Russia, China, Syria and North Korea. “Mankind remains afflicted, and… its destiny still largely remains in our hands.” [See: Oops! We “accidentally armed ISIS”…again…]

So there we have it. If we are sick and tired of having a Pagan Leftist like Obama lead us into the totalitarian hell of American Statism, then there’s only one thing to do: Replace him with a Pagan Right Neocon Hawk like Rubio. (See: How American Conservatives happily forge the chains of American Socialism.)

That’ll make it all better.

At least we can die in dignity with an (R) after our name on the tombstone, right?