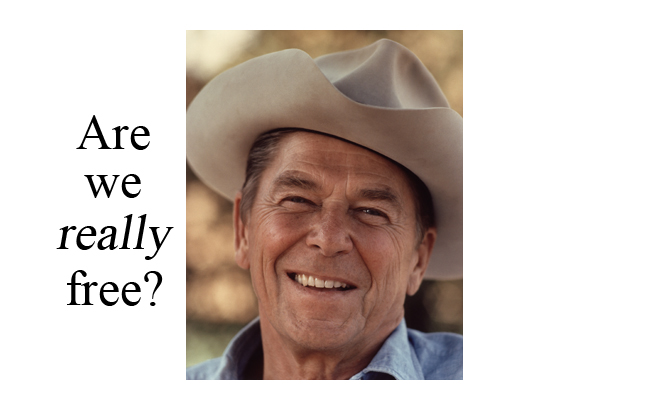 We’re encouraged to feel and do a lot of things on Memorial Day. We’re purposefully immersed in countless emotion-provoking images, speeches and sentiments. We’re encouraged to lovingly admire, support and adore our beloved American State. To that end, we’re called to remember the great sacrifices made by many to secure the freedoms and liberties that we now enjoy in America.

Consider the following quote from President Ronald Reagan as delivered on a Memorial Day in the early ’80s:

“I can’t claim to know the words of all the national anthems in the world, but I don’t know of any other that ends with a question and a challenge as ours does: Does that flag still wave o’er the land of the free and the home of the brave? That is what we must all ask.”

So “does that flag still wave o’er the land of the free and the home of the brave?”

Reagan noted that this is a question that “we must all ask”, and for good reason. The answer to that question seems kind of, um…important, doesn’t it?

Sure it does. Which, again, is why we’re not encouraged to ask it.

That said, let’s begin to consider the question by examining our national claim to things like “freedom” and “bravery”.

To that end, let’s start with freedom…

What has happened to the concept and application of individual privacy in the United States over the past decade or two? Are we more secure in our privacy as Americans, or less? Is our individual privacy more respected and protected by the U.S. government, or less so? (See: So even the Germans are creeped out by our Surveillance State.)

Are privacy rights equal for the political/banking/ruling elite class and the rest of us, or is true privacy only for them and decidedly not for us? (See: Privacy is for masters. Transparency is for slaves. Welcome to “the land of the free” and the home of the NSA.)

Is our national government’s approach to privacy for the typical citizen indicative of that government’s desire for the preservation of freedom or the erosion thereof en route to the imposition of full-blown Statism? (See: So the American State has to destroy our freedom in order to protect it? Oh yeah, that makes sense.)

Are we even free to own our own homes, or are we now all serfs on land owned by the government, obligated by that government to pay “rent” so that gems like Marxist-inspired “public schools” can be funded for the purpose of…making every generation of Americans more Statist than the last? (See: How “free public schools” make us all renters from the State.)

Are we free to work hard, invest and pursue business ventures based upon the solid, fair foundation for economics provided in Scripture, or are we instead operating under the purposeful bondage of a system of economics built upon the premise that a few elites must be given the power to craft “money” (fiat currency) effortlessly out of thin air so that the rest of humanity might be directed and controlled, effectively making the money-creating elite the owners of everyone and everything beneath them? (See: Fiat $lavery: We have been bought and paid for…with nothing.)

This list could go on and on, but since our first question has been answered, we will stop here.

So then, on to the next question: Are we brave?

Well, just as we are comparatively free for the time being when measured against certain other people (see: North Korea), so too are we a land blessed with many who are really, truly brave. But that really isn’t the point, is it? That isn’t where the question is going.

The question is aiming at our general identity as a people.

Are we “the home of the brave“?

Is true bravery something that we’re all about here in America, or is our approach to everything – bravery included – now thoroughly shaped, molded and controlled by our beloved American State?

Is true bravery something that is really and truly encouraged in the average American life, or is it something that is discouraged and retarded by things like State-controlled children’s “education”? (See: Retarded by Design: The Mind Blowing Success of State-Controlled “Education”.)

Are we in America encouraged to have the bravery required to test all things (including America itself) in light of objective Truth (the Nature of God as revealed in His Word), or are we instead discouraged from doing so? (See: The America Idol: How “Christians” Worship and Enable the Anti-Christ State.)

Want to test this?

Ask the typical modern day professing conservative Christian American whether the “freedom” to openly worship a false god is a good or bad thing in America (or anywhere else). The vast majority of responses will include some version of “yes” very likely to be accompanied by the claim that this “freedom” to openly worship false gods is – get this – a “God given right”. (See: Openly Reject God’s First Commandment? YES! WE! CAN!)

If you continue beyond that answer to push for biblical consideration of the supposedly “God given right” to worship false gods(!), you will likely be attacked personally and criticized as anything from unpatriotic and un-American to overly religious and not living in “the real world”. (See: The America Idol (Or: How I Learned To Stop Worrying And Love The Almighty State).)

‘Cause, you know, the real world is what ‘Merica says it is…not what Christ the King says it is…and if you don’t toe that line, you’re not a good ‘Merican. And pro’ly not a real Christian either.

See how that works in ‘Merica?

In America, even Christ and Christianity are measured by the guiding light of ‘Merica and ‘Merican tradition, rather than the other way around.

It all comes down to emotion-driven, self-serving idolatry.

And that, my fellow ‘Mericans, no matter how much it may be painted as bold American bravado, is anything but true bravery.

Bravery, as with all else in Christ’s creation, is only properly defined, understood and applied in light of His Nature as revealed in His Word.

When we demonstrate the true bravery to go to Him for the right definition and approach to everything from patriotism and economics to freedom and bravery, then we will have little trouble seeing that the answer to the second question under consideration is the same as the answer to the first.

Our pride and rebellion – epitomized by our celebration of the “God given right” to openly worship false gods – has made us cowards and liars who tend to lie more and more about everything…including how brave and free we are. (See: Are people who cannot dissolve a political union really free?)

So then we have the hard, sad answer to that important question posed by Ronald Reagan not that long ago: Does that flag still wave o’er the land of the free and the home of the brave?

The flag may well continue to flutter in the breeze over our government-run schools and government-owned homes, but we are not free and we are not brave…and the longer that we refuse to be biblically brave (through grace-fueled repentance and submission to Christ), the more un-free we will become.

It should come as no surprise that by pursuing a form of “bravery” that stands in proud, man-centered opposition to the lordship of Christ, we have been led to a kind of “liberty” that is also in opposition to Christ and, as a result, just as much of a lie. That kind of “liberty” and “freedom” – the kind that we have now in America – is the antithesis of actual freedom and liberty, which can only be found through loving submission to Christ as King in practice.

What we have proudly secured in place of Christ-defined freedom and liberty is a path to ever-increasing slavery that will culminate in the living hell of Statism (which is a living hell even when it’s an American flag that’s being used by the State in question).

May God grace us with the desire to remember and submit to His Nature as revealed in His Word as the standard by which – and the banner under which – all things are to be tested, understood and pursued in every realm of life.

Only that will make us brave. (See also: Roaring into Post-America Christianity.)

Because only He can make us free.