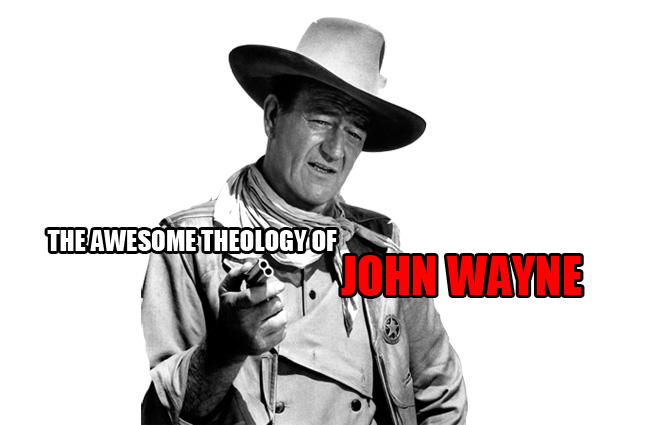 Oh sure, whatever we may think of his career or any particular film in which he may have appeared, most would – and probably should – have a hard time thinking of John Wayne as “The Duke” of theology.

Yet, as we covered last month in The Awesome Theology Of Dirty Harry, men like Clint Eastwood and John Wayne are God’s property to do with as He pleases, and He is often pleased to use apparent or even outspoken unbelievers (which I am not necessarily accusing anyone of being here) to proclaim truth in spite of their denial of Him as Lord. In this context, characters like Detective Harry Callahan and those played by The Duke often serve as a reminder of some profound, unbreakable, and beautiful biblical truths, including:

So it is that when John Wayne as Sergeant Stryker says that life is tougher than it needs to be when you’re stupid, he is echoing, however unintentionally, a fundamental truth of Scripture:

The fool says in his heart, “There is no God.”
They are corrupt, they do abominable deeds,
there is none who does good.
Psalm 14:1

Again and again, God makes plain in His Word that He is the starting point for all knowledge, truth, wisdom, and life. We do not “ramp up” to embracing Him by way of our pursuit and application of knowledge. Rather, we rely upon Him as the basis upon which there is such a thing as knowledge in the first place…whether we realize it or not.

Put another way, we’re being stupid.

This is why discipleship is essential.

Discipleship in accordance with the Gospel-fueled Great Commission is the only means by which we are able to abandon our self-centered, self-referential, self-serving stupidity and find true joy, peace, security, and prosperity through ever-increasing obedience to Christ as King in practice. (See: The Awesome Gospel.)

This is one great purpose of the Great Commission: To save us from our stupidity.

Once freed by the grace of God through His Spirit’s supernatural indwelling within us, we are finally free to seek and serve Him in every area of life.

Once drawn by His grace and filled with His Spirit, we are enabled to reject the stupidity of the world and pursue true knowledge, wisdom, joy, and life through loving submission to Christ as King in practice.

This is how we become able to radically impact everything that we touch, including education, politics, economics, law, and art. (See: Jesus Conquers Everything.)

This is how we are supernaturally empowered to win for Truth what has been temporarily lost to stupidity.