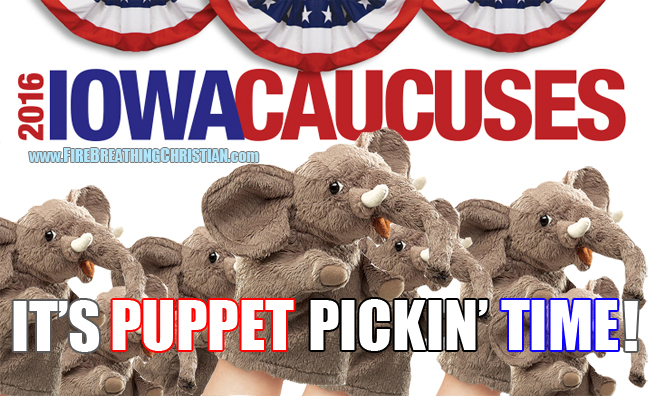 Confronting a devotee of The American Political Puppet Show is a lot like confronting a fan of professional wrestling.

While they’ll of necessity concede much of the laughably contrived and choreographed nature of their prized fiction (you can only pretend so much), they just can’t bring themselves to admit what each and every connected dot and rational observation confirms at every point along the path of of examination where where their favored fantasy is concerned. That being: It’s fake.

And a pretty bad and poorly concealed one at that.

Oh sure, there are instances and events scattered along the way that are not as controlled as the rest of the program, but those scripted “wing-it” episode slots are almost always only allowed to occur within prescribed parameters that are themselves designed (meaning, again, contrived and controlled) to propel the whole show on down the track, giving it just enough of a veneer of credibility to maintain a “willing suspension of disbelief” on the part of its fans…or, more appropriately in the case of American pro-wrestling and presidential politics “believers”, a willing suspension of rational thought and sanity.

Talk to a pro-wrestling fan about the farcically fictional nature of their “sport”, and they’ll often concede much early on in the conversation, often out of what seems to be an inherent embarrassment at the position they know they’ve put themselves in (but just cant openly admit and fully face). But at some point along the way they’ll transition into a defense of pro wrestling, claiming that, despite all  – and I do mean all – evidence to the contrary, it is still somehow “real” in a fundamental, sport-legitimizing way.

Much like devoted fans of the just-as-contrived, just-as-controlled national-level political scene in America.

I was one of these folks for a very long time ’til the Lord opened my eyes, all by His grace (meaning not at all due to anything inherently brilliant or better-than-anyone-else about me).

Having since repented of my slavery (a bondage that I adored, by the way, since I truly loved the spin, rationalizations, games and propaganda offered up by the Pagan Political Right), I thought I might try to encourage others who are where I once was to think biblically about exactly what is going on here as we ramp up for the big WrestleMania event scheduled for tomorrow: The Iowa Caucuses.

As we move into Monday’s Big Event, let’s remember that every Republican seeking the GOP nomination is a stark raving Socialist and Statist.

Every one of them!

Sure, some are more bizarrely anti-Christian than others, like The Donald, who is a biblically illiterate casino and strip club promoter. (Little things like that don’t keep him from receiving the endorsements of “American Christian conservatives”, of course, which alone confirms that professing Christian conservatives are most responsible for leading our culture to hell.)

But even the “nice, ‘Christian'” guys like Ted Cruz are absolutely drenched in Statist religion and a State-centered worldview.

At this point it’s worth revisiting a post we made back in September- 5 things every Statist will agree on at tomorrow’s Republican “debate”. – which included the following tidbits of hopefully helpful info:

All of the evidence points to the same conclusion, if only we will examine it honestly under the perfect light of Scripture.

Back in December, we posted What if American Christians were half as committed to obeying Christ as they are to following the Republican Party?, in which we noted that politics aren’t the problem. It’s our allowing the enemies of Christ to define and dominate politics that is the problem:

That’s what politics are here in the real “real world” – a world that Christ created, owns, sustains,defines, and calls His people by His grace through His Spirit to subject entirely to His will (see: 2 Corinthians 10:5).

So how’s this Pagan Political Right Wing deal going for us?

How’s our perpetual support of “lesser evils” working out?

What are the results?

What are the consequences?

Do we even really want to know…or would we rather just go on pretending, like good little WWE fans?

We continues the December article with the following hopefully convicting (and subsequently repentance-inspiring) questions:

May God grace His people with the brokenness and shame necessary to repent of and repudiate the political puppet shows that have long been used to distract us from our Lord, dissuade us from our mission (the Gospel-fueled Great Commission; see Matthew 28:18-20), and lead us further into the ever-increasing darkness of American Statism…while there is yet time.