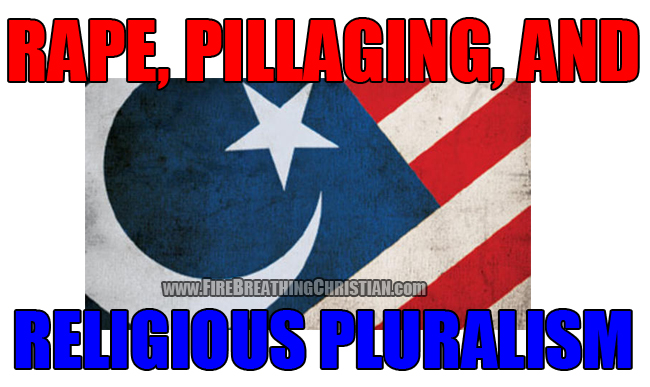 The enlightened, Progressive, and thoroughly paganized people of Europe are being forced to do a lot of things these days.

For one, more and more of them are being forced to endure sexual assault at the hands of various representatives of the “Religion of Peace” (AKA Islam).

For two, more and more of them – in response to the literal rape and pillaging ramping up around them – are beginning to reconsider some fundamental questions. They’re being forced to re-evaluate some basic presuppositions and assumptions that they’ve made (and been encouraged to make) for a very long time now.

Assumptions like: The freedom to openly worship any god and openly practice any religion is an inherently good thing. (See: Note to ‘Merica: There is no “God-given right” to worship false gods. Repent accordingly.)

While it’s beyond sad and tragic that it’s taken the mass sexual assault of recent days to open the eyes of some, it’s still very good and encouraging to see that some eyes and minds are at least beginning to open to the essential and unbreakable nature of God’s Law everywhere in God’s creation.

Back on September 11 we asked the question: Why do we allow the open practice of Islam, witchcraft, and Satanism in America?

While most of the initial reaction to our exploring such questions has tended to be defiant and quite defensive of American-style “freedom” over any subjugation to the Word of God on the subject of things like worship, law, and civil government, circumstances unfolding here in God’s world are inspiring, by His grace, more and more Europeans and more and more Americans to reconsider the satanic model for law that we’ve been pitched and sold for so very long now.

And that is a very good thing.

Along those lines, ZeroHedge recently shared a summary of some of the more recent relevant developments in Europe where the “Religion of Peace” is concerned:

On Tuesday, we documented multiple reports that suggest as many as 1,000 men “of Arab or North African origin” participated in what appeared to be coordinated attacks on German women in Cologne.

“About 90 women have reported being robbed, threatened or sexually molested at New Year celebrations outside [the city’s] cathedral,” Reuters writes, adding that the men were “between 18 and 35” and appeared to be “mostly drunk.”

. . . “A spokeswoman for the interior ministry in North-Rhine Westphalia, the state in which Cologne is located, said there were three suspects but declined to give further details,” Dow Jones says, before detailing the alleged attacks: “Police have said the women reported small groups of men attacking them among a crowd of around 1,000 people that had gathered in front of the station to set off fireworks. Women were allegedly cornered by groups of 20 to 30 men, mugged and in some cases sexually assaulted.”

One important note of clarification here: Assuming these reports are accurate, immigration is not the problem. Islam and its natural propensity to inspire sexual assault are the problems. (See also: Our Immigration/Socialism/Statism Problem.)

And what is the solution?

The true, everything touching and everything defining Gospel of Jesus Christ or, put another way: the true and complete lordship of Christ over every realm of His creation in practice. (See: Art, math, beauty, logic, law and economics…it’s all about Him.)

This is distinctly different from the phony-baloney Americanized-religion-masquerading-as-Christianity that tells us we can credibly claim Christ as Savior while rejecting Him as the Lord over our everything…including our law, economics, art, business, and civil government. (See: The True Gospel Conquers Everything; The Modern American “Gospel”…Not So Much.)

Until we repent and submit to the one true Christ as King in practice, the raping and pillaging will only continue…and grow…both “over there” in Europe and “over here” in the proud, unrepentant land of America. (See: Will America repent or will America be destroyed?)

So take note of what’s going on in Germany this week, American.

Barring culture-sweeping repentance and submission to Christ as King in practice here in America, you can expect to see the same (and worse) soon here in “the land of the free”.