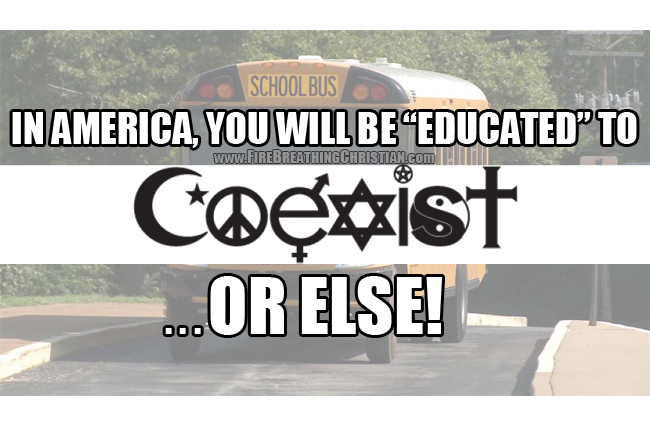 In this, false gods predictably aim to be something like one true God they strive to displace.

The one true God despises these pretenders and would-be competitors, knowing that they can only lead those who follow them into darkness and death, which is why He has plainly forbidden the worship of false gods anywhere in His creation (which includes 2016 America, of course, not that we seem to care).

It is in this context that we should consider the religion of Statism as practiced in America and throughout the world as it specifically relates to one of the likely paths that this counterfeit religion will take to suppress the people of God in their practice of educating children in accordance with His Word.

Statism, be it of an American flavor or any other, cannot tolerate any other god (or God) as a rival to it’s claim of ultimate authority on earth. To that end, American Statism has sought to provide its subjects with the illusion or veneer of reverence for God (and all gods) by exalting and institutionalizing the explicitly anti-Christian concept of religious pluralism.

Through a uniquely Americanized spin on the satanic doctrine of religious pluralism, Americans – most of whom claim to be Christians – have been conditioned to accept and even cherish the practical, worldly virtue that “all gods and religions must be treated equally”.

This is, of course, one of the most obvious and flagrant lies imaginable from anything remotely resembling a true biblical Christian worldview…but we are a people who have long abandoned such an approach to reality and life in practice.

The present threat of “radical Islam” – largely funded and fueled by the American State to use as a tool both at home and abroad to increase the power of the American State – and the “radicalization” of certain Muslims will be used as a generic argument against all “radical” expressions of life that do not conform to the religion of American Statism. (For more on the American State’s purposeful use of Islam and other instruments of fear in this way, please read Problem>Reaction>Solution – Why we will beg to have our freedoms taken away and go to war forever.)

Put simply, in the context of the coming American Statist assault on Christian home education, it’ll go something like this:

Too crackpot conspiratorial to possibly be true (or truly be possible), you say?

Well, check out this article posted recently by the UK’s Daily Mail, entitled Home schooling of 20,000 children across the country will be reviewed amid fears they are being ‘radicalised by parents’ , which kicks off with the following:

“Education Secretary Nicky Morgan has called for a review of home schooling amid concerns that thousands of children are being radicalised by their own parents.”

Please do read through the whole article when you get the chance.

Then ask yourself what the State – the American State – might now consider to be “radical” thoughts when it comes to how law, marriage, family, and even civil government itself are to be understood and pursued.

Might pretty much all of the articles posted here qualify as evidence of “radicalization”?

Do you see the threat?

Let me be clear: I’m not encouraging you to fear the threat; only to notice it. Fear of anything that these Statist goons hope for or have planned is not to be a part of our understanding. We are not to fear them at all, as the fear of man is the antithesis of faith.

They are to fear us.

Which is precisely why they will whatever they are able to do to make us go away if we will not convert and conform to their religion.

The more we live out the fear of the Lord, the more they are confronted by the Gospel command to repent, believe, and submit to Christ as King in practice over every area of life.

The more truly educated we and our children become, the more we will understand and apply these beautiful, albeit challenging, truths, all by God’s grace, all for His glory, and all to the benefit of countless generations to come.

The more we savor and pursue the life-giving, everything-defining, world-changing fear of the Lord, the more dangerous we will become to Statism and every other false religion that would suicidally presume to stand against the inevitable victory of Christ in every realm of creation through His faithful people’s pursuit and application of His Gospel-fueled Great Commission.