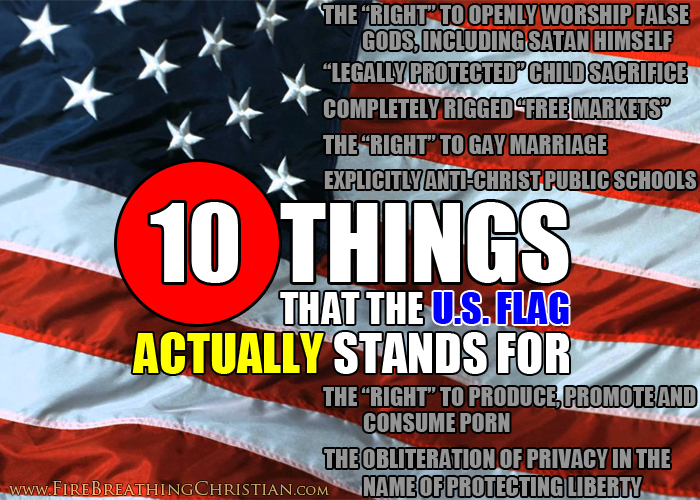 What with all the political posturing and campaigning kicking into high gear heading into the 4th of July of a presidential election year, it seems like a good time to take an honest, sober look at what the US flag actually represents right here and now in reality on planet earth, as opposed to what we may imagine it to symbolize, what we wish it symbolized, what it may have in part symbolized at some point in the distant past, or what we hope it might one day symbolize in the future.

We need to deal with reality.

As it actually exists.

We have to stop allowing the American flag to be so successfully used as an “off switch” for biblical criticism.

To that end, I’d like to offer for your consideration ten things that the US flag has become very clearly and very proudly associated with the world over for a good long while now.

Obviously this is not a comprehensive list and I’m in no way aiming to minimize the many remaining freedoms and blessings that we do have here in America by God’s grace and in spite of the American State and the power-mad pagans atop both major political parties who are working so hard to steer it into the darkness of tyranny.

My hope in pointing to these hard truths regarding what the US flag has come to represent is not to merely throw stones or eggs or whatever, but to encourage the very conviction and repentance necessary for American culture to be reconciled to Christ, so that America might avoid the death being begged for now by the manner in which we enable and pursue explicitly anti-Christian approaches to law, war, economics and children’s education because “that’s just how it’s done these days in America”.

So please have a gander and take a moment to consider whether the US flag isn’t clearly and often quite proudly associated with each of the causes and philosophies listed here.

I’m going to work my way down from the least to the most important. Here we go:

10. State ownership of all real property. Here in “the land of the free” we are not even free to actually own our own homes. The State owns our homes.

If you’re still operating under the illusion that Americans can actually own homes in America, just try not paying the State its rent (“property tax”) and see what happens. The American State assumes ownership of all real property, charging renters an annual fee used to fund things like State-managed anti-Christian “education” for American children, which most American parents (including most professing Christians) now seem to adore. These All-American Temples of Statism become more flagrantly sensual and anti-Christ by the week, it seems…yet American Christians keep right on feeding their kids to the beast (usually with pastoral encouragement).

9. State ownership of all people. Recently we covered how American Statists in the US Senate passed legislation that would formalize State ownership of all adult women for the use of feeding them into its perpetual war machine. The fact of a claim to ownership of people is plain here, though by using the term “draft” or “selective service” and wrapping the concept in the American flag and good ol’ patriotism, most State-programmed Americans wholeheartedly support State ownership of the American people, including their own daughters, wives, and mothers. What a truly pathetic and cowardly thing we’ve become…but, oh, we’re still proud. Yes, very proud!

8. Mass enslavement and economic domination through the black magic of Monopoly money (aka “the U.S. dollar”). Of course, as we’ve tried to help people understand again and again (including here, here, and here), the whole farcical American State empire is literally funded and fueled with nothing real. The “money” it props up (the US Dollar) and then uses to dominate its own people and as many globally as possible is literally a fictional construct itself crafted effortlessly out of thin air by some so that they might effectively own and control everyone and everything beneath them. The US dollar is the epitome of what God describes as an abomination in Proverbs 11:1.

This is how the perpetual Welfare State is funded and enabled to enslave tens (and soon hundreds) of millions of Americans.

This is how the perpetual Warfare State is allowed to build and field armies and navies that it literally could not even begin to afford in the real world under any sort of sane economic construct. (See: How can a “broke” country have the biggest military in the world?)

And this is how the American State will continue to fund and grow these radically unbiblical constructs…until and unless the satanic economic foundation of it all is finally brought down. (Which will inevitably happen. See: Why our economic Jenga Tower Of Babel must fall.)

7. Completely rigged “free markets”. These days, the artificial propping up of things like stock prices and home values has gone well past the ludicrous and well into territory appropriately described as insanely destructive, with heavy emphasis on the insane part. It’s now routine for bailouts and “help” for those deemed “too big to fail” and for the asset classes (like homes and stock prices) deemed “too important” to have their value determined by anything remotely resembling an actual free market – something that simply cannot exist when elitist-manufactured Monopoly money is the foundation of the whole thing, as is the case with any economy pegged to the US dollar.

5. The “God-given right” to “gay marriage”. Hey, when law is up for grabs and ultimately to be determined by “We the Paople” apart from the Word of God, then when the majority is for the absurdly perverse notion of “gay marriage”, that’s exactly what they’ll get…until they are finally squished completely under the righteous judgment of the holy God who owns them, their land, and everything else.

4. The multi-generational promotion of explicitly anti-Christian “education” through public schools. Which, of course, are funded through the confiscation of  basic property rights in accordance with point #10 above, and which also no-so-coincidentally represent multiple planks of the Communist Manifesto.

3. Perpetual war with American State-funded terrorists abroad and the obliteration of basic privacy rights at home in the name of protecting liberty, freedom, and the American way. (See: Privacy is for masters. Transparency is for slaves. Welcome to “the land of the free” and the home of the NSA and Problem>Reaction>Solution – Why we will beg to have our freedoms taken away and go to war forever.)

2. “Legally protected” child sacrifice. Yes, we’ve become so comfortable with the ongoing, systematic murder and dismemberment of American baby boys and girls by the millions that we barely even notice it anymore. And yes, a Republican appointment dominated Supreme Court just upheld this most satanic of systems that has now become one of the most well known and most vigorously defended “rights” over which the flag of the American State flies. (See also: 51,000,003 reasons why America owes Nazi Germany an apology.)

1. The “God-given right” to openly worship false gods, including Allah and even The Devil himself. This is where it all begins, folks: The All-American repudiation of God’s explicit prohibition of allowing the open worship of false gods anywhere in His land…and yeah, that unbreakable Law actually applies to We the People here in America.

These are the hard but undeniably true realities that we must deal with, my fellow Americans.

As the American State cracks, teeters and falls around us, we have no business being surprised.

How could it do anything but crumple up and die in a universe defined and held together by the unbreakable Nature of God?

We also have no business being fearful.

Our hope is not in America.

America’s hope – it’s only hope – is in Christ; in submission to Christ as King in practice.

That’s the truth we must continue to proclaim and apply in our lives at every opportunity, even as America fades into history and the Kingdom of God continues on, conquering every corner and every aspect of God’s creation, all by His grace, all for His glory, and all to the eternal benefit of His people.