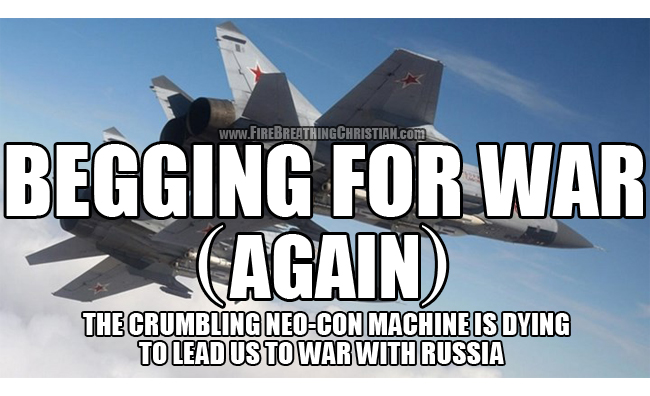 Ah, October…leaves change color, the air gets crisper, and, if you live in America (or the America-led West), the clarion call to war with Russia picks up pace and gets really loud.

So here we are in early October of 2016 and, just as surely as Pumpkin-flavored everything makes its annual assault on menus across “the land of the free” and the home of the NSA, the drumbeat leading us to war with Russia is pounding away.

The “evil Russians” are at it again!

Right near their own land in a country that wants them there, no less!

So let’s get our military involved in “protecting the rebels in Syria” (*cough* *cough*…ISIS) from “the evil Russians” by taking on the Russians at their doorstep and toppling the Syrian government all in the name of peace, justice, and the American way.

Seems like a good time to take a chill pill and actually think critically about what’s going on here (again), doesn’t it?

So let’s take a sec to set aside what we may want to believe (and are encouraged to believe by the elites above us) about ourselves as a people and the purpose of things like a military, and instead take a cold, sober look at what we’ve really become and the ugly reality in which we live…and which we as Christians have been called and equipped by Christ to confront and correct in accordance with His Gospel-fueled Great Commission.

To that end, I offer the following for your prayerful, thoughtful consideration…

When the American Orwellian State isn’t floating the idea of drafting our daughters into an army with a lesbian general or commissioning a new naval vessel named after a legendary gay rapist, it’s often using its fiat funny money fueled, globe-spanning military tentacles to advance all manner of anti-Christian approaches to war and empire building, all with the blind adoration and support of the vast majority of professing conservative Christians in “the land of the free” and the home of the NSA, of course.

So with the “Hey, I have a great idea: Let’s go to war with Russia!” talk picking up pace again, it seems like a good time to re-share part of an article that we originally posted late last year entitled Begging For War (Again):

That’s the sort of thing we were sharing here about a year ago.

Seems more than worthy of a re-share now.

For more on the ongoing drive of American Statists to lead us to war, please consider the following:

Need (another) war? No sweat! Just play The Hitler Card