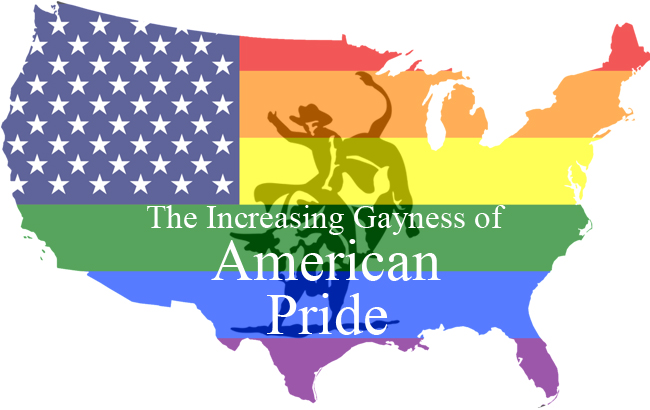 For those who scoffed at the notion that acceptance of the homosexual lifestyle and “gay marriage” as legit would somehow lead to a “slippery slope” problem whereby even more bizarre and brazen forms of sexual perversion would be normalized over time, well…they were kinda right and they were kinda wrong.

They were right because we really aren’t seeing the slow, gradual “slippery slope” style degradation that was predicted.

They were wrong because what we are seeing – and experiencing – instead is more of a “slippery cliff” kind of deal, with our culture now in the process of enjoying the straight down plunge that always had to logically follow the undefinition of marriage, gender, and family as it has been undefined here in “the land of the free” and the home of the NSA, also proudly known as: ‘Merica.

Why am I fairly certain that we’ve taken a “slippery plunge” off the big bad ‘Merican cliff?

To that question I have a four word answer: Gay Rodeo in Arkansas.

Yep, even American Rodeos are going gay, transgender and whatnot. Even in Bible Belt Dixie…and it doesn’t even seem to be that big of a deal to most living in the area, according to a report published by Reuters earlier today.

So how’s that ‘Merican-style “freedom”, “liberty” and “law” workin’ for ya, my fellow ‘Mericans?!

How awesome is it that we live in a land unrestrained by the Law of God?!

How cool is it that we have the “grace”, “liberty” and “freedom” to do whatever we want?!

Well, howsabout this for a little sample of how awesome and cool our ‘Merican style “freedom” has become in practice:

In very recent ‘Merican history we’ve been “blessed” with “Transgender Girl(?) Scouts”, U.S. Army Cadets ordered to march in red women’s dress heels, our very first openly lesbian Army General, government schools teaching Kindergarteners to embrace Transgenderism, and Bruce Jenner “Transitioning” into a Republican Christian woman. All of this comes on the…*ahem*…heels of a long-running, long-building wave of pressure from the Corporate American State in support of establishing a new “Mark of the Beast” style approach to economics aimed at punishing and ultimately crushing all obedient Christians who dare to stand against the big gay wave of American Pride.

There’s an idiotic-but-popular idea rollin’ ’round out there that goes something like this: My favorite things aren’t impacted all that much by whether or not the culture rejects God.

My football fixation can go on pretty much unbothered. (See: Fiat Bread and Football Circuses in Romans 1 America. )

My gaming and playing can go on uninterrupted.

My television and movies are gonna be fine. (See: Christian arts, public restrooms, and how the pursuit of excellence got “Left Behind”.)

My child’s government school is different. (See: Ten problems with the “salt and light” excuse for feeding children to the State and Ten answers to those “What about socialization?” questions from public school advocates.) 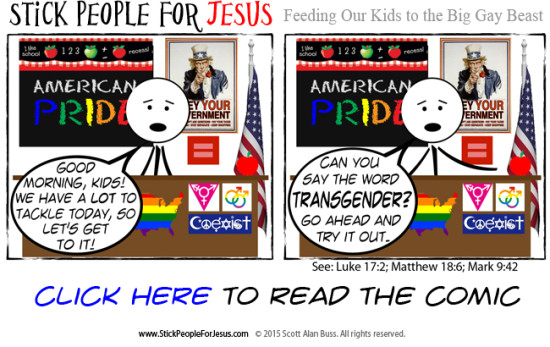 Oh sure, the stuff we actually care bout might get a little gay around the edges, but it’s not that big of a deal.

Besides, aren’t people free to do as they please in ‘Merica? Can’t we just live and let live? Can’t we all just get along?

This is the attitude of not only the typical ‘Merican, but the typical professing Christian evangelical ‘Merican. And this is why the Big Gay Wave and it’s advocates are laughing and skipping from one culture-transforming battlefield rout to the next. (See: Why Gays Love (and Laugh at) Christian Appeals to “Religious Tolerance”.)

With that in mind, let’s read a little more from that tragically telling story on Gay Rodeo in Arkansas (with bold emphasis added):

This year, they put up a sign directing traffic to the event, and no protesters came.

For two days, gays and lesbians and at least one transgender man competed in barrel racing and bull riding on the soft soil of a fairgrounds arena at the rodeo that looked like just about every small-scale rodeo held across the country.

The arena’s railings were festooned with the banners of corporate sponsors advertising products such as Bud Light beer, Jack Daniels whiskey, and Gun Oil personal lubricant.

Hey, if there’s a buck to be made, it has to be made, right? I mean, what are the shareholders – including tons of “Christians” – gonna say if dollars aren’t chased by any and all means available, right? (See: Dear professing Christian investors: Please stop funding the war on actual, obedient Christians.)

In the state capital and some other pockets, support for the LGBT community has been strong.

Only days before the rodeo began, the Little Rock Board of Directors approved an ordinance barring discrimination against gays in municipal hiring and among vendors doing business with the city.

In Fayetteville, home to the state’s largest university, a human rights policy friendly to gays was approved by aldermen but reversed in a referendum spearheaded by religious conservatives.

Back at the rodeo, Earp and partner Jonathan Suder, 25, dressed in typical western garb, insist they are not asking for “anything special.”

“We just want what’s right,” said Earp, which for both men means marriage, a legal covenant denied them in Arkansas and Texas.

See there? All they want is “what’s right”.

But by what standard?

And by what standard will we reply to their pleas, propaganda, increasing persecution and economic terrorism?

How we answer that question as a people and culture will determine the fate of the United States, and as Christians in ‘Merica, we shouldn’t want it any other way. (See: Roaring into Post-America Christianity.)