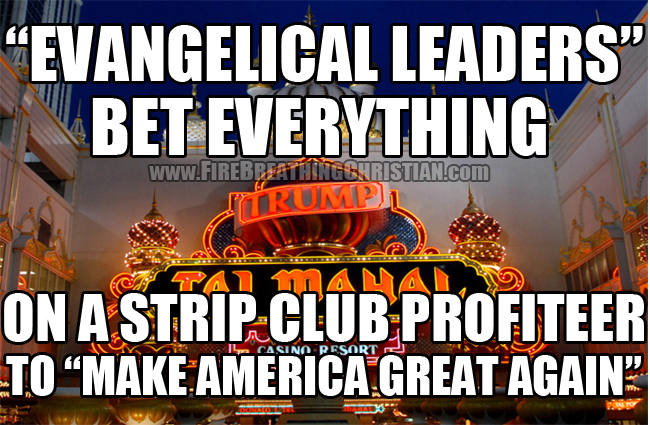 As in, pastor Robert Jeffress of the First Baptist (Mega-)”Church” in Dallas.

As in, the same Robert Jeffress we covered back in July when we chronicled his ridiculously anti-Christian, pro-Statist approach to the biblically defined subject of children’s education.

So it really shouldn’t come as much of a shock to learn that the same guy has joined fellow wolf-in-church-leadership Jerry Falwell Jr. in heaping praise upon one Donald J. Trump, aka “The Donald”, aka “American Evangelicals’ Favorite Casino/Strip Club Profiteer”.

As WND (and many others) reported this week:

Robert Jeffress, who pastors the First Baptist Church in Dallas, Texas, and who has been making the introductions of Donald Trump to several of his recent campaign audiences, stopped short of endorsing the billionaire during a recent media interview – but basically only because his nonprofit exemption with the IRS would have been threatened had he appeared to have given his stamp of approval to one candidate over another.

“I am not officially endorsing any candidate but I was happy to pray at Mr. Trump’s events on Saturday and in Iowa and also to introduce him,” Jeffress said, in a chat with the Christian Post. “And frankly, I would not have done that if I did not believe that Mr. Trump could be a very effective president of the United States.”

Gotta protect that State-issued license to “preach” (and by that we mean preach the religion of American Statism, not biblical Christianity).

I mean, losing that State license to “preach” would cost his “church” money – maybe even a whole lotta money – and money is one of the two greatest measures of success from the perspective of those who build churches using pagan business models over and against the Christ-centered, Spirit-empowered parameters of Scripture.
Money and membership.
Those are the numbers that really matter to American Megachurches.
Those are the two greatest measures of success in the world of “preachers” who have prostituted themselves out to the world and encourage their flocks to do the same, so that they might appeal to a God-hating world and build their “Christian” business/ministry empires.

This is the language used by God in His Word to describe the type of “leader” who would claim to represent Christ while gleefully endorsing a biblically illiterate casino/strip club profiteer’s quest for power to “make America great again”. (For more on the theology of The Donald, check out Two Corinthians and Donald Trump walk into a bar…)

In all fairness to Trump, it only seems right to note here that his promotion of and profiting from casinos and strippers is nowhere near as pathetic and destructive as the promotion of and profiteering from outright spiritual prostitution and whoredom by the likes of Falwell, Jeffress, and scores of other State-sponsored “pastors” all across the increasingly fruity plain…a land left wide open to ruin because the same “Christian leaders” have long abandoned the everything-touching, everything-defining Gospel of Jesus Christ for a simple, small, sequestered, and pathetic little “Gospel in a bottle”.

Their Candy Christianity isn’t helping us. It’s killing us.

The American culture is where it is now because of “Christian leadership” such as this.

The Donald is not the problem.

He is a symptom.

The same goes for his casino and the strip club therein.

They are symptoms of a disease promiscuously promoted by professing Christians through spiritual prostitution and whoredom.

They’re just a gang of self-centered, self-serving whores, after all.

Why would something like a casino with a strip club really bother a bunch of prostitutes?