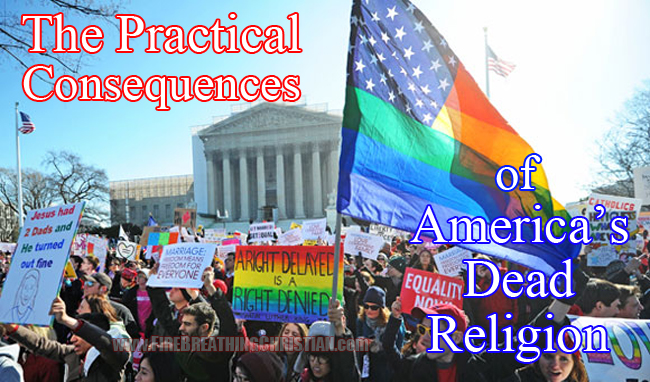 One of the more insane (and oft repeated) “arguments” as to why we cannot possibly stand firm upon the Word of God in detail and submit to the lordship of Christ in practice when it comes to the realms of law, education, economics, business, civil government, and everything else, is that such an approach “just can’t work” here in “the real world”.

More bizarre still is the sad fact that many of those spouting this most ridiculous of lines claim to be – you guessed it – Christians!

It’s mostly American “Christians” who want to keep the perfect revelation of God from defining our approach to law. They are often first in line to defend the supposed “right” of Americans to openly worship false gods…while comically claiming shock and horror at the spread of Islam, Witchcraft, and now even Satanism in America. (God does have many ways of making a point, doesn’t He?)

It’s mostly American “Christians” who want to keep the Nature of God as revealed in His Word from being the means by which we understand, define, and pursue concepts like freedom and liberty.

So is it really any wonder that we have the America that we see burning around us now?

Is it any mystery as to how each and every realm of life that American “Christians” have “protected” from the religion of Christianity has now become dominated by the anti-Christian religion of American Statism?

Is it any real surprise that an explicitly anti-Christ approach to freedom has caused the proliferation of Islam, Witchcraft, and Satanism, each of which are then used by American Statists (most of whom call themselves Christians) to paint all “radical” (meaning serious about what they believe) religions as potential threats to the State and using that threat status to justify openly persecuting…Christians who actually live out the Gospel-fueled Great Commission?

Is it then any wonder that God is even now in the process of sweeping a rebellious people defined by pride (and quite proud of that definition) from the face of His American land?

Is it really a shock that He is even now purging these prideful people from His property?

In light of all of this, are we maybe – just maybe – finally beginning to notice that here in the real world Christ is actually King?

Here in the real world – His real world – law, civil government, economics, business, art, and all the rest cannot function apart from subjugation to Him.

This is why all of the American “Christians” who will not have Christ to rule over law, civil government, economics, education, business, and the arts in detail are most responsible for leading the culture to where it is now, which is clearly under the wrath of God (see: Romans 1). These “Christians” have been exposed to the light of Scripture, and often even claim to believe in it as the Word of God. Yet they have discarded His Word in practice, modelling rebellion to a watching world only too happy to join in.

If we will not have Christ to rule over our approach to economics, our economics will produce increasing bondage and darkness.

If we will not have Christ to rule over our approach to law, our laws will strive to transform evil into good, good into evil, and lead us ever deeper into the arms of Statism.

If we will not have Christ to rule over our approach to children’s education, each successive generation of Americans will be more anti-Christian and more pro-Statist than the last…which has been the trajectory of American culture through State-run “education” for many generations now.

These are the practical, real world consequences of the dead religion we’ve embraced over and against biblical Christianity in America.

These are the practical – and purposeful – real world consequences of the religion and worldview of American Statism.

The Good News in the middle of this mess is this: In stark contrast to to the pathetic, fake little gospel that has brought us to where we are now in America stands the world-rocking, life- and culture resurrecting Gospel of Jesus Christ. That Gospel not only touches everything, but it conquers everything and reconciles everything to God – including law, economics, art, and everything else – through His people’s faithful application of His Great Commission, all by His grace and all for His glory.

That Gospel-fueled Great Commission makes plain that nothing in the real world – that being the world that God the Son really made by Himself, for Himself, and personally sustains in every moment of time for His purposes and His glory (see: Colossians 1:15-20) – nothing in that world can ever work in any lasting, meaningful way apart from explicit reliance upon and harmonious subjugation to His Nature as lovingly revealed in His Word.

This is why the Gospel command to repent and submit to Christ as Lord is so vital to every area of life…and why it is so hated by those who will not have Christ to rule over them.

It is also the core of a worldview utterly foreign to most professing Christians in America.

We are now witnessing all around us in America (and throughout the world) the very real (and real world) consequences of centuries of transition away from biblical Christianity and towards American Statism.

We all have much to repent of.

We all have a lot of reforming to do.

And God has us exactly where He wants us, so let’s get to it!

(For more on this, please consider reading The Kingdom of God vs. The (Collapsing) Empire of America and Roaring into Post-America Christianity.)