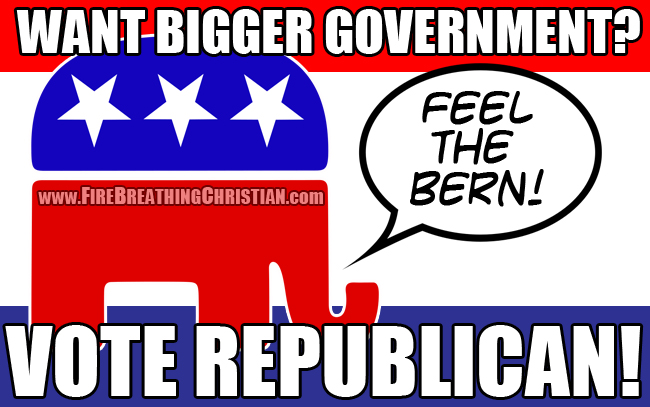 Or on the elimination of Medicare?

Or on the elimination of Medicaid?

Or on a dramatic reduction of the military industrial complex?

Or on the elimination of the property tax, through which actual home ownership is made impossible here in “the land of the free” and by which we are all made serfs and renters from the State?

Or on shutting down government-run Temples of Statism (aka “public schools”)…which just so happen to be funded by said property tax?

Why do such Republicans never ever ever campaign on most, or a handful – or even just one – of these things?

In order to assist with said wake-up process, I encourage readers to consider an excellent piece recently posted by  Ryan McMaken of the Mises Institute. The article is entitled If You Want Bigger Government, Vote Republican, and it rocks.

McMaken supplies scores of relevant facts and numbers taken in proper context and in a truly conservative spirit (meaning, he’s not cherry picking or rigging things), helping to make plain that which most devotees of the Pagan Political Right don’t tend to want made plain and, apart from the eye=opening grace of God, simply will not allow themselves to see.

Coming from a truly conservative perspective (Austrian Economics), as opposed to the decidedly non-conservative worldview permeating the upper levels (and grassroots) of the Republican Party, McMaken does a fine job of sharing and honestly addressing a plethora of brutal facts and numbers that make plain the hard truth that the Republican Party has long been consecrated to the advance of All-American big government Statism.

He kicks his awesome article off my making it clear that, despite all the public joking, laughing and propagandizing to the contrary, the Republican Party not only “feels the Bern”, it has been all about the Bern since before there even was a Bernie Sanders campaign:

One of the nice things about Bernie Sanders is that he seems to be honestly saying flat-out that he plans to massively increase the size of government.

The other candidates are probably lying either to themselves or to us  — or to both — about what they likely will do in office.

After reminding us that so-called, self-proclaimed “conservative” Republicans atop the party are actually stark raving Socialists in practice, McMaken then shines the harsh (but much needed) light of truth on the equally Statist/Socialist grassroots masses at the base of the GOP operation, revealing them to be basically as addicted to (and therefore enamored with) Statism as anyone else:

. . . Sure, many people claim to want smaller government, but as soon as the programs that benefit them directly, such as Social Security, Medicare, or military spending, are on the chopping block, the voters call their members of Congress, telling them to keep the money flowing.

This fact also illustrates how elections are useless in reforming the government if not preceded by an ideological change. The fact is that ideologically, Americans are greatly in favor of a big-spending government. The politicians who want to get elected are well aware of this, and act accordingly. If we want smaller government, we’d have to convince at least a sizable minority that it’s a good thing. But until that changes, don’t look for the next eight-year period to be much different from all the other ones in living memory.

Until and unless God supernaturally saves us from our adoration and idolatry of the American State through the power of His Gospel-fueled Great Commission, moving us to repent and submit to Him as our ruler, provider and savior in practice, the necessary prerequisite change described by McMaken will never happen.

We have a lot of work to do, Christians…beginning with our own repentance and reformation.