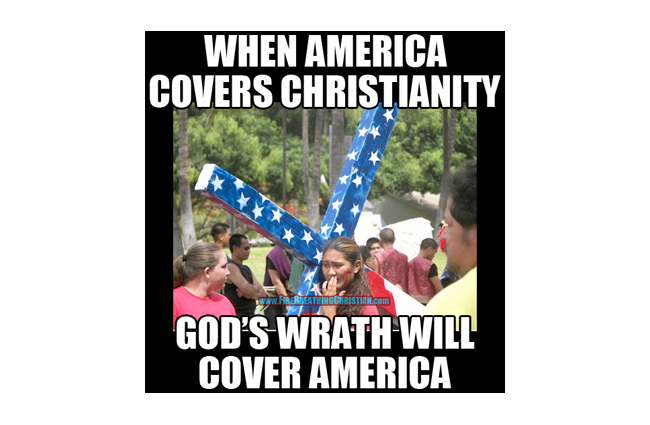 Like inviting Dracula over for dinner, inviting a Statist over to preach has its consequences.

One such consequence is the further promotion and cementing in place of the anti-Christ religion of American Statism as an ally or expression of biblical Christianity in the minds of American Christians who have for generations now been purposefully programmed to conflate secular conservatism and the Pagan Political Right with Christianity itself.

Talk about a uniquely damnable evil. American Statism has placed its adherents (and the nation they claim to adore) in the position of begging for the wrath of God like no people since Old Testament Israel. The greatest and most tragic irony in all of this is that it is American evangelicals are the loudest and proudest of defenders and advocates of the anti-Christ religion of American Statism and, as such, have become happy, compliant targets for manipulation by those preaching the false gospel of the American State as god and savior in practice.

The latest top-tier banner-waver for American Statism in the name of Jesus is Ted Cruz, a guy that I personally like very much and pray for daily, but who is, without a doubt, a stark raving American Statist. (For more on Cruz’s widely and easily documented commitment to the religious worldview of American Statism over and against biblical Christianity, please read Taking an honest, biblical sledgehammer to Ted Cruz mythology. (Part 1), The Ten Commandments of American Statism, and listen to the podcast linked through The Ted Cruz Problem: How praising the Bible without submitting to the Bible gets us into all sorts of trouble. (Fire Breathing Christian Podcast Episode 4).

As reported this morning, Senator Ted Cruz was invited to preach last weekend on the subject of “the biblical role of government” at Community Bible Church in Beaufort, South Carolina.

In Ted Cruz Preaches at South Carolina Church: “There Is a Spirit of Awakening, A Spirit of Revival… Sweeping This Country”, Gateway Pundit reported

. . . Cruz told the churchgoers after his sermon, “I could not be more encouraged by the conservatives, by the evangelicals, that are unifying behind the campaign. If conservatives stand together we’re going to win.”

If Cruz’s sermon was in line with his worldview as expressed again and again and again leading up to Sunday, then he not only set aside the biblically prescribed roles and limitations of the State, but, in true American Statist form, he once again subverted them and promoted America as the “exceptional” and necessary hope and savior of the world, all in accordance with The Ten Commandments of American Statism.

Unless Cruz’s sermon repudiated and repented of his own campaign website’s clear presentation of Statism over Christianity (as we documented here), then we can safely surmise that he was allowed to preach from a “Christian church” pulpit the anti-Christ, America-centered gospel of the State.

Oh sure, there’s no doubt that Cruz, like any good Statist preacher aiming to convert or secure Christians to the cause of Statism, sprinkled heavy doses of talk about the lordship of Christ and the authority of the Bible. Using that lingo is essential to the evangelical Statist operating behind Christian lines.

But do such “sermons” actually advocate repentance of Statism and humble, explicit submission to Christ as Lord in the realms of American law, civil government, economics, education and war?

At this point it’s probably a good idea to revisit a post we made back in September- 5 things every Statist will agree on at tomorrow’s Republican “debate”. – which included the following tidbits of hopefully helpful info:

1. They will all likely agree that State-run children’s “education” is a good thing and that it needs to be “strengthened”. Should the subject of children’s education come up, each and every Republican Statist on the stage will address the topic based on the assumption that the State (be it on a national or local level) should be managing the mind-sculpting of our children, rather than repudiating State-run children’s “education” at any level as an affront to God that cannot be tolerated anywhere in His creation. (See:Statism 101: State-run “education” makes a State-dependent population.)

2. They will all likely agree that the overtly Marxist/Socialist State-dependence-generating wealth redistribution program known as Social Security is a good thing and that it too needs to be “strengthened”. US confiscation and redistribution of wealth so that The State might better “take care of” (and thus make more dependent) the average American citizen is now a non-negotiable pillar of modern American Pagan “conservatism”. (See: How’s that Pagan “conservatism” workin’ out for ya, Christian?)

3. They will all likely agree that we need to maintain a gigantic military engaged in numerous, large scale overseas adventures…even though we are supposedly “broke”. The same “conservatives” who pretend to care about budget deficits and the mountains of debt that we’ve already buried our own children and grandchildren under do not hesitate to spend wealth that we simply do not have in order to feed a gigantic military industrial complex and pursue perpetual war overseas. Perhaps Rand Paul will be an exception here, which would be great, but listen closely for the details in what even he has to say on this. It’s nearly impossible to make a serious run at the Republican nomination while clearly tackling the rank Statism that currently defines the party’s core. (See: Problem>Reaction>Solution – Why we will beg to have our freedoms taken away and go to war forever.)

4. They will all likely agree that “traditional marriage” should be “respected” and/or “honored” in some vague, subjectively defined manner…while refusing to take a clear stand on the Word of God as the basis upon which marriage is to be understood, defined, and pursued anywhere in God’s creation, including America (yes, this includes the repudiation of “no fault divorce”. Pay particularly close attention to Statists like Mike Huckabee and Ben Carson, who routinely make reference to their personal preferences, personal faith, and “heartfelt”personal beliefs on this, that, or the other thing, including marriage, all while refusing to make the Word of God the explicit standard by which they would see marriage objectively defined and protected by civil government in America.

5. They will all definitely agree that a satanic approach to “religious liberty” – by which Satanism and Islam are “legally protected” – is a good thing. This is foundational to the religion of Statism. In the wake of the Kim Davis/”Gay Marriage” drama, the fact of Mrs. Davis’ initial clear stand on the Word and authority of God as the basis for refusing to “legalize” that which God has plainly contemned as lawless, Republican Statists will unanimously aim to conflate Davis’ initial Christ-centered position with a more vague appeal to “religious liberty”, “religious freedom”, and the “right to conscience”. In this, all Republican Statists will ironically use very Christian-sounding appeals to “religious liberty” in order to preserve the right to, among other things, freely practice Satanism and openly worship Satan in America. (See: Why do we allow the open practice of Islam, witchcraft, and Satanism in America?)

(We covered this subject in some detail in this week’s Fire Breathing Christian Podcast, which can be heard here.)

How awesome would it be if a Christian listening to an American Statist preach the Statist gospel and worldview would love them enough to confront and correct them with the true, everything-defining Gospel of Jesus Christ?

How cool would it be if someone close to Ted Cruz helped him to see the truth by loving him enough to drag his Statism into the pure light of the perfect Word of God – a Word that has clearly and  sufficiently defined the purpose, role, and limitations of civil government in stark opposition to the false religion of American Statism?

Maybe the next “Christian church” whose pulpit is given over to an anti-Christian false gospel presentation will have a listening member (or maybe two?) who love the Lord enough to stand for His Gospel and love the Statist enough to call him out on his.

May God grace us with that sort of revival in the land…while there is yet time.