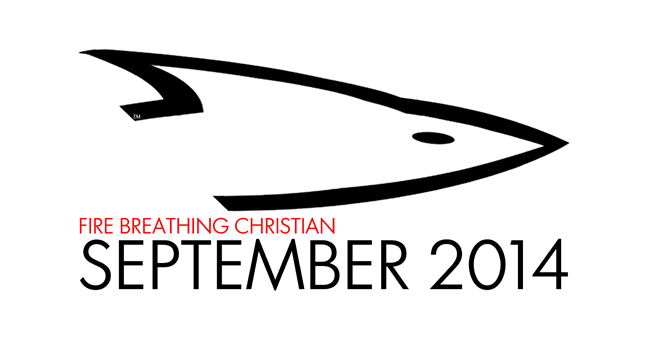 That said, here’s the rundown of articles posted in the second month of Fire Breathing Christian – September of 2014:

Happy Labor Day, Slave. (Be sure to run faster and chase harder after the “money” that your masters make out of thin air.) (September 1)

POLL: Which “conservative” news source or personality has a solid grip on reality? (September 2)

Zombie Religion and McGospel Salvation: So easy a dead man can do it. (September 3)

Why All Christians Should Own Robots (September 5)

The God who owns time (and everything in it). (September 11)

Meology vs. Theology: Putting God on Trial and Man on the Throne (September 15)

The (not so) Great I (probably) Am: The Man-Centered Myth of the “Probably God” (September 16)

The Beginning of Learning: Christ as the Essential Core of Children’s Education (September 18)

Enemy of the Statist: Christ-Centered Liberty vs. Man-Centered Tyranny (September 20)

Intro to Fire: The Power and Purpose of the Common Believer (September 22)

Well color me satanic and call me America! (Or: How our cherished religious tolerance for false gods will ultimately kill us.) (September 22)

Fiat $lavery: We have been bought and paid for…with nothing. (September 23)

The Alpha of Apologetics…and Everything Else (September 24)

Razing Hell: The Christian Call to War on Autonomy (September 25)

Remember when a bunch of naked guys on bikes riding past a crowd of little girls was a bad thing? (September 26)

Call me crazy, but I think this Islam thing just might be evil. (September 27)

So the American State has to destroy our freedom in order to protect it? Oh yeah, that makes sense. (September 27)

Remember the days when child sex advocates were flogged or jailed instead of celebrated and published? (September 29)

How ’bout that awful Patriots’ D last night? Along the Mexican border, I mean… (September 30)