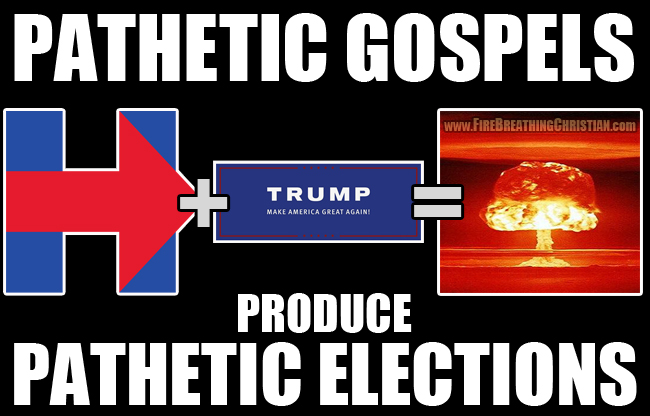 With the fear-driven American political puppet show drama about to hit its primary season peak (right on schedule), we’re well served to resist the relentless promotion of emotion-driven anxiety pitched by countless (and often “conservative Christian”) media mouthpieces and take a moment to calmly (you know, as if King Jesus is actually on His throne) assess just how it is that we’ve come to a place where Donald Trump and Hillary Clinton are likely to become the “Bible Belt” selected options from whom we will all soon be told we must choose “the lesser evil” in November.

It’s not as though this whole Trump/Clinton nightmare situation “just happened” like a grenade going off in the living room or something.

This suicidally stupid scenario has been purposefully and methodically unfolding and building over the course many years, decades, and generations. Our All-American “lesser of two evils” march to the beat of our chosen Progressive/Statist leaders has always been taking us somewhere quite specific, even if we didn’t know or didn’t want to know where it was that we were being led. And with the Trump/Clinton wave cresting and about to crash and wash over us, we’re getting yet another glimpse – whether we want it or not – as to where our precious “lesser evils” are (and have always been) taking us.

Our election processes and results over many generations of time are, like everything else in the culture, a product of our approach to the Gospel of Jesus Christ. While we were blessed with Puritan/Pilgrim founders who came to America with a victorious, optimistic, culture-resurrecting worldview centered on the Gospel-fueled Great Commission, in hindsight we can now see that almost immediately after their coming here with that vision in that context, the generations that followed began a fast and furious flight from the Christ-centered vision upon which those Pilgrims and Puritans built such a uniquely wonderful foundation. By the time of the American War for Independence, we’d already fallen far from the vision in which our roots were planted, and we’ve steadily (albeit with ups and downs along the way) gotten worse from there.

Just look back over the past several generations and witness our long standing, steadily increasing embrace of all manner of evil in the name of All-American “freedom” and “liberty”.

And America is no exception.

We will live by God’s Nature as revealed in His unbreakable Law or we will die in opposition to it.

Those are our only two options, and “We the people” – including the majority of those claiming to be “conservative Christians” – have been begging for the latter option for a very long time.

Which brings us to Clinton and Trump.

Here in 2016 America there are precious few living Americans who can even remember a time when deep Socialism wasn’t the norm (think: public schools and Social Security – just two of many glaring examples of now-normal Marxist/Socialist systems and institutions that have become entrenched and defended even by “conservative Christians” in America). After generations of State-run children’s “education” and church/pastor support of the same, is it any wonder at all that we’re where we are now? Is it any surprise that a people proudly pursuing Socialism/Statism in practice (often while condemning it with their lips) in so many flagrant, obvious ways for so very long a stretch of time would now settle (or be guided) into a place where they agree to have either Hillary Clinton or Donald Trump to lead and rule over them?

But denial is “a thing” in America, particularly in the professing Christian American subculture, whose denial of all unpleasant or challenging realities is both rooted in and a consequence of its denial of the Gospel.

The very little, very limited, and very weak false gospel of American Christianity has taken us to where we are now.

It has given us Hillary Clinton.

It has given us Donald Trump.

And as long as professing Christians continue to cling to its hollow, weak, apathetic message of preemptive surrender to the enemies of Christ, we will get even worse “lesser evils” after them. Until we reject the American way of pride and rebellion against Christ as King in practice where law, economics and civil government are concerned, we will continue to be suckers led to the slaughter by satanic counterfeits of freedom and liberty wrapped in “old glory” and paraded about accompanied by our favorite hymns of Statism.

So could it be that there is a great and beautiful silver lining being provided by God’s grace through the dark clouds now rolling over the land in the form of the Trump and Clinton campaigns?

Could it be that, through this acutely ugly chapter of a long running “lesser evil” directed production, many American Christians will finally be awakened and repent?

Could it be that through the presentation of a “choice” between two heads of a single satanic dragon to lead us – this time with one head named Donald and the other Hillary – God might graciously open the eyes and minds of those who have been so tragically deceived and so easily manipulated for so very long?

Could it be that Christians will finally ditch their denial, stop pretending and honestly engage with the many hard truths that they’ve long fought and struggled to avoid and ignore?

I believe so. I pray that this is the case.

It’s in this context that I thank God for the looming “Bible Belt” coronations of Hillary Clinton and Donald Trump.

May the Lord use this “Christian” enabled incarnation of the two-headed dragon to awaken and inspire His people to repent, reform, and resurrect a long dead American culture.