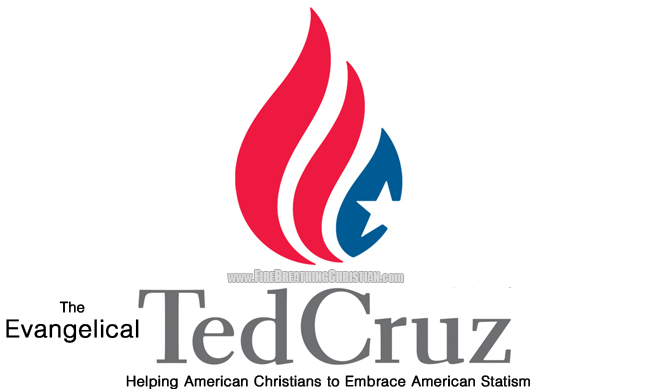 With millions of evangelicals once again offering up pretty much zero resistance as they’re herded on cue and right on schedule into a fear-fueled Pagan Left/Right paradigm box so that they might choose from the American Statists placed before them in this cycle’s installment of The American Political Puppet Show, it’s probably a good idea to take an honest, biblically informed look at the Statists most likely to whet the appetites and inspire the enthusiasm of shaken American Christians who are fearful and desperate to “do something” to somehow, some way “save America”.

Which brings us to Ted Cruz.

Which brings me to the fact that, in many ways, I really like the guy.

And I would really like for there to be a viable option for biblically sound, explicitly Christ-centered, culture-saving change made available within the Pagan Left/Right paradigm box mentioned earlier.

That would be awesome.

I have no trouble at all understanding why it is that, like the X-Files‘ Fox Mulder, people want to believe in the System of systems that we’ve been pitched and programmed to embrace as our only real hope here in “the real world”. It’s so much easier to go that route…and easy (or easier) is always very appealing, whether we like to admit it or not.

Trouble is, the Pagan Left/Right Statist paradigm in question just isn’t set up that way. It’s not designed to allow the true, explicitly Christ-centered sort of leader that I and so many of my Christian Brothers and Sisters in America yearn for. Truth be told, Christ-centered leadership is purposefully filtered out by the System of systems including the pathetic little paradigm box into which so many Americans Christians have allowed themselves to be placed through the enemy’s use of the fear of man and the fear of the world to displace the fear of the Lord that would actually save the culture. (For more on the important subject of fear and its purposeful use in propping up the All-American anti-Christ system around us, please read The Fear-Fueled Politics of American Statism, The Fear-Driven Voting of America’s “Conservative Christians” and Fear Not: The Future Is Christian.)

Now back to Senator Cruz.

In an effort to accurately understand what he’s about, I’ve read through a variety of definitively pro-Cruz resources, including every page I could find at his official campaign website.

What I’d like to start with here is a simple, clear dissection and examination of his own campaign’s positions in his own words (or at least words that he has presumably approved) in context as he has chosen to present them at his own official site.

We’ll build this installment around an examination of the content of one page at that site.

Before diving in, let me make plain two key points:

All o’ that noted, let’s get to business.

Here’s what Senator Cruz’s site has posted (as of February 10, 2016) at the “Defend Our Nation” page under the “Issues” tab, with my observations (for whatever they’re worth) added in blue (with links in red):

Lord willing and schedule permitting, I will try to share observations on other pages from the Cruz for President site sometime soon.

In the meantime, please pray for Ted Cruz!

And Barack Obama, Donald Trump, Hillary Clinton, and everyone else who is either in leadership or aspires to lead in America.

Pray that God will open their eyes and hearts to their desperate need for His Nature as defined in His Word to be the basis for understanding and pursuing everything in His creation – including law, economics, politics and civil government.

Pray that those closest to these people will love them enough to confront and correct them with the whole Gospel of Jesus Christ, as opposed to the tiny, pathetic little pre-emptively culture surrendering counterfeit that has come to define American “Christianity”.

Pray that American Christians would seize every opportunity to demonstrate that sort of true love for their neighbor, just as we’ve been commanded and equipped to do.

Pray that idols – even American idols – and idolatry – even idolatry of America – would be torn down everywhere that they are found…so that America might be saved and restored through submission to Christ, the only true and perfect Provider of peace, strength, security and prosperity.

I hope that this information is helpful and I thank those of you who support the Fire Breathing Christian mission for making this hard (and incredibly unpopular) work possible. God has been very good to us through His faithful people, and I just want to say thank you (!) to those of you who pray for and support us as you’re able.