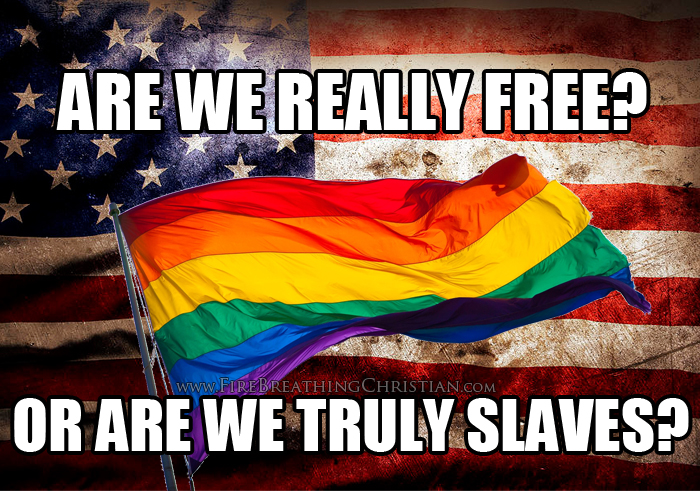 Here we are in late May of 2016, and since asking the question “Are we really free?” in last year’s Memorial Weekend post, we’ve witnessed some truly amazing developments in a still very proud and still very much unrepentant America, including:

Back to this pesky “Are we really free?” question.

We were encouraged to feel and do a lot of things on Memorial Day. We were purposefully immersed in countless emotion-provoking images, speeches and sentiments. We were encouraged to lovingly admire, support and adore our beloved American State. To that end, we were called to remember the great sacrifices made by many to secure the freedoms and liberties that we now enjoy in America.

Then we dove a little deeper down this rabbit hole in a sort of follow-up post made last July, where we again considered the question of freedom:

Are we free to ask if we’re really free in America?

The short answer to that one is, thankfully: Yes.

Here I am asking the question, after all, and here you are reading (and presumably considering) it. So yeah, at a basic level, yes, we are indeed free to openly ask if we’re really free in America.

With that established, let’s take a moment to consider how such a question is generally received by the typical American and how such inquiry is promoted (or inhibited) by the “experts”, “leaders” and countless media tools at the disposal of the American Corporate State.

In other words: Are we encouraged to ask and thoughtfully consider whether we’re really free in America? (See: Biblical decentralization of power. Learn it. Live it. Love it.)

How does the typical American State-run “school” and Corporate-run pop-culture programmed citizen address the question of freedom in America?

Well, for the most part, they tend to conflate the two. America is freedom to them. America is liberty. The thought of seriously considering, much less testing, America by a standard or definition of freedom and liberty that is apart from America strikes the typical American as something like blasphemy. You just don’t do that. You just don’t go there here in the “land of the free” and the home of the NSA.

There are many reasons, but one that we will touch on here is the aforementioned System of systems comprised of “experts”, “leaders” and Corporate-owned media mouthpieces filling the air and our minds with the “America is freedom” concept. They parrot, promote, and propagate the notion that the American State is the definer and sustainer of true liberty, true freedom, true justice and pretty much every other truly good thing. In this, they purposefully proclaim and proselytize for the American State as God in practice.

Finally, last July 4, on what we 300 million+ serfs and State-dependents laughably call “Independence Day”, hot off the heels of the Republican-led ObamaCare and “gay marriage” Supreme Court decisions, we posted 13 questions you’re NOT supposed to ask on “Independence Day” in America:

This year, “Independence Day” has much more of a funeral vibe than most could have imagined just a few months back. In the wake of America’s formal declaration of war on God and His institutions of family and marriage, we are now far less able to pretend not to notice her rank harlotry and malevolent nature. (See: “Supreme Court” Votes for Wrath of God Upon America.)

So in a Spirit of true love for America, and in direct contradiction to the spirit of the present American age, I respectfully submit for your consideration the following 13 questions you’re not supposed to ask on “Independence Day” in America (with links to articles that might help to answer these “shouldn’t-be-asked” questions):

6. What are the Corporate powers who finance, own and operate the American State doing to ramp up the economic persecution of Christians in America?(See: Corporate America’s Big Gay Push (Or: “Mark of the Beast” economics, here we come!)

8. Can Americans even own a home in America? (See: Why home ownership will never be allowed in “the land of the free” and the home of the NSA.)

So please, this weekend ask yourself: Are we really free?

Can we even really own a home in America?

Do we even have the right to private emails and phone calls in America?

Are we really just the bought and paid for pawns of those who literally create things like dollars out of thin air and then use those dollars to direct and control every aspect of our lives?

Free people would definitely be discussing these sorts of thing.

Free people would certainly seek honest, accurate answers to them.

But do we have those conversations?

Do we seek those answers?

Certainly not in State-run Public Schools, but what about in our churches and living rooms?

It’s time to think about these things.

It’s time to take off the All-American State-issued blinders and engage reality.

It’s time to repent, believe, and be saved from the bondage that we’ve been conditioned to love and defend from all critique.

It’s time to seek and submit to Christ as King in practice right here and right now.

It’s time to be free.