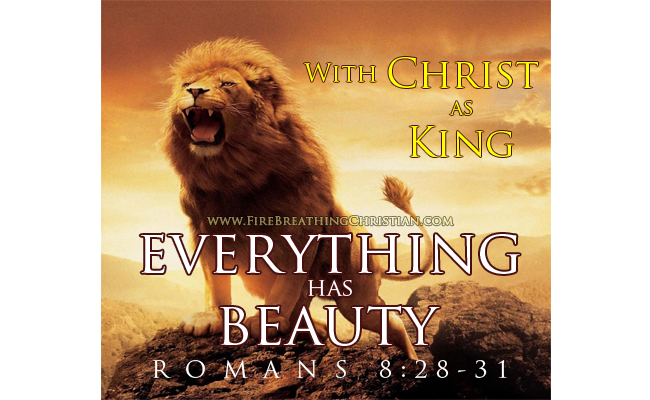 The past six months or so have been fairly wild and wacky here in America. It’s been a surreal, bizarre time in a decidedly Twilight Zone kind of way.

Without Christ as the Anchor in this storm, it’s easy to see how a typical “good conservative” (and perhaps even professing Christian) American might have gotten concerned, alarmed, or even depressed to the point of becoming unhinged over just the past half year’s time (if the half year before that didn’t already do the trick). The fear that flows from such an unhinged, desperate position is precisely what those plotting our present course hope to encourage and capitalize upon.

We’ve had the Supreme Court openly declare war on God in a bold new way via its declaration of legitimacy for “gay marriage” (pronounced gay mirage), and in the wake of that proclamation we’ve had American government run children’s education finally fully come out of the closet as officially gay itself.

We’ve watched the Boy Scouts of America get with the Big Gay program.

We’ve watched as the Girl Scouts one upped the boys by going “Transgender”.

We’ve watched a Muslim sworn into American office using a Quran instead of a Bible, a witch lead “prayer” in a Middle America legislature, and Satanists set up public monuments to the devil himself in various places across “the land of the free” and the home of the NSA.

We’ve watched the Greek economic catastrophe unfold, foreshadowing things to come for the rest of a delusional, defiant Western world.

We’ve watched the acceleration of the disintegration of language itself unfold at a mind-blowing clip, with people increasingly unable (or unhallowed) to define (much less defend) everything from gender and marriage to family and life itself.

We’ve had Corporate America continue to champion the obliteration of gender as a concept.

And all along the way we’ve watched “Christian leaders” employ the most incoherent, incompetent, and ineffective tactics imaginable in a futile, sub-biblical attempt to stem the tide of darkness that is washing over us.

But for all of this – for all of the Twilight Zone craziness and surrealism of it all – there is great hope, peace, and even joy to be had right here and right now for those who supernaturally submit to Christ as King.

Because all of this is purposeful, all of it is in accordance with God’s ultimate plan for the complete reconciliation of all of His creation, and – more specifically in a personal way for each of His people – He has each and every one of us exactly where (and when) He wants us.

While the devil and his fellow rebels may seem to be winning much these days, they are all tools. Their “victories” are not only hollow and fleeting, they are also purposefully placed pieces along a path that leads to God’s ultimate glorification and our ultimate benefit as His people.

Every vile, fraudulent pagan politician, every unjust war, every deceitful economic practice, and every act of child sacrifice perpetrated in the name of “freedom” and “liberty” in America will ultimately be used perfectly by God to demonstrate His holiness and to achieve the greatest benefit for His people.

Even the cancers and heart attacks and “accidental” tragedies that we endure here are all perfectly purposeful. When they come to us, they are anything but accidental in the truest sense. They are always exactly what we as His people need to become conformed to Christ in the specific, individually unique manner that our Father has ordained for each of us from before the foundation of the world. This has always been our assured destiny; it’s that certain and that secure in the hands of our God.

He owns it all, including His creation of time, in which we all live. (Just think about that for a minute.)

He made it all. (See: Everything orbits the Son.)

The devil and the bad guys made nothing. They own nothing. They can only pervert what God has made. They therefore get to keep nothing that is real. (See: The devil only holds what we leave in his hands.)

It’s all being reconciled to Christ by the power of the cross. Philosophy, law, art, science, technology, economics, architecture and everything else. It’s all His. He’s taking it all from His enemies by His grace through His Spirit-filled people’s faithful proclamation and application of His Gospel-fueled Great Commission. (See: The True Gospel Conquers Everything; The Modern American “Gospel”…Not So Much.)

So if you’re an actual Christian, smile.

Fear the LORD and have no fear of the world.

Then thank Him for the supernaturally supercool mission He’s given us and get to work!